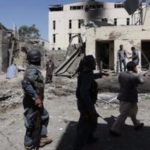 The government of Afghanistan lost almost 15 percent of its territory last year, as Taliban insurgents continued to launch attacks amid declines in U.S. and allied military personnel.

The figure is included in a government watchdog’s latest assessment of the security situation and reconstruction effort in Afghanistan. The assessment comes as the Donald Trump administration grapples with how to move forward in what has become America’s longest war.

“Analysis of the most recent data provided by U.S. Forces in Afghanistan (USFOR-A) suggests that the security situation in Afghanistan has not improved this quarter,” states the latest quarterly report from the Special Inspector General for Afghanistan Reconstruction, or SIGAR. “The numbers of the Afghan security forces are decreasing, while both casualties and the number of districts under insurgent control or influence are increasing.” END_OF_DOCUMENT_TOKEN_TO_BE_REPLACED

The danger of Russia’s intervention in Syria, and America’s timidity in Afghanistan

To hear Vladimir Putin, Russia has become the leader of a new global war on terrorism. By contrast Barack Obama seems wearier by the day with the wars in the Muslim world that America has been fighting for more than a decade. On September 30th Russian jets went into action to support Bashar al-Assad’s beleaguered troops. It is setting up an intelligence-sharing network with Iraq and Iran. The Russian Orthodox church talks of holy war. Mr Putin’s claim to be fighting Islamic State (IS) is questionable at best. The evidence of Russia’s first day of bombing is that it attacked other Sunni rebels, including some supported by America. Even if this is little more than political theatre, Russia is making its biggest move in the Middle East, hitherto America’s domain, since the Soviet Union was evicted in the 1970s.

In Afghanistan, meanwhile, America’s campaign against the Taliban has suffered a blow. On September 28th Taliban rebels captured the northern town of Kunduz—the first provincial capital to fall to them since they were evicted from power in 2001. Afghan troops retook the centre three days later. But even if they establish full control, the attack was a humiliation. END_OF_DOCUMENT_TOKEN_TO_BE_REPLACED

In a troubling report over at the Heritage Foundation entitled “U.S. Refusal to Ratify Rome Statute Vindicated by ICC Afghanistan Report,” Brett D. Schaefer and Steven Groves take a deep dive into the Office of the Prosecutor for the International Criminal Court’s annual Report on Preliminary Examination Activities, which, the scholars note, “indicates more clearly than ever before that the ICC is contemplating opening a criminal investigation that could include charges against U.S. persons.”

END_OF_DOCUMENT_TOKEN_TO_BE_REPLACED

Given the current political climate in the United States and Europe, if a military intervention in Syria were to materialize it would probably be a limited “no-fly plus” aerial bombing campaign similar to NATO’s Operation Odyssey Dawn in Libya. The overall record for such suppressive bombing campaigns has been positive, with examples that include the Balkans, pre-invasion Afghanistan, and Iraqi Kurdistan. A determinant factor in the success or failure of these campaigns has been the existence of an approximate parity between the military power of the targeted regime and the insurgent forces engaging it. “Boots on the ground” need not always be of the same nationality as the aircraft conducting strikes, but absent a capable ground opposition prospects for eroding a hostile regime and forcing its capitulation are slim. The Free Syrian Army’s (FSA) survival against Assad’s military offensives thus far seems to indicate its capability to rout regime forces if aided by international airstrikes, suggesting that the impact of hypothetical aerial intervention would be significant. END_OF_DOCUMENT_TOKEN_TO_BE_REPLACED

Afghanistan agrees to pact with Iran, while resisting agreement with US

Afghan President Hamid Karzai agreed on a cooperation pact with Iran, despite continuing to resist signing a security agreement with the U.S., Reuters reported.

Karzai made the deal with Iranian President Hassan Rouhani in Tehran Sunday.

“Afghanistan agreed on a long-term friendship and cooperation pact with Iran,” Karzai’s spokesman Aimal Faizi said, according to Reuters. “The pact will be for long-term political, security, economic and cultural cooperation, regional peace and security.” END_OF_DOCUMENT_TOKEN_TO_BE_REPLACED

European Perspective: Obama’s not to be trusted on foreign policy

Having declared an end to the War on Terror, the US president no longer has any clear idea of his country’s global role

The West can no longer rely on American leadership in the world. For the remaining duration of the Obama administration, Washington’s judgment and effectiveness in foreign policy cannot be trusted. It is quite an achievement for the one remaining superpower to appear as ineffectual and wrong-footed as the United States has managed to do in the past week. But there it is. The president’s global strategy in his second term was based on two resounding premises. First, al‑Qaeda was “on the run” having been smashed by the killing of Osama bin Laden and the successful US drone operations in Pakistan: in May, Mr. Obama gave a triumphal speech in which he declared the War on Terror officially over. END_OF_DOCUMENT_TOKEN_TO_BE_REPLACED