And secret friend of the one percent.

In last week’s State of the Union address, President Barack Obama came across as the ultimate class warrior. His domestic agenda consists of more spending on roads and infrastructure, new entitlement programs for community college and preschool, and tax preferences targeted to low- and middle-income earners. All of this he would pay for with new inheritance taxes on the wealthy, a hike in the capital gains tax, and a special levy on the biggest financial institutions.

But don’t be fooled. Obama may seem like the newest member of Occupy Wall Street—chanting “We are the 99 percent!”—but his record shows him to be a corporate liberal, and a closer look at last week’s proposals confirms it. END_OF_DOCUMENT_TOKEN_TO_BE_REPLACED 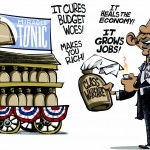 Traditionally, America has been thought of as a place of great mobility — one where anyone can conceivably grow up to be president, regardless of background. This has never been entirely true, of course. Most of our presidents have come from reasonably well-off backgrounds, and even Barack Obama, a barrier-breaker in some ways, came from an affluent background and enjoyed an expensive private-school upbringing. But the problem Kotkin describes goes beyond shots at the White House. END_OF_DOCUMENT_TOKEN_TO_BE_REPLACED

Rarely will you find a political environment as golden for a Republican policy agenda as this one. END_OF_DOCUMENT_TOKEN_TO_BE_REPLACED

Who drafts the Democratic Party’s campaign strategy? Whoever it is, they should be fired. Their 2014 plan violates a basic rule of electoral public relations: Don’t build your entire campaign around a hypocritical allegation that could blow up in your face.

I’m talking about Democrats’ unending war on the billionaires who fund right-of-center causes. Over the past month, the party’s campaign committees, PACs and allied groups have spent millions trying to link Republicans to these ostensibly evil oligarchs who are buying elections and rigging the system against the middle class. END_OF_DOCUMENT_TOKEN_TO_BE_REPLACED

By almost every measure, in fact, it’s the Democrats, not the Republicans, who are the party of the rich. END_OF_DOCUMENT_TOKEN_TO_BE_REPLACED

Income Inequality talk is not about helping the poor, its about trying to cling to power. Sadly, the American dream is in trouble precisely because of policies designed to win make career politicians, but not help grow the economy or increase opportunity.

by David A. Keene

President Obama has all but announced that this fall’s House and Senate campaigns should focus not on the collapse of American influence abroad, or on the continuing disaster that we know as Obamacare, or even on the apparent inability of his policies to create jobs, but on “income inequality.”

The mantra from the administration, like the rantings of the “Occupy” crowd and the new finger-pointing quasi-Marxist mayor of New York City, is that in today’s United States, it is impossible to get ahead unless one is born rich, works on Wall Street or finds some other way to profit from the misery of others.

Their rhetoric and proposed policies play on envy and remind one of the class warfare that has dominate European politics for so long. END_OF_DOCUMENT_TOKEN_TO_BE_REPLACED