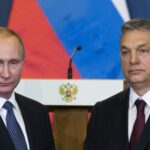 The mythological allegory of Pandora, the Greek equivalent of the Biblical Eve, the first woman on Earth, was created by Zeus as a new punishment for mankind, because of Prometheus’s theft of the fire from Heaven.  According to Hesiod’s Theogony, the Gods provided her with beautifully evil gifts to be mendacious, obstinate and weird.  As Eve was forbidden by God to consume the fruit of the “tree of knowledge” of good and evil, Pandora was not allowed by Zeus to open her gifted box ever.  Again, as in the case of Eve, Pandora could not resist the temptation and opened the box.  Her disobedience resulted in the escape of all the illnesses and deprivations that the Gods hid in the box.

Correspondingly, the gods of the fledgling Hungarian democracy, namely the voters, have since 2010 given absolute powers to a Young Democrat/Christian Democrat coalition and its leader Prime Minister Viktor Orban to steer the historically ravaged ship of the country into the safe harbor of a future free from evil.  Yet, the trust of the voters has been betrayed one more time in Hungarian history.  Viktor Orban and his party the Young Democrats have used their absolute powers to cage democracy and simultaneously to unleash all the evils of a destructive totalitarianism.

Domestically, Prime Minister Viktor Orban has pursued a form of government that he defined in his speech in 2014 at Tusvanyos illiberal democracy.  Pursuant to his definition, illiberal democracy is the idea of “Christian liberty,” which he equates with placing the common good above the traditional liberal values of individual freedoms.  According to him, this “Christian liberty” is under unrelenting attack both from within as well as from the outside.  In his opinion, Hungary as an illiberal democracy must endure undeserved onslaughts by those who push a post-nationalistic and post-Christian globalist agenda.  Thus, combining the adjective illiberal with the general political term democracy, Viktor Orban introduced a dangerous authoritarian ambiguity into the Hungarian, European and global discourse.  On the one hand, he has rendered Hungary a victim of his own misplaced righteousness vis-a-vis all those who disagree with his convoluted understanding of democracy.  On the other hand, he has designated himself as the sole defender of the common good, including the absolute arbiter of individual and societal morality.

Equally significant is the fact that Viktor Orban owns the entire Hungarian media market.  His and his party’s disinformation propaganda campaign has disseminated lies about Hungarian as well as regional history, has created confusion about past and present relations among the various ethnic groups, and fostered the false sense of revisionism in the ethnic Hungarians across the neighboring countries.  In this context, especially alarming and outrageous have been his repeated references to “being the prime minister of 15 million Hungarians.”  To add fuel to the fire of the ever present ethnic grievances that have been rooted in the peace treaties of World War I, Viktor Orban’s purely political investment strategies and his militaristic bravado have only aggravated the long-existing ethnic tensions in Central and Eastern Europe.

Clearly, Viktor Orban’s version of illiberal democracy can be characterized by its lack of civil society and by a corresponding totalitarian overreach of the political, economic, financial, religious, cultural and educational powers of the authoritarian one-party state.  Its common denominator is the irrational and self-defeating nationalism that fails to correctly gauge Hungary’s place and role in the region as well as in the European continent.  To add insult to injury, this sick Hungarian nationalism is intertwined with a non-existent Christian identity, because Christianity does not capture the political realities of today’s Hungary.

Essentially, Viktor Orban’s totalitarian regime is an extremely radical oligopoly, in which a very small number of firms are totally subordinated to the political decision making of a single individual, namely, the Prime Minister Viktor Orban.  In this absolutely centralized oligopoly, there is only very restricted competition and creativity, because the entire economy is owned by the Prime Minister himself.  Since the economy is under the rule of a single political despot, entry to the Hungarian markets is limited to the Prime Minister’s closed circuit of trusted individuals.  In this manner, Hungary is a semi-Feudal political and economic construct that is practically closed to effective as well as meaningful political, economic, intellectual and spiritual developments.

Today, amidst Viktor Orban’s totalitarian power grab and failures, his party is flailing and on the defensive.  The Young Democrats’ unity is shattering and they are in mounting disarray.  Less than a year from now, both the Prime Minister as well as his party will be forced to  account for the shameless plunder of the national wealth that they have foisted on the Hungarian people for over a decade.

By now, the majority of Hungarians are thoroughly fed up with the all powerful corruption and the limitless squandering of the national wealth by incompetent thugs masquareding as genuine businessmen and responsible politicians.  The time has come for a new political course that will steer the country toward genuine democracy and free markets.  Therefore, it is also time for the opposing majority , all across Hungary, to take back their country and truly improve the lives of the citizenry by pursuing political freedom and existential prosperity for every single man, woman and child.

This awakening to the disaster that is Viktor Orban and his Young Democrats Party must also extend to the ruinous foreign policy of Hungary.  Although Hungary is a member of NATO and the European Union, Viktor Orban has done everything in his limited powers to undermine the unity of both organizations.  In the case of the European Union, his main motivation has been to protect his corrupt regime from the oversight and scrutiny of Brussels.  Secondly, he single-handedly has prevented the European Union from imposing punitive sanctions against China and Russia.  Again, his reason has been to protect his corrupt dealings with both countries.

Concerning NATO, his close personal relationships with Presidents Putin and Xi have presented extremely serious security threats for NATO.  Presently, Budapest has become the major spy hub in Europe for Moscow as well as Beijing.  His latest decision to build a large campus for China’s Fudan University is an open invitation for President Xi Jinping to establish a permanent foothold in the middle of Europe.In Hungary, the united opposition must find a way to show the really corrupt and destructive character of the Orban regime and present a coherent vision of moving the country closer to NATO and the European Union.  In the same token, the United States of America and all the member states of the European Union must unite in helping Hungary to find its way out of the Orbanian cul-de-sac.  Jointly, they also must assure that the national wealth that has been stolen and embezzled so brazenly from the Hungarian people in the last decade be returned to them, and that individuals who committed those crimes be called to full account.  Only with such solidly unified assistance will Hungary be able to really rejoin the Free World of democratic nations.