For 2014, Cost of Government Day falls on July 6, the sixth consecutive year it comes in the seventh month of the year. Prior to President Barack Obama coming to office, the group said in a release, the latest date it had ever fallen was June 27. END_OF_DOCUMENT_TOKEN_TO_BE_REPLACED

Federal tax revenues continue to run at a record pace in fiscal 2014, as the federal government’s total receipts for the fiscal year closed April at $1,735,030,000,000, according to the Monthly Treasury Statement.

In the month of April itself, which usually sees the peak tax revenues for the year, the federal government ran a surplus of $106.853 billion. While taking in $414.237 billion in total receipts during the month, the government spent $307.383 billion.

When Ronald Reagan took over from Jimmy Carter in ’81, things were actually worse economically compared to when Obama took over from George W. Bush in ’08. END_OF_DOCUMENT_TOKEN_TO_BE_REPLACED

There has been some slippage over the years. The 16th Amendment allowing the income tax opened the door to truly European, supersized government. END_OF_DOCUMENT_TOKEN_TO_BE_REPLACED

For 20 years, the index has measured a nation’s commitment to free enterprise on a scale of 0 to 100 by evaluating 10 categories, including fiscal soundness, government size and property rights. These commitments have powerful effects: Countries achieving higher levels of economic freedom consistently and measurably outperform others in economic growth, long-term prosperity and social progress. Botswana, for example, has made gains through low tax rates and political stability. END_OF_DOCUMENT_TOKEN_TO_BE_REPLACED

by S.A. Miller and Geoff Earle

The cost of President Obama’s massive health-care law will hit Americans in 2014 as new taxes pile up on their insurance premiums and on their income-tax bills.

Most insurers aren’t advertising the ObamaCare taxes that are added on to premiums, opting instead to discretely pass them on to customers while quietly lobbying lawmakers for a break.

But one insurance company, Blue Cross Blue Shield of Alabama, laid bare the taxes on its bills with a separate line item for “Affordable Care Act Fees and Taxes.” END_OF_DOCUMENT_TOKEN_TO_BE_REPLACED 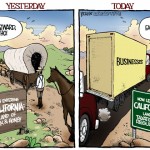 Move to low-tax state of Tennessee a real eye opener

In June of 2006, I deserted my long-time friend and love of my life, California, for the unknown venue of Tennessee. The push and the pull of the two locations are pretty obvious — taxes. Tennessee, like Texas, has no state income tax, no state capital gains tax, lower property taxes, lower workers’ compensation costs and roughly the same sales tax rate. California, on the other hand, is just simply tax- and fee-crazy.

But in spite of all the tax, fee and regulatory reasons for leaving California, I was deeply concerned that I would be stranded in an uneducated, lawless morass of tobacco-chewing Neanderthals driving old clunkers on dirt roads where churches were on every street corner and there wasn’t a hospital to be found. END_OF_DOCUMENT_TOKEN_TO_BE_REPLACED

The 100 Year Anniversary of the Income Tax

Many unhappy returns began a hundred years ago, in October 1913.

For a century and a quarter, the United States avoided an income tax. Thomas Jefferson warned against such “internal” taxes, saying that under the British they had “filled our land with officers and opened our doors to their intrusions.” Until the early 20th century, a small federal government relied on import duties and taxes on alcohol and tobacco for most of its revenue. END_OF_DOCUMENT_TOKEN_TO_BE_REPLACED

In his short essay, which you can read yourself here, Bennett tells us why it is important not to default on commitments made to those who have lent the U.S. money, and indeed it is. He neglects to mention the spending that made this borrowing necessary – spending to which he was a major contributor. When Bennett took office, the national debt stood at about $6 trillion. By the time he left it had grown to about $14 trillion.  During his 18 years in the Senate, Bob Bennett voted for 132 out of 133 appropriations bills on final passage in the Senate. Appropriations bills are the bills that actually spend the money.   The size of this debt and its growth trend is what should concern us far more than today’s fight. The Congressional Budget Office projects that by 2038, public debt will reach 100% of GDP. END_OF_DOCUMENT_TOKEN_TO_BE_REPLACED

Debt-ridden California needs every cent it can squeeze out of its taxpayers. The government unions that control the state through the Democratic Party are the highest paid state government employees in the nation. Despite being near the bottom in student academic achievement, California is near the top on per-pupil spending. And that $68 billion high-speed train to nowhere that the state is building in the Central Valley won’t pay for itself.

When a state appeals court recently ruled that a 19-year-old tax break for small businesses was unconstitutional, the state’s Franchise Tax Board began going after small business investors for an estimated $120 million in back taxes. “A lot of them don’t have that money anymore. Its been reinvested,” California’s National Federation of Independent Businesses Legislative Director Ken DeVore told CBS News. “It sends a message that you can’t trust government. If you comply in good faith with the rules, they can go back and penalize you.” END_OF_DOCUMENT_TOKEN_TO_BE_REPLACED