The Senate will vote this week on Senator Tom Udall’s (D-NM) constitutional amendment that would give Congress unlimited power to regulate—and control—how individual Americans spend money while speaking out about politicians and government. END_OF_DOCUMENT_TOKEN_TO_BE_REPLACED 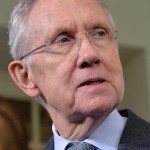 But the Senate will have almost no time to do anything. “Following the August recess, we’re going to be here for two weeks and two days,” Majority Leader Harry Reid told colleagues before the break, according to an account in The Hill. “That’s not a lot of time for the workload we have to do.” END_OF_DOCUMENT_TOKEN_TO_BE_REPLACED