A Lakeland, Colorado citizen’s group filed suit Thursday in federal court challenging the constitutionality of a city law regulating the organization’s reporting on candidates in its newsletter.

Attorneys with the Institute for Free Speech who are representing the Lakewood Citizens Watchdog Group said the city’s requirement for the newsletter to identify donors and to include campaign disclaimers in its articles because the cost of publishing and distributing it crossed a $500 threshold violate the First Amendment.

“If the council can redefine reporting and commentary as campaigning, it can punish news outlets that criticize candidates in the months leading up to an election. Congress and the state of Colorado both exempt the media from their campaign finance laws to avoid this precise outcome,” said Institute for Free Speech Senior Attorney and Deputy Vice President for Litigation Owen Yeates said in a release.

The suit asks the court to find the newsletter, The Whole Story, is protected by the constitutional guarantees of free speech and a free press and that the $3,000 fine it was assessed for violating a local ordinance is unconstitutional.

From 2015 to 2018, the Watchdog published The Whole Story without encountering any problems. In 2019 the city council passed an ordinance imposing regulations on any entity spending more than $500 on communications that mentioned a candidate for office within 60 days of a municipal election.  As the new rule made no exemption for the media, it became impossible for the group to report on local elections without potentially being forced to register with the city, publish disclaimers on articles, and expose their supporters, its attorneys said.

The Watchdog’s fall 2019 issue, which covered that November’s elections for mayor and city council, was found by a city adjudicator to be guilty of making “unambiguous references to current candidates” in The Whole Story and ordered to pay $3,000 in fines. To cover future local elections, the group would have to file invasive reports about its supporters with city officials and print campaign-style disclaimers in its newsletter.

While Lakewood’s laws pose a threat to any media outlet, the people behind The Watchdog are not surprised they were targeted first. “We report stories other media outlets won’t, and we aren’t afraid to blow the whistle on the city government. The council may not like it, but that’s what the First Amendment is for,” Dan Smith, president of the Lakewood Citizens Watchdog Group said.

“By failing to exempt news gathering and reporting from its campaign finance laws, Lakewood has unconstitutionally infringed on the freedom of the press,” the group’s brief says. “That freedom is essential to a functioning democracy, even more so in the context of elections. Politicians may wish to control who can speak about them, but they can’t regulate The Whole Story.”

The Watchdog is an independent publication mailed to Lakewood residents two to three times per year, with a circulation of approximately 22,000. The case is Lakewood Citizens Watchdog Group v. City of Lakewood.

Conservative Criticism of Fox Is Unfair and Unbalanced

For some unexplainable reason, conservatives rush towards fratricide with the same kind of urgency that drives lemmings over the edge of the cliff. It’s what they do, even when it’s counterproductive and costly.

Conservatism was not made better off by the four-year campaign waged against Speaker Newt Gingrich by some House conservatives who considered him ideologically unreliable. It was not helped by John Boehner’s premature departure from Congress, brought about by the continual political headaches caused by House Republicans on his right flank who branded him an establishment sellout even after he forced President Obama to agree to nearly draconian spending cuts without giving up much in return.Recommended

A small group of so-called purists on the right even crossed swords with Ronald Reagan, without whom modern conservatism would have emerged stillborn after the thumping Barry Goldwater received in 1964 from Lydon Johnson.

Since Reagan, the GOP has marketed itself as the party of ideas and open debate. His eight years in the White House transformed the world as well as the U.S. government. He created a revolution the results of which progressives are still trying to roll back. His policies led to the rebirth of the American economy and the national spirit; millions of new jobs and small businesses were created; and the Cold War concluded in a way many did not think possible. Many forget that when Whittaker Chambers broke with the Soviets, he thought he was leaving the winning side of the struggle to join with the losers.

In the light of what appears to be Donald Trump’s defeat in his bid for reelection, conservatives are now turning on Fox News, a channel where I once appeared with some frequency back in the 1990s, over its supposed ideological apostasy.

What nonsense. Fox was never an explicitly conservative organization but, as conceived by Rupert Murdoch and brought to life by Roger Ailes, it was successfully positioned as the counterpunch to the overtly liberal networks that dominated the media: CBS, ABC, NBC, and CNN.

It was a needed, even necessary, addition to the nation’s information stream. The opinion side of the network leans heavily to the right but the newsgathering operation plays it mostly down the middle, remembering the need for balance because every story has at least two sides.

As a programming strategy, it works. The network is a financial and ratings juggernaut embraced by conservatives because Fox News gave their agenda and personalities a fair hearing. Now, because the network’s decision desk called Arizona — a state critical to Trump’s re-election prospects — for Joe Biden on election night, some so-called true believers are encouraging those of like mind to turn to other channels.

This is fratricidal and foolish. With Biden probably coming into the White House with a progressive to-do list that includes wiping out the gains made since the Reagan years, the plan to isolate Fox, one of the few places in the major media where conservative ideas can be discussed openly and without the anchors sniping at them, is silly, What other news outlet covers the deeds and misdeeds of national Democrats with the same enthusiasm that MSNBC, the New York Times, and the rest of the mainstream media go after the Republicans?

The liberal narrative has always been that Fox is the voice of the right. They’re still saying it, as David Brock’s Media Matters for America made clear in a recent email, saying:

As President-elect Joe Biden’s electoral vote margin and popular vote margin grew last weekend, President Donald Trump tweeted clips and quotes from Fox programs that were laced with misinformation and conspiracy theories about the election. Since that time Fox News propagandists have promoted a variety of conspiracy theories and baseless claims of voter fraud. Once again, Trump is amplifying the work of Fox to falsely claim that he won the election.

If the right turns its back on Fox, it would be an act of rank stupidity. The decision to put Arizona in the Biden camp did not, as some have claimed, affecting the voting in Nevada. It didn’t happen until the polls were closed and, anyway, it looks to have been the correct call – a potential recount and allegations of irregularity notwithstanding.  As far as the alleged betrayal of conservative interests goes, has any other news channel given the kind of attention to the still-unfolding Hunter Biden scandal it has? Tucker Carlson’s hour-long interview with Tony Bobulinski, the whistleblower providing the goods on Hunter Biden and the Biden family’s alleged international corruption, was seen by more people than any other interview in recent memory.

The Bobulinski revelations wouldn’t be covered by “60 Minutes” or Rachel Maddow or Anderson Cooper. If anything, they’d be covered up, just as the debilitating consequences of the Democratic lockdowns and the real objectives of Black Lives Matter and antifa have been. The Big Tech progressives who got Biden elected don’t want conservative opinions appearing anywhere any more than they want the truth about the left to be aired.  That’s what the cancel culture is about.

In a battle for all the marbles, conservatives can ill afford to limit their reach. Cutting off Fox in favor of small outlets – some of which I do appear on currently – is like cutting off one’s nose to spite one’s face. The right needs to build its network, not cut it back. The perfect should not be the enemy of the good. If anything, conservatives should be looking to expand their reach and finding ways to defeat the progressives. Energy spent on fighting the movement’s allies is energy wasted.

Now that we know she edited the emails before turning them over, the entire record is suspect.

Clinton scandals have a way of bumping and rolling along to a point where nobody can remember why there was any outrage to begin with. So in the interest of clarity, let’s take the latest news in the Hillary email escapade, and distill it into its basic pieces:

• Nothing Mrs. Clinton has said so far on the subject is correct. The Democratic presidential aspirant on March 10 held a press conference pitched as her first and last word on the revelation that she’d used a private email server while secretary of state. She told reporters that she’d turned over to the State Department “all my emails that could possibly be work-related.” And she insisted that she “did not email any classified material to anyone on my email. There is no classified material.”

Not true and not true. The State Department has now admitted that it is aware of at least 15 work-related emails that Mrs. Clinton fully or partially withheld. END_OF_DOCUMENT_TOKEN_TO_BE_REPLACED

Each week seems to bring another incident. Who will the thought police come for next?

Welcome to the Dark Ages, Part II. We have slipped into an age of un-enlightenment where you fall in line behind the mob or face the consequences.

How ironic that the persecutors this time around are the so-called intellectuals. They claim to be liberal while behaving as anything but. The touchstone of liberalism is tolerance of differing ideas. Yet this mob exists to enforce conformity of thought and to delegitimize any dissent from its sanctioned worldview. Intolerance is its calling card.

Each week seems to bring another incident. Last week it was David and Jason Benham, whose pending HGTV show was canceled after the mob unearthed old remarks the brothers made about their Christian beliefs on homosexuality. People can’t have a house-flipping show unless they believe and say the “right” things in their life off the set? In this world, the conservative Tom Selleck never would have been Magnum, P.I. END_OF_DOCUMENT_TOKEN_TO_BE_REPLACED 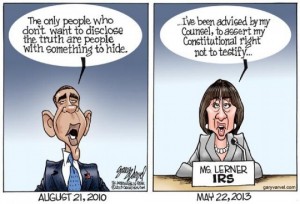 The timeline of the Internal Revenue Service targeting of conservative groups reveals nothing less than a scandal. It is a scandal that blew into public view a year ago this week and about which the press has been far from curious.

In January 2010, the president in his State of the Union Address publicly berated the six Supreme Court justices in attendance for their decision in Citizens United, which held that the First Amendment prohibits the government from restricting independent political expenditures by corporations and labor unions. END_OF_DOCUMENT_TOKEN_TO_BE_REPLACED