Is Pres. Obama locked in a victim mentality? 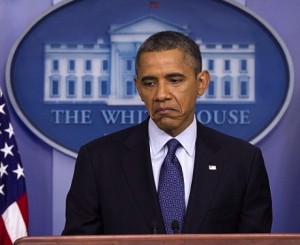 Editor’s Note:  In 2009, Obama forbid the term “war on terror” within his administration. In the years that have followed, Obama has been reluctant to use the word “terrorist” or “terrorism” to describe those who use bombs to attack women and children like in the Boston Marathon terrorist attack. But Obama and his spokesmen and allies have used words like: terror, terrorist, and bombs strapped to their chest with great ease and frequency the past few weeks. Dr. Ablow provides an interesting and revealing explanation for this curious behavior — particularly given that in the end the Republicans were simply bargaining for Congress and the Executive Branch to abide by the ObamaCare law like everyone else. The idea that those who govern should have to abide by the same laws as everyone else is hardly the stuff of terrorism.

President Obama’s rhetoric is finally coming closer to what appears to be his psychological truth: Because America victimized him and countless millions of others, any person or party or movement that opposes his views and does not yield to him is not just his adversary, but abusive, predatory and even threatening.

Again and again, President Obama has described members of Congress who insist on fiscal responsibility as having taken “hostages,” “demanding a ransom,” using “extortion,” and threatening to “blow up” the government. END_OF_DOCUMENT_TOKEN_TO_BE_REPLACED

Barack Obama is the world’s most inept and feckless leader. This is not merely my opinion. Any serious review of the facts reveals inescapably that the official, yet unspoken, position of the Obama White House is that Barack Obama is completely incompetent.

Of course, Barack Obama didn’t hold a press conference and explicitly admit that he is an incapable bungler. But if you believe Obama’s and his Administration’s explanation for everything from the Benghazi attacks, to the related cover-up and whistleblower threats, to the recent IRS scandal, they are implicitly admitting that Obama is the weakest, most ineffectual president ever.

UPDATE:  CBS News is now reporting that Obama administration officials say that mistakes made in responding to the Benghazi incident reflect “incompetence rather than malice or cover up.” “We’re portrayed … as either being liars or idiots,” an anonymous Obama Administration official said and then admitted, “It’s actually closer to us being idiots.” How bad do things have to be before an Obama official is willing to cop a plea to being “idiots?”