If the deal approved, this much is certain — Iran will obtain nuclear weapons, terrorism will increase, an arms race in the Middle East will ensue, and America and our allies will be far less secure.

by George Landrith   •   President of Frontiers of Freedom

Under the agreement now being celebrated by the Supreme Leader of the Islamic Republic of Iran, Ali Khamenei, and by the President of the United States, Barack Obama, Iran will become a nuclear power in 15 years — perhaps sooner. Even the Obama administration admits that Iran could have nukes within about one year, if it cheats on the agreement. But in any event, the deal paves the way for Iran to have nukes in 15 years — all with the world’s approval and blessings.

If 15 years sounds like a long time, think about your young child, grandchild, niece or nephew and ask if their world will be a safer place if the Islamic Republic of Iran has nuclear weapons when that child is in from high school.

Former Democratic Vice Presidential Candidate and former Senator Joseph Lieberman testified before Congress this week, “The agreement …ultimately allows Iran to become a nuclear weapon state, and indeed legitimizes Iran’s possession of nuclear weapons….  This is a bad deal for America, a bad deal for Iran’s neighbors in the Middle East, and a bad deal for the world.”  END_OF_DOCUMENT_TOKEN_TO_BE_REPLACED

The Islamic Republic of Iran is exploiting the thaw in relations to penetrate Iranian-American neighborhoods in the United States. The regime has already established a beachhead in the largest Iranian community in the U.S., the Westwood neighborhood of Los Angeles (LA) aka Tehrangeles.

Pro-regime operatives are circumventing U.S. laws prohibiting doing business with Tehran. They are flooding Farsi language Media outlets with commercial advertisements. These operatives are employing deceptive tactics to hoodwink Department of Justice authorities by placing in storefront windows advertisements of services with different messages in English than in Farsi. END_OF_DOCUMENT_TOKEN_TO_BE_REPLACED

How America Can Help To Stop the War in Gaza

To bring about real peace, drop the false narrative of moral equivalency and focus on the real culprits.

Here’s a bit of wisdom that cannot be repeated often enough: Deliberately targeting civilians is a war crime. If you don’t believe me, ask U.N. Secretary General Ban Ki-Moon, who was adamant on this point last year, when Syria’s president Assad, aided by Hamas’ brethren Hezbollah, engaged in the very same tactics we now see coming out of Gaza, albeit with much more devastating results. And if that’s not enough, consider a regime that targets not only the enemy’s civilians but also its own: Appearing on TV the other day, Hamas spokesman Sami Abu Zuhri waxed poetic about the merits of using men, women, and children as human shields, a heinous tactic that puts every civilian in Gaza in needless risk.

The world has repeatedly—and rightly—asked that Israel take measures to protect the civilian population of Gaza. Israel chooses its targets very carefully, and, knowing that Hamas’ cowardly creeps would have likely stacked every strategic building with armfuls of kids, according to the instructions of its leaders, it takes extraordinary measures to provide ample warning before each strike. These include text messages and calls, leaflets dropped from above, and “knock on the roof” measures, or firing flares to signal an upcoming strike. END_OF_DOCUMENT_TOKEN_TO_BE_REPLACED

The stories are critical to understand the inability of the US and its allies to successfully end the terrorist regime in Tehran and stop its nuclear ambitions. END_OF_DOCUMENT_TOKEN_TO_BE_REPLACED

The Agony of Iran’s Militant Mullahcracy

On February 1, 1979, the Shi’a cleric, Ruhollah Musavi Khomeini, flew from his exile in a Paris suburb to Tehran to fill the political vacuum created by the sudden departure of the long reigning monarch, Shah Mohammad Reza Pahlavi, on January 17, 1979. His return was widely popularized in the Western media and by his acolytes as the long overdue genesis of Iran’s transformation from a dictatorial and antediluvian monarchy into a modern, secular democracy. In reality, Khomeini’s rhetoric was merely a revolutionary hoax, an opportunistic and inchoate attempt to turn a politically deeply divided, and thus chaotic country into a sham religious autocracy, characterized by totalitarianism at home and terrorism abroad. END_OF_DOCUMENT_TOKEN_TO_BE_REPLACED 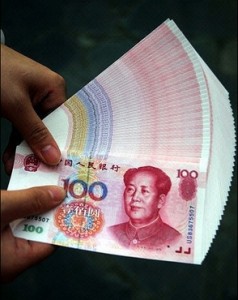 There has been considerable disagreement about whether the interim arrangement, which partially freezes Iran’s nuclear program, is a good deal for the international community. Beijing’s enthusiasm is sufficient evidence that it is not: China is Iran’s best big-power friend, and if Hua is to be believed, then Beijing thinks it has just scored a triumph for its friends in Tehran. END_OF_DOCUMENT_TOKEN_TO_BE_REPLACED 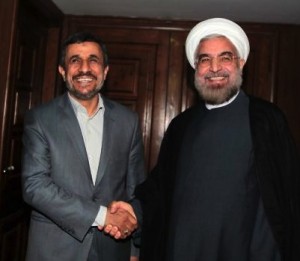 The search, now 30 years old, for Iranian “moderates” goes on. Amid the enthusiasm of the latest sighting, it’s worth remembering that the highlight of the Iran-contra arms-for-hostages debacle was the secret trip to Tehran taken by Robert McFarlane, President Reagan’s former national security adviser. He brought a key-shaped cake symbolizing the new relations he was opening with the “moderates.”

We know how that ended.

Three decades later, the mirage reappears in the form of Hassan Rouhani. Strange résumé for a moderate: 35 years of unswervingly loyal service to the Islamic Republic as a close aide to Ayatollahs Khomeini and Khamenei. Moreover, Rouhani was one of only six presidential candidates, another 678 having been disqualified by the regime as ideologically unsound. That puts him in the 99th centile for fealty.

Rouhani is Khamenei’s agent but, with a smile and style, he’s now hailed as the face of Iranian moderation. END_OF_DOCUMENT_TOKEN_TO_BE_REPLACED