A Harsh Referendum for Obama 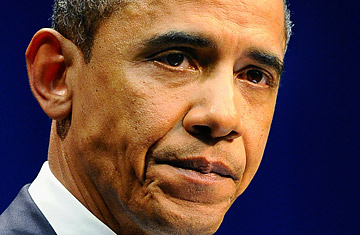 President Barack Obama hoped the midterm elections would help break the capital’s gridlock. Instead, they became a referendum on his presidency.

Voters went to the polls Tuesday deeply frustrated with the political system and handed Republicans a decisive victory. Mr. Obama was a central figure in key races where Republicans criticized his leadership.

Most Democratic Senate candidates refused to appear with Mr. Obama on the campaign trail, trying to distance themselves from an unpopular president. Democrats tried to keep the focus on policies of particular importance in their states.

Mr. Obama campaigned with just one Democrat running for the Senate—at a rally last weekend in Michigan, where his party’s nominee was widely expected to win. Mr. Obama said during the campaign season that while he wasn’t on Tuesday’s ballot, his policies were.

Republicans sought to make their races about both Mr. Obama and his policies. The president’s health-care law was the top issue in pro-Republican television ads run in four of 11 competitive Senate races this cycle, according to an analysis of Kantar Media/CMAG data by the nonpartisan Wesleyan Media Project.

In a Wall Street Journal/NBC News poll released this week, 67% of registered voters said they want to see Mr. Obama change the direction he is leading the country “a great deal” or “quite a bit,” while just 42% approved of the job he is doing.

The president now finds himself seeking to rebound with a public that, however they voted Tuesday, is deeply dissatisfied with his leadership.

Other presidents have made significant changes after midterm elections. George W. Bush replaced his defense secretary, Donald Rumsfeld , after Republicans lost control of Congress in 2006 midterm elections that were dominated by deep voter disapproval of the Iraq war.

Ronald Reagan replaced several top aides with fresh advisers after Democrats took control of the Senate in 1986 and tasked them with repairing his standing with the nation and netting policy accomplishments in his last two years.

Bill Clinton bucked the second-term trend when Democrats made gains in the 1998 midterm elections. But his party had suffered brutal losses in 1994, prompting his White House to recalibrate its agenda.

Compared with recent predecessors, however, Mr. Obama has faced historically large losses for his party in Congress over his time in office.

It is unclear the extent to which the dynamic in Washington will shift, if it does at all, after the GOP takeover of Congress.

“It’s not going to be radically different from prior to the election, which is partisan gridlock,” said Mike McCurry, who was President Clinton’s press secretary during the 1994 midterm elections. For Mr. Obama, Mr. McCurry said, “the thing to do is articulate a very crisp and achievable agenda and go after it.”

White House officials have already begun what they call a year-end analysis of how 2014 has gone for Mr. Obama and what his team would have done differently, in everything from policy and politics to communications.

Mr. Obama will be increasingly challenged to find a governing strategy that navigates the diverging interests between a second-term president trying to secure a legacy and lawmakers in his own party who face another election in 2016. While Mr. Obama may want to compromise with Republicans. But Democrats hoping to win elections in two years may not believe that is in their best political interest.

Ohio Republican Sen. Rob Portman discusses the potential for GOP majority and what the party’s agenda will be. Photo: Getty.

“If he wants to accomplish something in the last two years it can’t just be within the executive branch, so he has to engage and he has to lead,” said Ken Duberstein, an aide to President Reagan. “Governing is sometimes saying no to your strongest supporters and yes to your strongest opponents.”

Mr. Obama isn’t expected to demand a major shake-up inside his administration or dramatically shift his governing approach in response to Tuesday’s results. One of the challenges he confronts immediately is how to balance being a president seeking to work with Congress while also accomplishing policy changes on his own.

His first critical test could come when he announces his executive action on immigration, a move he is expected to make after returning later this month from a week-long trip to Asia. The details could set the tone for relations between the White House and Congress over the next two years.

The White House recognizes that a move on immigration could alienate Republicans whose support the president will need for other priorities. White House officials are considering how far the president should go in unilaterally changing immigration policy. To minimize GOP backlash, they plan to have the president make clear that if Congress passes immigration legislation he would immediately roll back his executive orders.

The president’s legislative priorities include funding for infrastructure projects—which the White House hopes would come from revenue generated through changes to the tax code—cybersecurity and the patent process. His aides hold out hope that Republicans will soften their opposition to raising the minimum wage, and want to leave political space for a deal on immigration, officials said.

One of Mr. Obama’s first announcements after Tuesday’s results is expected to be naming a nominee for attorney general. White House officials say they haven’t decided whether to push through the nomination process during the lame-duck session or wait for the new Congress next year.

Like many second-term presidents, Mr. Obama is expected to focus heavily on foreign policy. He leaves Sunday for an eight-day trip to China, Myanmar and Australia that is seen as critical to his effort to strengthen U.S. ties to the region. Mr. Obama is also seeking a nuclear deal with Iran and is preparing to mark the end of the U.S. combat mission in Afghanistan at the end of the year.

The core of his foreign policy agenda is likely to focus on counterterrorism efforts in the Middle East and North Africa, including the U.S.-led operation against Islamic State.

Colin Powell, who served in President Reagan’s national security team after the 1986 midterm elections, said “there are always opportunities” for presidents in foreign policy.

“What you need is a strong structure, a process that everybody understands, and then you have to make sure that everybody executes along the line that’s been decided on,” Mr. Powell said in describing his effort to help Mr. Reagan regain his footing.

All the while, Mr. Obama will be cultivating his political legacy, aides said. His goal is to make progress on core Democratic issues, such as gay rights, immigration and economic fairness. He is likely to deliver a speech next year laying out his vision for the next phase of Democrats’ tightening of Wall Street regulations.