A history of targeting conservatives … 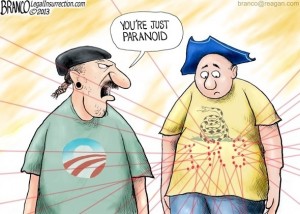 The White House insists President Obama is “outraged” by the “inappropriate” targeting and harassment of conservative groups. If true, it’s a remarkable turnaround for a man who helped pioneer those tactics.

On Aug. 21, 2008, the conservative American Issues Project ran an ad highlighting ties between candidate Obama and Bill Ayers, formerly of the Weather Underground. The Obama campaign and supporters were furious, and they pressured TV stations to pull the ad—a common-enough tactic in such ad spats.

What came next was not common. Bob Bauer, general counsel for the campaign (and later general counsel for the White House), on the same day wrote to the criminal division of the Justice Department, demanding an investigation into AIP, “its officers and directors,” and its “anonymous donors.” Mr. Bauer claimed that the nonprofit, as a 501(c)(4), was committing a “knowing and willful violation” of election law, and wanted “action to enforce against criminal violations.”

AIP gave Justice a full explanation as to why it was not in violation. It said that it operated exactly as liberal groups like Naral Pro-Choice did. It noted that it had disclosed its donor, Texas businessman Harold Simmons. Mr. Bauer’s response was a second letter to Justice calling for the prosecution of Mr. Simmons. He sent a third letter on Sept. 8, again smearing the “sham” AIP’s “illegal electoral purpose.”

Also on Sept. 8, Mr. Bauer complained to the Federal Election Commission about AIP and Mr. Simmons. He demanded that AIP turn over certain tax documents to his campaign (his right under IRS law), then sent a letter to AIP further hounding it for confidential information (to which he had no legal right).

IRS’s Lois Lerner had history of harassing and targeting conservatives at FEC:

Perhaps no other IRS official is more intimately associated with the tax agency’s growing scandal than Lois Lerner, director of the IRS’s Exempt Organizations Division. Since admitting the IRS harassed hundreds of conservative and Tea Party groups for over two years, Lerner has been criticized for a number of untruths—including the revelation that she apparently lied about planting a question at an American Bar Association conference where she first publicly acknowledged IRS misconduct.

Still, Lerner has her defenders in the government and the media. Shortly after the scandal broke, The Daily Beast published an article headlined “IRS Scandal’s Central Figure, Lois Lerner, Described as ‘Apolitical.’” Insisting Lerner, and the IRS more broadly, were not not politically motivated has been a central contention of those trying to minimize the impact of the scandal.

The trouble with this defense is that, prior to joining the IRS, Lerner’s tenure as head of the Enforcement Office at the Federal Election Commission (FEC) was marked by what appears to be politically motivated harassment of conservative groups.

Lerner was appointed head of the FEC’s enforcement division in 1986 and stayed in that position until 2001. In the late 1990s, the FEC launched an onerous investigation of the Christian Coalition, ultimately costing the organization hundreds of thousands of dollars and countless hours in lost work. The investigation was notable because the FEC alleged that the Christian Coalition was coordinating issue advocacy expenditures with a number of candidates for office. Aside from lacking proof this was happening, it was an open question whether the FEC had the authority to bring these charges.

James Bopp Jr., who was lead counsel for the Christian Coalition at the time, tells THE WEEKLY STANDARD the Christian Coalition investigation was egregious and uncalled for. “We felt we were being singled out, because when you handle a case with 81 depositions you have a pretty good argument you’re getting special treatment. Eighty-one depositions! Eighty-one! From Ralph Reed’s former part-time secretary to George H.W. Bush. It was mind blowing,” he said.

One of the most shocking things about the current IRS scandal is the revelation that the agency asked one religious pro-life group to detail the content of their prayers and asked clearly inappropriate questions about private religious activity. But under Lerner’s watch, inappropriate religious inquiries were a hallmark of the FEC’s interrogation of the Christian Coalition.  According to Bopp’s testimony:

FEC attorneys continued their intrusion into religious activities by prying into what occurs at Coalition staff prayer meetings, and even who attends the prayer meetings held at the Coalition. This line of questioning was pursued several times. Deponents were also asked to explain what the positions of “intercessory prayer” and “prayer warrior” entailed, what churches speciﬁc people belonged ….

[T]hree pastors from South Carolina … were … continually asked about the associations and activities of the members of their congregations, and even other pastors.

Bopp’s testimony includes this transcript of the FEC’s deposition of Lt. Col. Oliver North. An attorney for the FEC asks North about prayers between him and the Christian Coalition’s Pat Robertson….

FEC Attorney: (reading from a letter from Oliver North to Pat Robertson) “‘Betsy and I thank you for your kind regards and prayers.’ The next paragraph is, ‘Please give our love to Dede and I hope to see you in the near future.’ Who is Dede?”

North: “That is Mrs. Robertson.”

FEC Attorney: “What did you mean in paragraph 2, about thanking you and your wife thanking Pat Robertson for kind regards?”

North: “Last time I checked in America, prayers were still legal. I am sure that Pat had said he was praying for my family and me in some correspondence or phone call.”

FEC Attorney: “Would that be something that Pat Robertson was doing for you?”

North: “I hope a lot of people were praying for me, Holly.”

FEC Attorney: “But you knew that Pat Robertson was?”

North: “Well, apparently at that time I was reflecting something that Pat had either, as I said, had told me or conveyed to me in some fashion, and it is my habit to thank people for things like that.”

FEC Attorney: “During the time that you knew Pat Robertson, was it your impression that he had – he was praying for you?”

Attorney for North or Christian Coalition: “I object. There is no allegation that praying creates a violation of the Federal Election Campaign Act and there is no such allegation in the complaint. This is completely irrelevant and intrusive on the religious beliefs of this witness.”

Attorney for North or Christian Coalition: “It is a very strange line of questioning. You have got to be kidding, really. What are you thinking of, to ask questions like that? I mean, really. I have been to some strange depositions, but I don’t think I have ever had anybody inquire into somebody’s prayers. I think that is really just outrageous. And if you want to ask some questions regarding political activities, please do and then we can get over this very quickly. But if you want to ask abou somebody’s religious activities, that is outrageous.”

FEC Attorney: “I am allowed to make-’’

Attorney for North or Christian Coalition: “We are allowed not to answer and if you think the Commission is going to permit you to go forward with a question about somebody’s prayers, I just don’t believe that. I just don’t for a moment believe that. I ﬁnd that the most outrageous line of questioning. I am going to instruct my witness not to answer.”

FEC Attorney: “On what grounds?”

FEC Attorney: “Will you take that, at the first break, take it up- we will do whatever we have to do.”

Attorney for North or Christian Coalition: “You do whatever you think you have to do to get them to answer questions about what people are praying about.”

FEC Attorney: “I did not ask Mr. North what people were praying about I am allowed to inquire about the relationship between-’’

Attorney for North or Christian Coalition: “Absolutely, but you have asked the question repeatedly. If you move on to a question other than about prayer, be my guest.”

Attorney for North or Christian Coalition: “If that is a question, I will further object. It is an intrusion upon the religious beliefs and activities of Dr. Robertson. And how that could – how the Federal Government can be asking about an individual’s personal religious practices in the context of an alleged investigation under the Federal Election Campaign Act, I am just at a complete loss to see the relevance or potential relevance, and I consider that to be also intrusive.”

FEC Attorney: “Was Pat Robertson praying for you in 1991?”

The Christian Coalition was ultimately absolved of any FEC wrongdoing in 1999, and Lerner was promoted to acting General Counsel at the FEC in 2001 before eventually moving on to the IRS. Bopp, who’s all too familiar with the aggressive and inappropriate tenor she set leading the FEC’s Enforcement Division, says he became concerned about what would happen as soon as Lerner joined the IRS. “When she left the FEC, I thought, ‘Wow, this means the not for profit division is gearing up politically,'” he said. “It didn’t bode well, because of the way [the FEC] approached cases.”

So much for the claim that Lois Lerner is “apolitical” and “highly professional.”  She has a history of presiding over politically motivated and inappropriately invasive inquisitions against conservatives. Both at the FEC about 20 years ago and currently at the IRS, Lois Lerner has a history of presiding over government offices that overreach and abuse authority and trample the rights of conservatives.

Likewise, so much for the claim that Barack Obama is outraged and would never want government officials to target conservative groups. He’s done it before when he was a U.S. Senator and his Administration has been caught red-handed doing it again.