A first in human history: Anxious about their future on a hotter planet and angry at world leaders for failing to arrest the crisis, masses of young people poured into the streets on every continent on Friday for a day of global climate protests. Organizers estimated the turnout to be around four million in thousands of cities and towns worldwide. (Somini Sengupta, New York Times, September 20, 2019) (Below: Youth March for Climate Change (New York City, Sept.20, 2019) 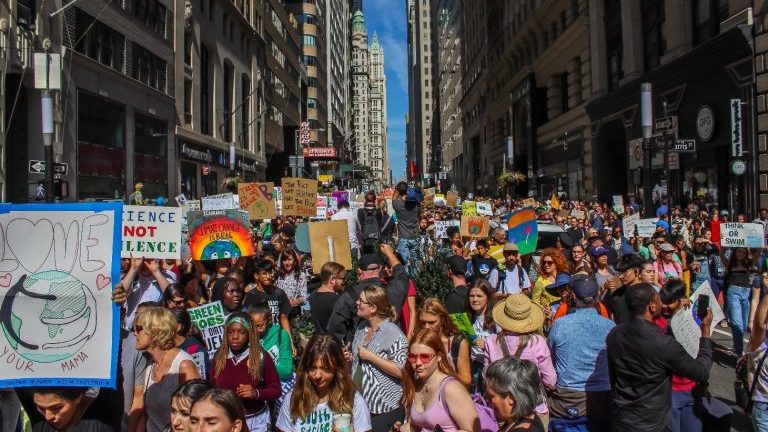 What is the motivating force which could impel  such an amazing reaction of youngsters all over the world (except China)? Clearly, the threat of extinction is taken so seriously by so many youths that they felt compelled to participate in this effort. What has convinced so many in so many places simultaneously?

Apparently, it is the vision of the planet earth being baked into destruction by the sun’s rays. This vision seems to have originated from the speculations of climate scientists as interpreted and simplified by activists. Cold, neutral, formulaic science has never elicited such emotional reactions. Those ideas had to be interpreted and simplified by propagandists. Eventually, the vision emerged with its dramatic impact and its ability to inspire visceral fear. It is this vision which has motivated a youthful passion which thirsts for a cause to believe in.

In that sense, climate change advocacy demonstrates many of the same characteristics as religion. It is an unquestioning belief in an unseen event; it inspires an ethic requiring sacrifice to achieve; and it thrives on communal events. Thus, it meets the traditional characteristics of religion: creed, code, and cult.

This phenomenon also raises the question, “Why are these folks (young and old) so open to a new religion?” Why are they not dedicated to the traditional religions of their elders? Or, more concretely, why has the Western world witnessed such a precipitous decline of traditional religious practice in recent generations?

The answer to these questions lies in the disconnect between the common life experience of our modern culture and the world view of traditional religions. As one way of approaching this topic, we might look at the differences in the epistemology (the way of understanding) between what religion teaches us compared to that of our everyday life.

Traditionally, religion proclaims that another invisible world exists in addition to this visible world. The invisible world is better than this world. This vision has brought comfort and peace to many millions of people through the ages. It has served as a reason for us to behave in certain ways which are conducive to the common good and it has given us hope to reach heaven and eternal peace when we die.

Common life experience in the 21st century exhibits a quite different vision. First of all, we live in a world of constant discovery. While many aspects of this world are invisible, such as thoughts and emotions and happiness, it is also true that our science is based on the presumption that all reality is ultimately physical, even if it is too small to be seen (atoms), too large to be understood (the universe), or discoverable only through its effect on things that can be measured (neutrons). As a culture, we have come to believe that all reality is knowable, even if we don’t yet know it. We keep learning new things all the time, only to discover more things we don’t know. Nevertheless, the thrill of learning is one of our cultural goals.

It is the task of the theologians to conceptualize and explain the spiritual dimensions of our human experience and the connections between our life experience and our traditional beliefs. It appears that today’s theologians are asleep at the switch. Our culture cries out for an ethic which takes the world we live in much more seriously than does traditional religion. To achieve that ethic, a new vision must be developed – one which understands the beauty of the universe, the world we live in, the body we have been given, and the ways in which this visible world must be treated in order for us to achieve happiness and satisfaction in our interactions with this world, our community and ourselves.

In such a vision, we see technology as an extension of our body – machines to take us farther and faster than our legs could carry us, to make our minds more agile, our imaginations more original, our views more expansive. We see our love extended to other races and places beyond our natural limits, our talents challenged by new plateaus, and our world enriched by the newness of our life on earth. This is a vision which will allow us to seek the transcendent meaning of life as the sum of all the good and evil we can see with our sharpened insights and to find our personal path to virtue, happiness and holiness.

As our lives are enriched by the colors and textures of this world which God has provided for us, we are also confronted with new responsibilities and obligations. which have been ignored in the past, to maintain that world. Some examples: while the absolute need for cheap and plentiful energy is granted, how do we justify digging coal at the risk of black lung disease for the miners? How do we justify burying nuclear waste which will take 3000 years to dissipate? How do we preserve our planet’s suitability for human life? How do we balance the harm of nuclear weapons against the cost in human life? What do we owe to trees and wildlife? And, what are the ethical norms by which we are to measure such answers?

Religion, like life itself, must evolve to meet the very real spiritual needs of real people. If organized religions fail in this fundamental obligation, people will substitute whatever they can find in order to satisfy the primal need we all share for spiritual nourishment – even if it is as flimsy as climate change.