Freedom Centers Constitutional and Political Freedom A Remarkable Confession about Government from an U ...

A Remarkable Confession about Government from an Unlikely Source 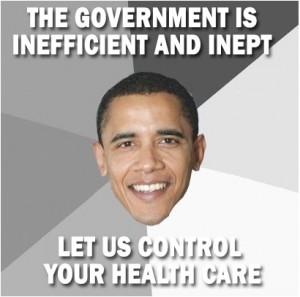 by William Bennett and Christopher Beach

The unraveling rollout of the Affordable Care Act has provided an excellent, surprising, and little noticed lesson in the failures of big government.

Although many, like George Will, Charles Krauthammer, and other commentators, have rightly pointed to President Obama’s acknowledgement in his recent MSNBC interview of the problems of “big agencies, some of which are outdated, some of which are not designed properly,” perhaps a more important and more revealing indictment of big government was an overlooked admission Mr. Obama made at his November 14 press conference to announce his insurance “fix” for the millions losing their health plans.

Attempting to explain the disastrous rollout, Obama lamented, “[H]ow we purchase technology in the federal government is cumbersome, complicated and outdated.”

He added, “If you’re doing it at the federal government level, you’re going through 40 pages of specs and this and that and the other, and there are all kinds of laws involved, and it makes it more difficult. It’s part of the reason why, chronically, federal IT programs are over budget, behind schedule.”

It may be difficult to appreciate what a remarkable, revealing, and damaging confession this is. If the federal government can’t manage an IT program on time and on budget, how will it manage the intricacies of an entire health care industry? It won’t be able to, and here is the leader of the modern liberal movement for an all-encompassing, all-caring state making it plain that it can’t.

What the President failed to mention is that the underlying reason these departments and programs are cumbersome, complicated, outdated, and you have to go through “40 pages of specs and this and that” is because of his policies and his party’s governing philosophy, not in spite of them. His party and movement write these specs and force them into policy. Now we learn from the Washington Post that the Obama administration delayed key regulations and rules before the 2012 election for political reasons, leaving businesses and consumers subject to the whims of politics.

According to the nonpartisan Congressional Research Service, from 2009 through 2012, more than 13,000 final rules were published in the Federal Register, an increase of five percent from 2005 to 2008. And of those rules, more “major rules,” rules with an economic impact valued above $100 million, were enacted in 2010 than in any year since 1997. Additionally, the Obama administration took longer to approve regulations in 2012 than any other year going back to 1994.

The Affordable Care Act alone contains thousands of pages of regulations and red tape. Sen. Mitch McConnell calculates the law created 159 new government agencies, boards, and programs to enforce roughly 20,000 pages of rules and regulations. The great irony is that the President’s own policies have contributed to his policy’s undoing.

The litany of problems with the health care law rollout explain better than any conservative commentator could why the larger and more intrusive the government becomes, and it will grow dramatically larger and more intrusive with Obamacare, the slower and more cumbersome the government becomes. Anyone who has gone to the Post Office or DMV knows government agencies possess the agility of an aircraft carrier. Special interests, regulations, and politics often take precedent over efficiency, productivity, and profit.

After he retired from politics, George McGovern, former Democrat Congressman, Senator, and presidential nominee in 1972, purchased the leasehold of Connecticut’s Stratford Inn. The politician turned businessman quickly discovered how difficult government had made running a business. In a 1992 column for The Wall Street Journal, McGovern confessed, “In retrospect, I wish I had known more about the hazards and difficulties of such a business… I also wish that during the years I was in public office, I had had this firsthand experience about the difficulties business people face every day. That knowledge would have made me a better U.S. senator and a more understanding presidential contender.”

Between the President’s comments and the disastrous rollout, perhaps the veil has been lifted on the flaws of one-size-fits-all, big government solutions. After all, when the Obama administration announced its tech surge to repair Healthcare.gov, to whom did they turn for help? The private sector, of course.

Not surprisingly, it seems that the private sector has already made quite the impression on the government bureaucrats. In a comical indictment of its own existence, the Department of Health and Human Services reported at the beginning of December that its own tech team was “operating with private sector velocity and effectiveness.”

In the words of Frédéric Bastiat, government bureaucrats are themselves proving why they are not “made of a finer clay than the rest of mankind” and that the private sector can more effectively and deftly manage the health care industry.

President Obama himself has been the most eloquent spokesman against big government. At the same press conference in November, Pres. Obama admitted, “[W]hat we’re also discovering is that insurance is complicated to buy.” If only this education didn’t have to come at such a great cost, from millions of Americans losing their health coverage to hundreds of millions of taxpayer dollars wasted on Healthcare.gov.

Mr. Bennett, a former secretary of education, is a fellow of the Claremont Institute, and host of the nationally syndicated radio show, “Morning in America.” Mr. Beach is the show’s executive producer. This article was written originally for Forbes.