A Republican Plan for Healthcare Reform 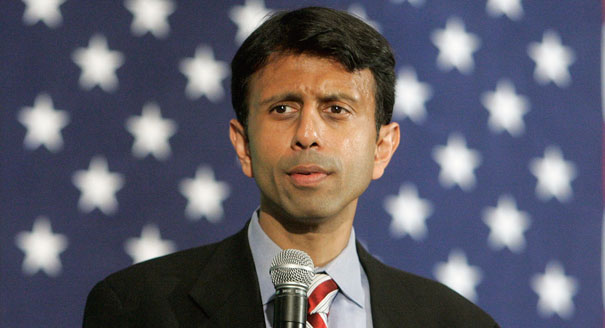 President Obama has repeated claimed that the Republicans have only voted to repeal ObamaCare, but have no ideas or proposals of their own. This was, and is, entirely false – just like when Obama said, “If you like your health plan, you can keep your health plan.”  You may ask why does he so consistently say demonstrably false things? Because the media won’t hold him accountable.  He does it because he can. Here’s just one of the many Republican plans for healthcare reform.

Louisiana Gov. Bobby Jindal came to Washington on Wednesday with a message to those arguing that conservatives would have to operate within the policy framework created by President Obama’s health care law: “I absolutely do not think we can give up the fight to repeal Obamacare.”

The potential 2016 Republican presidential candidate was in town to promote a new health care plan developed by his America Next policy group that would not only repeal Obamacare in its entirety, but also make sweeping changes to the system that existed prior to the law’s implementation.

Under Jindal’s proposal, Obamacare would be replaced with a system that equalizes the tax treatment of health insurance. Instead of merely giving tax advantages to those who obtain insurance through their employers, the Jindal plan would create a standard deduction for health insurance for all taxpayers.

His plan also allocates $100 billion over a decade for grants to states if they agree to set up a program to guarantee coverage for those with pre-existing conditions and drive down premiums. Additionally, the plan would return some money to states known as Disproportionate Share Hospital Payments — which were slashed as part of Obamacare — and states would have to direct the funding toward expanding health insurance. He said there would be more than enough money to finance the grants out of the savings generated by other elements of his plan.

In a discussion with right-leaning health care scholars and journalists, Jindal criticized the narrative being written about the White House announcement that 7.1 million people had signed up for coverage through the health care law.

“I think it’s a mistake if we measure health care reform in terms of how many people we give cards to,” Jindal said. He noted a landmark study from Oregon that found that Medicaid made no measurable difference in physical health outcomes.

“We need to focus on real health care reform that empowers the consumer, that doesn’t grow government, that puts patients back in charge and allows people to continue to get access to high quality care,” he argued. “I think the president made a mistake when he veered off his focus on costs and I think we can reclaim the debate, re-center the debate, re-focus the debate on providing access to high quality care, driving down the cost of health care.”

Though many elements of the plan are ones that conservatives have advocated in the past, the question now facing Republicans is whether the implementation of the health care law – specifically the fact that there are now millions more people receiving government-subsidized insurance and Medicaid – changed the policy calculus.

“I absolutely do not think we can give up the fight to repeal Obamacare,” he said when I pressed him on that point. “That’s the attack from the Left obviously, that once you’ve given stuff to folks, once you’ve expanded a program, you can’t cut it back. If as conservatives we concede that, we’re done. We’re done as a country and we’re done as a conservative movement.”

He rejected the idea that the law would become intractable the longer it was in place and signed up new beneficiaries.

As examples, he noted people losing their plans and access to the doctors and the Congressional Budget Office finding that it would create incentives for people to leave the workforce.

“I’d also say that we’ve got to build the case for repeal and replace,” he explained. “And part of doing that is winning the debate. Winning the war of ideas and showing there is a real alternative. The president likes to go around saying, ‘There’s no other way to cover people with this condition or that.’ And that’s just not true. I think we can show that person with pre-existing conditions with these reforms, you do have access to an affordable health care plan. And I do think that this is still a center-right country, and if we don’t believe that, I think we’ve got bigger problems.”

Jindal emphasized that Obama was willing to pay a political price to pass his health care law, and therefore Republicans should also be willing to take a bold stand in favor of a market-based approach.

“I think if you went back in time and found then-Senator Obama and said, ‘You’re going to be elected president. If you do Obamacare, you’re going to lose the House, lose the ability to do anything else, or get any of your other big domestic policies through Congress,’ I think he’d still do it.”

Jindal explained, “For them, they understand, this is a once-in-a-generational opportunity to grow the size of government and encroach on our liberties. And so I think that it’s that important and it’s that much worth fighting for to repeal it and replace it. But I think the way you get a majority of the American people convinced is to win that debate of ideas. It’s to be specific and to be willing to look at people and say, ‘We’re going to do this and we’re not going to do that.’ And not everybody is going to agree with it. And that’s okay.”

He went on to say that, “I think there are some smart political folks in this town who think the best course is just to be against Obamacare until November and don’t propose anything specific. And I think that’s a mistake. I think we need to have the courage of our convictions. We as conservatives like to say this is a critical time for the country. If we really believe that, we need to be able to, No. 1, be willing to persuade people and then secondly, go say why and what would we do differently to build that mandate.”

Later on in the conversation, Jindal said, “I do think it’s a mistake if we say that we can’t take back what Obama’s already given.”

Jindal was pressed on why he chose to offer a tax deduction for individuals to purchase insurance rather than a refundable tax credit. Supporters of the tax credit approach argue that it would benefit more people, because lower-income Americans don’t pay enough taxes for the deduction to be valuable enough to make insurance premiums affordable.

He said that he decided on the deduction approach because relying on tax credits would be so costly that it would require tax increases – and Jindal doesn’t want his plan to spend more or tax more than the system that existed prior to Obamacare’s passage. He also argued that credits would cause more disruption to the employer-based market and would be more prone to fraud.

Jindal cited previous estimates of similar reform proposals to his own, which he said could reduce family health insurance premiums by $5,000 annually and increase coverage by 9 million people relative to the number of people who were covered prior to Obamacare.

“I don’t think conservative health care reform is about saying we’re going to compete with them in terms of how many people we say have an insurance card,” he said. “That’s not the ultimate goal.”

In addition to changing the tax treatment of health insurance and offering grants to states, Jindal’s health care plan would include a series of additional reforms, such as ideas to expand health savings accounts by allowing individuals to use funds to pay premiums; allowing interstate purchasing of insurance; creating incentives for individuals to engage in more healthy behaviors; reforming the medical malpractice system; transitioning Medicare to a system in which individuals can choose among government-subsidized insurance policies; and moving Medicaid into a system in which states are given grants and provided more flexibility to implement the program.

Philip Klein is a Senior Writer at The Washington Examiner.