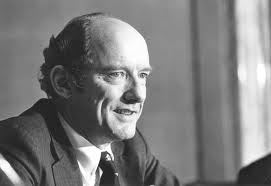 Malcolm Wallop is a descendent of a pioneer family from Big Horn, Wyoming and is the proud father of four children.

Both in and out of public office, Senator Wallop has been an outspoken conservative commentator and activist, working on such issues as tax reform, federal deregulation, energy policy, private property rights, and national defense. In 1978, Senator Wallop was the first elected official to propose a space based missile defense system, a program that later became part of the Strategic Defense Initiative.

Elected to the Senate in 1976, Senator Wallop held his seat for eighteen years, retiring in 1994. During his tenure, Senator Wallop served on numerous committees, including Energy and Natural Resources, Finance, Small Business, Armed Services and the Select Committee on Intelligence. He was also the first non-lawyer in U.S. Senate history to serve on the Judiciary Committee. As the ranking Republican member of the Energy and Natural Resources Committee from 1990 to 1994, Senator Wallop was an outspoken advocate of the multiple economic uses of federal lands and development of domestic energy supplies of coal, oil and natural gas.

Senator Wallop has a long and distinguished record of legislative achievements to mark his three terms in Congress. In 1981, Congress enacted his legislation to cut inheritance and gift taxes, an effort hailed as one of the major legislative achievements of the decade in tax reform. He has long been regarded as one of the foremost authorities on Western water law, and demonstrated his early commitment to halting federal encroachment into state affairs by successfully pushing for adoption of the so-called “Wallop amendment” to the 1980 Clean Water Act, barring federal usurpation of state control of water. He authored the Sunset of the Carter Era Windfall Profits Tax, the first sunsetted tax in history. He recognized early on the need to prevent Federal ‘taking’ of private property by sponsoring the 1977 Wallop Amendment to the Surface Mining Control Act. This directed the Federal Government to compensate, through purchase or exchange, owners of mineral rights whose right to mine had been denied by federal regulation of Alluvial Valley Floors.

For 16 of his 18 years in the Senate, Senator Wallop served on the Senate Finance Committee. There his major work was in energy taxes and incentives and international trade. He made several trips to Geneva for the General Agreement on Tariff and Trade (GATT) talks and later on the WTO. He also traveled to Britain, France, Belgium and Germany on trade related missions. In the Pacific Rim, he had sessions of both a private and public nature to Japan, Korea, Taiwan, and Hong Kong. He represented the American trona industry in both Europe and the Pacific. Known as a staunch free trade proponent, his trips were generally structured to meet industrial, financial, and government interests on issues of tariff barrier reductions.

One of the most important achievements of the Senator’s career was passage of his Energy Policy Act of 1992. This sweeping legislative initiative set forth an energy conservation and production strategy that not only furthers our national security interests, but has helped create jobs and lessened our dependence on foreign energy markets. It restructured the whole permitting process for nuclear power plants making it both more economically and environmentally sound.

Throughout the eighties Senator Wallop served on both the Senate Arms Control Observer group and the Committee on Security and Cooperation in Europe — also known as the Helsinki Commission. His extensive travel for these responsibilities took him to the Soviet Union, Eastern and Western Europe. The issues of arms control in SALT II, INF, START I and START II were among the most complex international relations issues of the era. The human rights issues and western pressure surrounding them led ultimately to the liberation of the Baltics and Eastern Europe and finally to the CSCE treaty.

More recently, Senator Wallop led the congressional charge against the “War on the West”, the Clinton Administration’s effort to “colonize” western states through increased federal regulations and encroachment on states’ rights. Wallop was successful in beating back the Administration’s assault on Western mining, grazing, and water rights, viewing the attack as a harbinger of broader efforts by the federal government to limit economic development and the rights of states and individuals.

Senator Wallop has long been a vehement opponent of unfunded mandates and established his own “Red Tape Award” in 1993, a less than coveted honor which exposed abusive federal regulators awarding their bureaucracies with a Statue of Liberty bound head to toe in red tape.

The Senator is the author of the 1984 Wallop-Breaux Sport Fishing Restoration Act, a program that raises revenue for boating safety and fish habitat conservation through user fees collected on motor boat fuel and fishing tackle. Wallop-Breaux is unique not only because it is a user fee which directly benefits those who pay it, but also because the role of the federal government in the program is minimal. In 1994 Wallop-Breaux generated over $170 million to state fish and game agencies.

An early supporter of volunteerism, Senator Wallop’s legislation establishing the Congressional Award program was approved by Congress in 1979. The Congressional Award honors the nation’s youth for community service and personal achievements. It is privately funded and is the only award given in the name of Congress.

A staunch advocate of a strong defense, Senator Wallop is considered one of the nation’s most knowledgeable experts on defense policy. He and Dr. Angelo Codevilla co-authored The Arms Control Delusion, a provocative critique of the arms control process which argued that arms agreements with the former Soviet Union only served to undermine America’s military strength while reinforcing Soviet Strategic capacity. Senator Wallop has written numerous articles on defense and foreign policy. In addition to addressing the Oxford Union, he has lectured extensively at a number of America’s most distinguished defense universities and academic institutions as well as in England, Belgium and France. He is currently a Senior Fellow with the Heritage Foundation where he writes and speaks on issues of foreign policy and national defense.

The Senator has also written for a number of distinguished publications, including the Strategic Review, National Review, the Notre Dame Law School Journal, the Detroit College Law Review, Policy Review, Orbis, National Interest, the American Spectator and Insight along with editorials for the Wall Street Journal, Washington Times, Washington Post, USA Today and New York Times, among others. He has appeared on such TV programs as FoxNEWS’ The O’Reilly Factor, Nightline, the Today Show, CBS Morning News, and McNeil-Lehrer. His radio appearances include G. Gordon Liddy, Armstrong Williams, Larry King and Jim Bohanan. and Michael Reagan.

He is the recipient of a legion of honors, among them the American Conservative Union’s John Ashbrook Award and Ronald Reagan Award, the National Energy Resources Organization’s National Leadership Award, the Center for Security Policy’s “Keeper of the Flame Award,” the Congressional Award’s Leadership Award, and the Fund for American Studies’ Congressional Scholarship Award, and Citizens for a Sound Economy’s Jefferson Award, along with consistently being honored throughout his congressional career with such annual honors as NFIB’s Guardian of Small Business, the National Taxpayer Union’s Taxpayers’ Friend Award and Watchdog of the Treasury, Inc.’s Golden Bulldog Award. He has also received the highest award of the American League of Anglers and Boaters for his work establishing the Wallop-Breaux Sport Fishing fund and the National Cattlemen’s Association and Public Lands Council for his work to protect the West from federal intrusion.

The Senator, who has built a reputation as a tireless promoter of individual freedom and small government, now chairs Frontiers of Freedom, a non-profit organization he established in January of 1995 immediately after retiring from the Senate. In its first year, Frontiers of Freedom established itself as a public policy organization with an edge. Its agenda includes preservation of property rights and reform of the Endangered Species Act, the privatization of Social Security, protection of civil liberties and the defeat of such big government initiatives as the antiterrorism bill and the national ID card legislation, and reform of the Food and Drug Administration. In 1995, he established Frontiers of Freedom designed to study and research issues pertaining to limited government and Constitutional freedoms.

In February of 1996, Steve Forbes asked Senator Wallop to be the General Chairman and Executive Director of his presidential bid. The immediate affect of his arrival led to specific changes in strategy and tactics which, in turn, led to primary victories in both Delaware and Arizona.

Graduating from Yale University in 1954 with a Bachelor of Arts degree, Senator Wallop served in the US Army as a First Lieutenant from 1955 to 1957 and was a member of the Wyoming Legislature from 1969 to 1976. His extensive business career includes management of the Wyoming ranch holdings he owns and establishment of a feedlot. He jointly ventured oil and gas development projects in Nebraska, Montana and Wyoming. Senator Wallop was an active real estate developer and investor. He retired to be a Wyoming rancher, businessman, and international consultant.