Freedom Centers Constitutional and Political Freedom Affordable Care Act Hurts Twice As Many As It Help ...

Affordable Care Act Hurts Twice As Many As It Helps 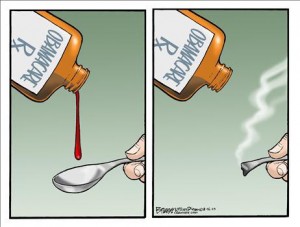 In 2014, 25 million to 30 million Americans who have employer-provided health insurance are likely to lose it, thanks to ObamaCare’s requirement that all plans cover what Washington deems “essential benefits.”

Some employers will consider that unaffordable and drop coverage altogether, when their current, less-expensive plans expire over the course of the year. These 25 million to 30 million are in addition to 6 million who bought plans in the individual market and had them canceled by Jan. 1.

The plight of those 6 million made headline news and caused the first cracks in the Democratic Party’s support for the law. The bigger wave of workplace cancellations will force Democrats seeking re-election this fall to defend a law that harms twice as many people as it helps.

That’s right: At least twice as many will lose coverage in 2014 as will gain it.

The Congressional Budget Office projects 16 million will gain coverage through the law’s Medicaid expansion and subsidized exchange plans. That’s a best-case scenario, rosier than the enrollment figures we’ve seen so far, but still half the number losing coverage.

There were warnings of this workplace disaster. In 2011, McKinsey & Co., management consultants, cautioned that nearly one-third of employers surveyed were considering dropping coverage in response to the law.

Employers who self-insure are not affected by the “essential benefits” requirement, but employers who purchase coverage in the small group market (for about 60 million people altogether) get clobbered.

The one-size-fits-all requirement adds a whopping $1.79 an hour to the cost of a 40-hour employee, and more than $2 an hour in New York and New Jersey, where health plans are more expensive, according to economist James Sherk of the Heritage Foundation.

It’s one thing if you’re paying lawyers and accountants, but unaffordable for waiters and receptionists.

Michael Kennedy, who runs two dog-grooming salons near Albany, N.Y., said the requirement doubles his insurance cost per employee, eating away at his small profit.

The 31.5 million people most at risk of losing their on-the-job coverage currently get it from employers with fewer than 50 employees. These employers are free to drop coverage, and many will.

Employers with 50 or more full-time workers may be in a different spot, because the Affordable Care Act mandates they provide coverage. The law says the mandate “shall” take effect on Jan. 1, 2014. The president delayed it (without legal authority) until Jan. 1, 2015, and it’s likely never to happen. Nevertheless, employers will prepare in case it does.

An astounding 77% of hires in the first seven months of 2013 were part-time, until the president delayed the mandate. The possibility of the mandate is likely to cause a repeat of last year’s problem.

If it goes into effect, employers with more than 50 employees will either have to provide the “essential benefits” and pay fees levied on covered employees by ObamaCare and cope with reporting requirements or drop coverage and pay a $2,000 penalty per employee, which adds 98 cents an hour to the cost of a worker, instead of $1.79 or more. Dropping is a better deal.

It’s not a bargain, however, for most employees losing coverage. Workers with on-the-job coverage contribute $999 a year in pre-tax dollars and have a deductible of $1,135 on average for individual coverage, according to the Kaiser Family Foundation.

On ObamaCare exchanges, all but the lowest earners will pay more (even after subsidies), pay with after-tax dollars, face deductibles of $3,000 to $5,000 for silver and bronze plans, and lose access to many doctors and hospitals.

Finally, add to those losing coverage the 3.1 million workers in low-margin industries who had mini-med plans. ObamaCare barred these plans in 2010, but the administration handed out waivers to postpone the fallout. Those waivers expired Jan. 1.

All in all, the toll of those losing coverage in 2014 probably will reach 30 million. And most will find ObamaCare an unaffordable and low-quality alternative.

Betsy McCaughey, Ph.D., is a well-known political commentator, constitutional expert and regular guest on CNBC and many national radio programs.  Her column was published in the Investors Business Daily.