Afghanistan Now the Pentagon’s No. 1 Priority in the Middle East, South Asia 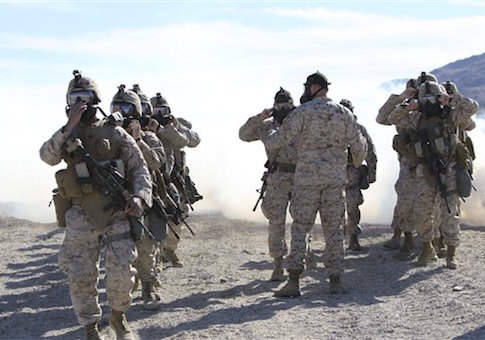 The U.S. military has begun redirecting personnel and equipment from Iraq and Syria back to Afghanistan, where the Pentagon hopes to revamp its fight against the Taliban, the top commander of the American-led air campaign in the country said Wednesday.

Air Force Maj. Gen. James Hecker said the drawdown of major operations against the Islamic State in Iraq and Syria has enabled U.S. Central Command, or CENTCOM, to again prioritize the 16-year war in Afghanistan. CENTCOM is the military command responsible for operations in the Middle East and parts of South Asia.

“Afghanistan has become CENTCOM’s main effort thanks to the recent successes in Iraq and Syria,” Hecker told Pentagon reporters from Kabul. “This has allowed CENTCOM to shift more assets our way, which will significantly improve our ability to assist the Afghans.”

The Pentagon’s refocus officially began on Feb. 1. Hecker said CENTCOM began deploying additional aircraft to the NATO-led Resolute Support coalition two weeks ago, which included a squadron of A-10 attack planes and a 50 percent increase to its cache of armed surveillance drones.

Hecker said the “weight and effort” of the U.S. intelligence community will be shifted to Afghanistan within the next month. The Pentagon is also preparing to deploy up to 1,000 additional military advisers to the country before the start of the Taliban’s spring fighting season.

The U.S. military has significantly ramped up air operations against insurgent targets near the borders of China and Tajikistan. Beginning Feb. 2, American B-52 bombers dropped a record-setting 24 precision-guided munitions against Taliban-affiliated training and narcotics facilities in the northeastern Afghan province of Badakhshan. Video released by the Pentagon on Wednesday showed three separate Taliban facilities being decimated to ashes.

Hecker said the annihilation of these training facilities prevents insurgents from planning terrorist attacks near Afghanistan’s border with China and Tajikistan. He said the coalition strikes also destroyed stolen Afghan military vehicles that were being converted into vehicle-borne improvised explosive devices.

“With the current uplift in resources, we can decimate Taliban command and control nodes,” Hecker said. “That means we can strike at the heart of training camps, where they brainwash young men to strap on a suicide vest to kill themselves and their fellow Afghans who are working to rebuild the country.”