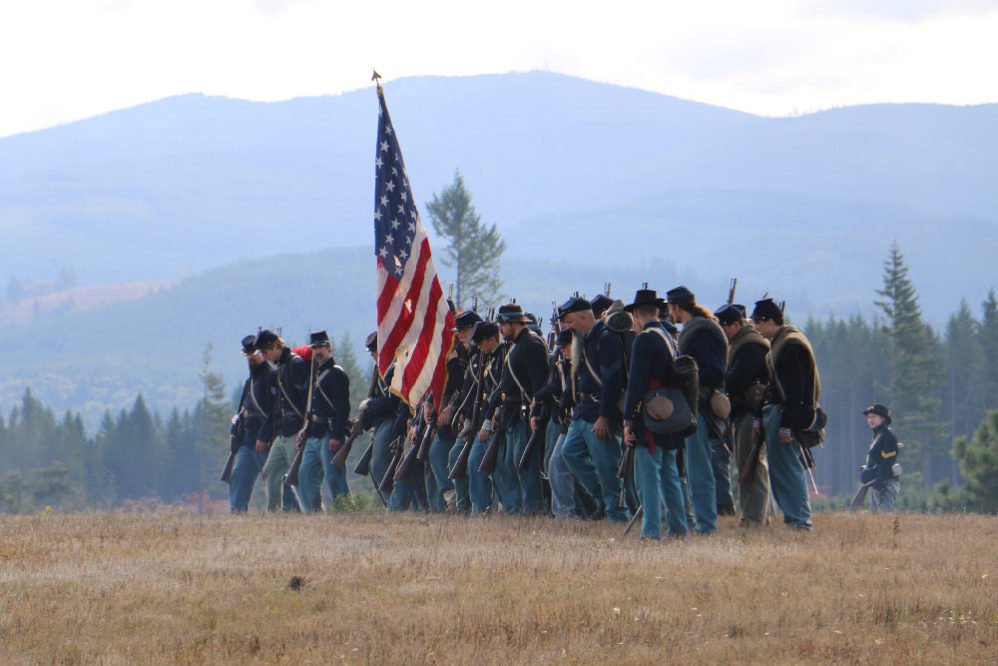 By  John Daniel Davidson • the Federalist

Americans are losing interest in the Civil War—or at least they are losing interest in learning about it and visiting historic battle sites. The Wall Street Journal reported recently that the country’s “five major Civil War battlefield parks—Gettysburg, Antietam, Shiloh, Chickamauga/Chattanooga, and Vicksburg—had a combined 3.1 million visitors in 2018, down from about 10.2 million in 1970.” Gettysburg, America’s most famous and hallowed battlefield, drew fewer than a million visitors last year, and just 14 percent of the visitor total in 1970.

In addition to fewer tourists, the number of Civil War re-enactors is also declining. Many are growing old, and younger men are not stepping in to replenish their ranks. As one 68-year-old re-enactor, who recently helped organize a recreation of the Battle of Resaca in Georgia, told the Journal, “The younger generations are not taught to respect history, and they lose interest in it.”

But it’s not just that young people are not taught to respect history. They are often not taught history at all. To the extent they are, they are told that American history is a parade of horribles: slavery, genocide, bigotry, greed—a story above all of injustice and oppression, perpetrated by the powerful against the weak.

No wonder then, that recent public interest in the Civil War has mostly taken the form of a push to remove Confederate monuments from public places and rename buildings and roads bearing the names of Confederate leaders. We hear much about removing and renaming these days, but almost nothing about building more and better monuments, or reinvigorating public interest and education about the war.

In a country where large numbers of college graduates do not even know the half-century in which the Civil War occurred, but are convinced that Confederate monuments should come down, we should expect genuine interest in the Civil War to wane if not to disappear entirely, except perhaps as an object for political activism.

The Politicization of History Invites Ignorance

This problem of course goes well beyond the Civil War; it encompasses all of history. Consider the case of the College Board’s Advanced Placement U.S. History examination. In 2014, the National Association of Scholars issued a report exposing the exam’s heavy progressive bias, systematic downplaying of American virtues, and outright omission of important periods in American history. The report sparked enough outrage and bad press that the College Board revised its exam—this time including previously omitted figures like James Madison—but according to the NAS the course materials for the test were unchanged and reflected the same progressive bias.

In 2016, the NAS decided to take a closer lookat another of the College Board’s offerings, the new AP European History examination, which, it turns out, reflected the same progressive bias as the American history exam. “The College Board’s persisting progressive distortion of history substantiates concerns that the 2015 APUSH revisions do not represent a genuine change of direction,” wrote the NAS’s David Randall, “but only a temporary detour in the College Board’s long march to impose leftist history on the half a million American high school students each year who prepare themselves for college by taking APUSH or APEH.”

(The exam, which purports to be about European history, omits all mention of Christopher Columbus, Michel de Montaigne, John Wesley, the Duke of Wellington, Florence Nightingale, and Václav Havel. It mentions Winston Churchill only “as a prompt for learning how to analyze primary sources.”)

Progressive bias in high school and college curricula is in part the long legacy of Howard Zinn, whose “A People’s History of the United States,” first published in 1980, presents a cartoonish, left-wing version of American history that pits “the people” against “the rulers” and casts the entire American experiment of democratic self-rule in a decidedly negative light. That approach is now common among professional historians, with the result that growing numbers of Americans don’t know much, or care to know much, about their own history.

As the historian Wilfred McClay said in a recent interview, the Zinn approach invites historical ignorance and indifference: “Why learn what the Wilmot Proviso was, or what exactly went into the Compromise of 1850, when you could just say we had this original sin of slavery?”

The danger here is not just that Civil War battlefields will eventually lie fallow for lack of visitors, but that we will unlearn the painful lessons of our past. To some extent, we’ve already started down that path.

Another recent NAS report, for example, examined the re-emergence of segregation on college campuses—what the authors call “neo-segregation.” In a survey of 173 schools, including small private colleges as well as major universities like the Massachusetts Institute of Technology and Yale University, the study found“42 percent offer segregated residences, 46 percent offer segregated orientation programs, and 72 percent host segregated graduation ceremonies.”

These segregated graduation ceremonies are not mandatory, of course, and are offered in addition to regular graduation ceremonies. But the fact that they have become so prevalent on college campuses should disturb anyone familiar with the history of segregation in America. Whether it’s segregation by race, as at Columbia University’s “Raza Graduation Ceremony” and “Black Graduation,” or by sexual orientation, as at the University of Texas’s “Lavender graduation” for LGBT students, the trend of self-segregation among minority college students is a cause for worry, especially at a time when divisions in civil society are deepening.