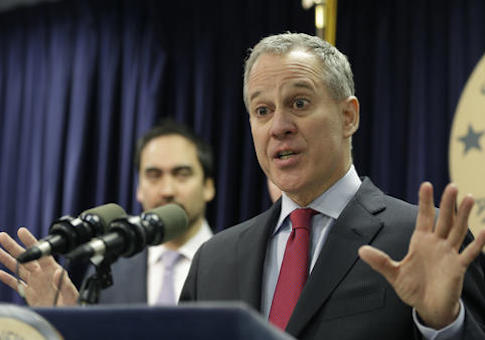 The office of attorney general is a role that is unrivaled in government. Its occupant possesses the power to prosecute private citizens, corporations and even governments on the public’s behalf.

It is the reason that most fair-minded attorneys general maintain a semblance of nonpartisanship, generally picking cases that serve the broadest public interest instead of giving in to the quick and easy returns that come with pursuing flashy lawsuits, pandering to powerful voting blocs or chasing big paydays.

All this has changed thanks to the pioneering efforts of a Washington, D.C.-based law firm, Cohen Milstein, and firms like it, which have been aggressively courting a pool of potential new clients among the nation’s attorneys general. Critics of the practice call this a troubling trend often encouraging the pursuit of potentially lucrative but legally dicey cases they might not otherwise touch.

By most accounts the firm’s pitch is hard to resist, especially for attorneys general in cash-strapped states. Cohen and Milstein offers to litigate big cases on the basis of contingency fees, allowing states to take the cases on with little financial risk.

It is a striking departure from the traditional prospecting of trial attorneys, who typically finds clients among legions of injured workers, victims of medical malpractice and the like. For Cohen Milstein, the partnership provides an extraordinary level of firepower: the state uses its police powers to compel legal targets to turn over information under subpoena, while Cohen Milstein does all the work.

The problem, of course, is simple: By pitching legal work, Cohen Milstein is fundamentally changing the role of the attorneys general, picking cases based on greed rather than public good, and it seems potentially creating a conflict of interest for the state. The firm seeks out new clients and opening news avenues of litigation in ways that some experts say opens the door to potentially needless, biased, costly litigation.

In a short amount of time states have seen those concerns actualized into full fledge problems and backlash against the financial opportunism of Cohen Milstein.

In Nevada in 2014, the firm spearheaded a case against mortgage lender Lender Processing Services, alleging that the company violated consumer-protection laws. The company had already settled claims in 49 other states when it faced these accusations but was unable to reach an agreement in Nevada, drawing into question the financial incentive for Cohen Milstein to refuse a settlement for financial incentive.

Cases like this have become alarmingly frequent, so much so, judicial concerns are increasing over the legality of working with firms like Cohen Milstein. Just last March, a Superior Court Judge in New Hampshire ruled the New Hampshire Attorney General’s agreement with Cohen Milstein was unconstitutional.

Nevertheless it’s an arrangement being replicated elsewhere, and quickly. State attorneys general are outsourcing legal work to private firms on a contingency fee basis, allegedly on behalf of state taxpayers. It’s not limited to state government either. The IRS is now outsourcing the legal work involved in complicated corporate audits to private firms on retainer for big bucks.

Walker’s subpoenas have been withdrawn but a question remains: How does the U.S. Virgin Islands, which has a government budget of about $1 billion a year, decide to take on the world’s biggest energy company? Why, the answer, of course, is outside help.

Claude Walker relied on Cohen and Milstein so thoroughly throughout the failed legal initiative that he directed all relevant subpoena materials to be sent not to his office but to Cohen Milstein’s. And, though these subpoenas have been withdrawn, it’s been revealed that Cohen Milstein could take home as much as 27 percent of any monetary damages that might have been won in the legal case.

That’s an enormous chunk of change to just walk away from, leaving one to wonder whether Cohen Milstein will push Walker to reopen the case or send their pitch out to other attorneys general across the country in hopes of finding the firm’s next big payday.

As it turns out legal entities like Cohen Milstein are protected under a newly revealed Common Interest Agreement between state attorneys general who are pursuing legal cases on climate change and the Clean Power Plan apparently organized, according to published reports, by New York State Attorney General Eric Schneiderman. An indication of the growing alliance between state attorneys general and private legal entities, which the U.S. Chamber of Commerce’s Institute for Legal Reform foresaw as a growing problem nearly two years ago.

With new revelations and more legal attacks sure to come, the only thing for certain is the principal interest behind Cohen Milstein lead cases are certainly not the state or the public’s best interest, which should be the very intention of the office of attorney general.