Beware the Scent of Musk 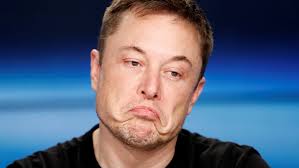 Everyone’s still talking about the dramatic tumble in the price of Facebook stock which, if the estimates are reliable, had left its founder – Mark Zuckerberg – more than $10 billion poorer than he was at the start of the month.

It’s a big loss to be sure, but not as potentially significant as the one experienced at Tesla, the electric car company founded by Elon Musk. The price Tesla stock has dropped over 21 percent since the middle of June, and could spend the rest of the summer on a roller coaster ride that leaves investors dizzy.

It not only investors who should be cautious. The U.S. government has partnered, may partner, or is thinking about partnering with Musk on projects financed by tax breaks and tax dollars. That translates to our money, and we’re right to expect Uncle Sam to take good care of it.

Investors were supposed to cheer when Tesla finally met its 5,000 vehicles per month production target, which should mean the company is finally on its way to sustainable profitability. But the company, which has something of a checkered history when it comes to vehicle safety, was only able to meet its mark by suspending a critical safety test.

Some would say this kind of sloppy management is a Musk trademark. Maybe. He’s certainly come in for considerable criticism about his cars, his work in the commercial space exploration sector, and some of his other projects. True, he’s the type of visionary where criticism is all too common, especially from doubters who don’t believe and rent-seekers who like things just the way they are. But, as they say, where’s there’s smoke, there’s quite often fire.

According to the U.S. Department of Defense, Space-X – Musk’s government-backed rocket company – also has quality assurance management issues. A NASA independent review team found this year that one of his rockets contracted by the government exploded because a lower grade strut “without adequate screening or testing” had been used “without regard to the manufacturer’s recommendations for a 4:1 factory of safety.”

Under current conditions, detail-oriented tasks like ensuring safety and reliability do not appear to be given the attention they should. And rather than address these concerns head-on, he engages in flights of technological fancy by directing his engineers to design and build a submarine to save a dozen children trapped in a flooded cave in Thailand. Vern Unsworth, a British diver who played an essential part in the successful effort to rescue them, called Musk’s submarine a “PR stunt” and said it “wouldn’t have made it to the first 50 meters.”

For this, Musk whined, giving credence to the charge made by his critics he cares more about sizzle than substance. When his ideas to colonize Mars or build highways under Los Angeles are not at the top of the news cycle, he will seemingly do whatever it takes – even if it means over-extending himself – to get his name back in the headlines.

Analyzing Musk’s recent Twitter tirade, Vertical Group Managing Director Gordon Johnson told the Washington Post “this thing is unraveling,” citing how a very large shareholder implored Musk to “focus on executing and stop with the tweets.” In his own words, “He keeps promising all of these things, and he keeps missing, and he’s not being held to task.” For these reasons and more, Tesla may now be one of the most shorted stocks on Wall Street.

The private sector is taking this into account, which is why the price of Tesla stock is dropping. His public-sector benefactors, who’ve given him a slew of federal and state building incentives and a $130 million contract recently awarded from the Air Force, show no sign of stopping.

It is unlikely that Musk will ever be able to rectify the Department of Defense’s and other government agencies’ security concerns – on sending astronauts into space, producing self-driving cars, and sufficiently training employees – when he spends his days building submarines, selling flamethrowers, and arguing on social media.

Being the center of attention all the time has its costs, both for taxpayers and national security. The sooner government procurement leaders accept this reality, the better.