Biden Is Clueless About Inflation

The president's $5.8 trillion budget shows he wants more of the same government spending that is already sending prices through the roof. 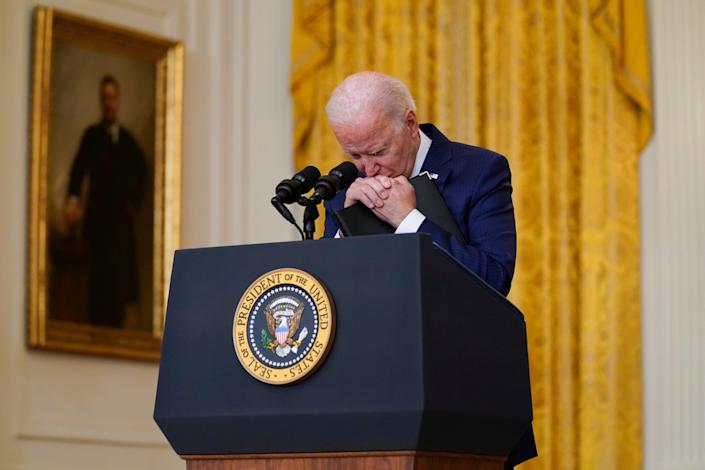 “My dad had an expression,” said President Joe Biden as he announced his budget plan for FY 2023. “Don’t tell me what you value, show me your budget, and I’ll tell you what you value.”

So at the very moment that we’re experiencing the highest inflation in 40 years, what does Biden value? The same sort of government spending that is already sending prices through the roof.

You’d figure that with Covid receding, debt rising, and a tidal wave of unfunded liabilities staring us right in the kisser, Biden would take the opportunity to radically reset the federal government’s balance sheet. Instead, his budget plan could be titled Rearranging Deck Chairs on the Titanic.

The president wants to spend $5.8 trillion, which would include jacking spending on defense, education, and police. He talks about levying a controversial—and probably unconstitutional—wealth tax on billionaires to help pay for it all but still expects a budget deficit of $1.2 trillion (see Table S1 in Summary Tables)! If you’re going to tax unrealized capital gains, President Biden, at least spend it on something pretty!

It’s debt-financed spending that helps spur inflation in the first place. Rather than cutting spending and reforming entitlements, the government borrows and prints money so it can keep giving more goodies to its favored citizens. You get more dollars chasing the same amount of goods, and that leads to price hikes.

Meanwhile, at least a dozen states—including such far-flung places as California, Georgia, Hawaii, and Maine—are thinking about giving residents money to spend on things like gas, the price of which has gone through the roof. “Direct relief will address the issue that we all are struggling to address,” says California Gov. Gavin Newsom. “That’s the issue of gas prices, not only here in our state, but of course, all across this country.”

Is he serious? Doling out tax dollars to alleviate the pain of inflation is like drinking a beer in the morning to ease your hangover. It’s only setting up the next binge.

Federal Reserve Chairman Jerome Powell has announced a series of interest rate hikes to help tame inflation, but in a recent speech, he made no mention of the increase in the money supply measured by M2, which has risen by a record 41 percent in two years, or of the Federal Reserve’s holding of U.S. debt, which has jumped $3.5 trillion over the same time period.

Powell’s interest rate hikes will be small enough that it’s unclear whether they will have much impact. Back in the 1980s, Fed Chairman Paul Volcker allowed the fed funds rate to more than double in less than two years’ time to over 20 percent, which helped kill inflation but also caused the most severe recession since the Great Depression.

According to recent conservative estimates from the Congressional Budget Office, as the federal budget grows, the cost of paying interest on the debt will keep increasing until it accounts for about 24 cents of every dollar spent by 2050. And that’s assuming interest rates will remain historically low.

So even moderate increases in the fed funds rate would push the cost of servicing the debt much higher, causing the government to borrow more money and kicking us into a vicious cycle of economic despair.

Biden can talk a good game about “returning our fiscal house to order,” but it’s clear he doesn’t understand why prices are going up—and that his policies will keep them high for the foreseeable future. That might cost Democrats control of the House and the Senate in the fall and perhaps Biden the White House in 2024.

That will be too bad for him and his party. But his unwillingness to confront massive spending and debt is going to cost all of us a lot more than that.