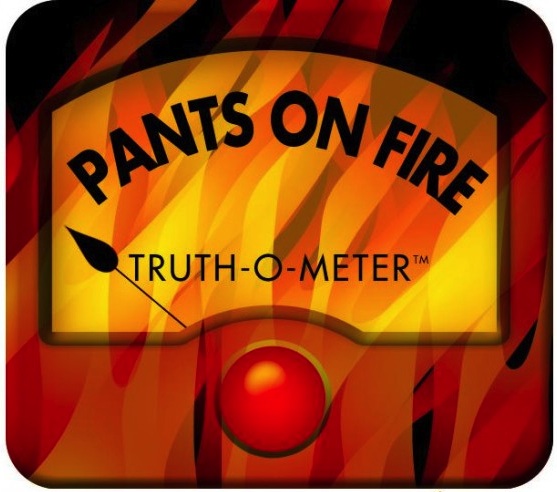 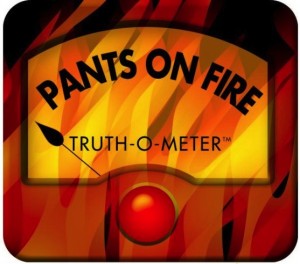 1.  Afghanistan and Iraq:  Biden accused Rep. Paul Ryan of putting two wars on the “credit card” and then bragged that he voted against both of them because he understood America could not afford them. “I was there, I voted against them,” Biden said. “I said, no, we can’t afford that.” But the truth is Sen. Biden voted for the Afghanistan resolution on Sept. 14, 2001 the Iraq resolution on October 11, 2002. It takes some brass to tell whoppers like this one!

2.  Benghazi-gate:  Biden dishonestly claimed that the administration had not been told again and again that security on the ground in Libya was inadequate. The truth is the day before the debate, in Congressional hearings on the Libya attacks, a former security director Eric Nordstrom at the State Department told of  his frustration with having the requests turned down by the government bureaucracy. He said, “For me the Taliban is on the inside of the building.” Ouch!

3.  Obama claimed that nothing Ryan had said was true:  Biden tried to paint Ryan as a liar when he said, “With all due respect, that’s a bunch of malarkey … not a single thing he said is accurate.” However, Biden was the liar. The points that Ryan was making were that (1) the White House itself had disavowed the State Department’s web apologies posted on Sept. 11th and reaffirmed later in the day; (2) Obama had failed to speak up for the Iranian protestors in 2009; (3) the Obama administration called Syrian murderous dictator, Bashar al-Assad, a “reformer”; and (4) the Obama administration is imposing defense cuts and projecting weakness to America’s enemies. All of the above is true. Once can quibble over the degree in some cases. But one cannot simply say it is completely untrue.

4. No Democrat endorsed Ryan’s Entitlement Reform Plan: Biden claimed that not one Democrat supported Ryan’s plan to reform entitlements. Biden lied. Democratic Senator Ron Wyden (Ore.) and former Clinton budget director Alice Rivlin worked with Ryan to develop his entitlement reforms. Both of these Democrats endorsed Ryan’s plans and have not withdrawn that support. Biden knew it, but decided to lie to the public on the chance that no one would check him on the facts.

5.  $716 billion taken from Medicare: Biden repeated the oft repeated lie team Obama has been telling for two years — that cuts to Medicare were somehow actually coming back to Medicare to make it more secure. That is completely false. The CBO and every reputable fact checker has blown this lie out of the water. But both Obama and Biden continue to shamelessly tell this lie. The took $716 billion from Medicare to help fund ObamaCare and keep it from appearing to be budget busting.

6.  Ryan’s budget tried to cut the security budget, not us:  In an attempt to avoid criticism for being asleep on the anniversary of 9/11 and leaving our embassy and consulate in Libya where there was every reason to believe an attack was imminent. Ryan’s budget proposal called for a 19% overall decrease in non-defense discretionary spending. However, Ryan’s budget does not even mention embassy security. Team Obama made up that number by applying 19% across the board. The truth is one can reduce an overall budget without making any change to embassy security. Moreover, one could reduce security at the embassy in nations like the France, UK, Germany, etc. and still beef up the security in hot spots like Libya. The outrageous truth is the Obama administration called for cuts to embassy security just days AFTER the 9/11 embassy attacks this year.

7.  Let the tax cuts expire only for the millionaires and billionaires:  Biden acted as if only millionaires will see higher taxes, but the truth is individuals earning $200,000 which includes many middle-class families with two wage-earners and small business owners will see the taxes increased. Biden consistently calls individuals earning $200,000 “millionaires and billionaires” which is simply not honest and it is designed to distort and hide the real impact of their plan to hike taxes on middle income Americans and small business job-creators.

8.  Obama has met with Netanyahu a dozen times:  Biden claimed that Obama has met with Israeli Prime Minister “a dozen times.” This is simply false. It isn’t close to a dozen. Obama has met with Netanyahu several times. One of the more well publicized meetings is now famous for Obama’s mistreatment of the Prime Minster. Obama required hims to enter through a back entrance, left him in a meeting room for figure out dinner plans on his own, and refused to take a picture with him. In an open mic gaffe, Obama expressed his distain for the Prime Minister. Biden’s response was factually false and it did not honestly address the point that Ryan had made — that Obama refused to meet with Netanyahu in New York last month and decided instead to appear on the View television show where he referred to himself as “eye candy.” This sent the wrong message to Israel’s enemies.

10.  Iranian Nuclear Program.  Biden tried to argue that Obama has successful prevented Iran from obtaining nuclear weapons. He cited crippling sanctions. Iran is closer today to nuclear weapons than it was the day Obama took office. That fact is unassailable. Meetings and talks have gotten nowhere. And the sanctions are full of loopholes and carve outs. There is no doubt that the sanctions have hurt the Iranian economy, but they have nothing to stop the nuclear program. And the Iran leadership is fine with a weak economy, if they can obtain the bomb. The bomb makes them strong and extends the regime. A strong economy is comparatively unimportant to them. They will not go without no matter how weak the economy is. Biden’s answer ignored these facts.

More:  There were more misrepresentations. But we’ll leave it there. But the truth is it takes a lot of brass to spend the last week calling the opposing campaign of being liars while sending your guy out lie throughout the VP Debate and when the president himself has been shockingly dishonest about Benghazi-gate. Neither Obama nor Biden have any business calling anyone a liar. They should look inward.