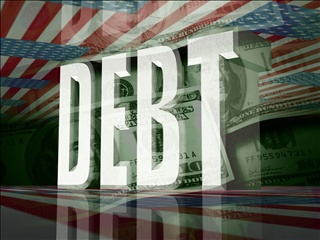 The Congressional Budget Office issued its latest budget and economic outlook: Government spending is projected to outpace federal tax revenues over the next decade, driving up the debt to record-high levels.

The federal government collected $17 billion more in revenues in 2016 than in 2015, and most of that money came from individual income taxes. Overall, the budget office predicts that revenues will rise by 4 percent on average over the next decade, rising to 18.4 percent of gross domestic product by 2027.

Despite the increasing amount of taxes that the federal government is collecting from the American people, the amount the government spends is even greater.

The budget office projects that spending on major benefit programs such as Medicare and Social Security as well as increasing interest on the debt will outpace federal revenues in the coming years.

While federal revenues are expected to rise by 4 percent, outlays are projected to rise by 5 percent per year on average over the next decade, hitting 23.4 percent of gross domestic product in 2027.

According to the report, the budget deficit totaled $587 billion in 2016 and is projected to more than double to $1.297 trillion in 2026 and rise to $1.408 trillion in 2027. “Those accumulating deficits would drive debt held by the public from its already high level up to its highest percentage of gross domestic product (GDP) since shortly after World War II.”

Rising outstanding debt will have adverse effects on the economy, the budget office says, increasing the likelihood of a fiscal crisis. In addition, the ability of lawmakers to use tax and spend policies to deal with unexpected challenges would decline.

While the report depicts a bleak fiscal picture for the federal budget, it does project that the United States will see an increase in economic growth in the coming years.

“Continued economic expansion over the next two years will virtually eliminate slack in the economy, thus putting upward pressure on inflation and interest rates,” the report states. “GDP will expand at an average annual pace of 2.1 percent from the fourth quarter of 2016 to the fourth quarter of 2018, after having risen at an annual rate of 1.8 percent last year.”

“So we have some real economic growth challenges going forward, but we’re not in the sort of crisis that existed eight years ago,” he said.