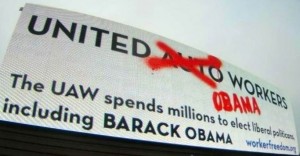 It’s official: The United Auto Workers lost the representation vote at the Volkswagen Chattanooga plant. The cleverly named nooga.com has the story. The vote was close: 89 percent of workers voted, and they rejected the union by a 712-626 vote.

What’s remarkable about this is that the company and the union colluded in trying to get the workers to vote for union representation. The reason is that Volkswagen’s German union, IG Metall, which under German law has seats on the company’s board, wanted to install the UAW as the workers’ bargaining representatives. If you want to see evidence of this collusion, click on the link and look at the expressions on the faces of Volkswagen Chattanooga President Frank Fischer and UAW leader Gary Casteel. These are not happy campers. They still hold out of the prospect of some kind of workers’ council on which the union would represent the workers. But they seem to clearly understand that most of the plant’s employees don’t want UAW representation.

My guess is that you could sum it up in one word: Detroit. The Chattanooga workers evidently understand that UAW contract demands and acquiescence in them by the Detroit automakers led to the bankruptcy of two of the three Detroit-based automakers — and not entirely coincidentally to the bankruptcy of Detroit’s city government. Any short-term gains they might get from union representation would, apparently in their view, be outweighed by the likelihood of long-term disaster.

As for the prospect of representation by union-shop stewards against the hideously onerous demands of the company’s foremen — well, in today’s factory settings, where management understands that they have to seek workers’ cooperation and rely on their conscientiousness and ingenuity, that specter didn’t seem as compelling an argument as it perhaps was to General Motors employees in 1937.

I suspect that the union will try to void the election somehow by appealing to the Obama appointees on the National Labor Relations Board. And the company, in collusion because of a desire to go along to get along with IG Metall in its larger plants in Germany, may not put up much of a defense. Nonetheless this is still a huge defeat for the UAW. They have not been able to even come close to organizing non-U.S.-based auto company plants in the South and in states like Ohio and Indiana (no foreign-based manufacturer, except for the joint venture between Mazda and Ford, has sited a plant in what they have reason to believe is or will be UAW-dominated Michigan). The UAW hoped that they could win a vote, in collusion with the employer, in Tennessee. No such luck. Most Americans, it seems, don’t want to head down on the path to another Detroit.

Michael Barone is the Senior Political Analyst at The Washington Examiner.