Air Force general: Adversaries developing capabilities that are ‘better than what we currently have in many areas’ 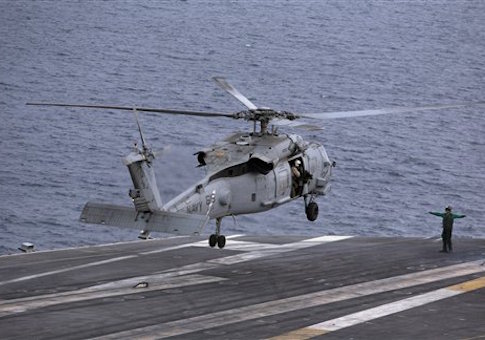 A U.S. Navy official signals its helicopter as it prepares for landing on the aircraft carrier USS Theodore Roosevelt (CVN 71), a missile cruiser and a nuclear-powered submarine during Exercise Malabar 2015, some 152 miles off eastern coast of Chennai, India, Saturday, Oct. 17 / AP

U.S. adversaries including China, Russia, and Iran are developing military capabilities that will allow them to compete with shrinking and aging American forces in the coming years, according to a new report.

The report, authored by the American Enterprise Institute and the Foreign Policy Initiative, warns that U.S. adversaries have been bolstering their militaries and purchasing cheaper weapon systems as the United States cuts its defense budget and delays acquisition of new equipment. Both China and Russia have increased their defense budgets by double digits in recent years, for example, while the United States could reduce its military spending by as much as $1 trillion in a decade under cuts known as sequestration.

“After a procurement holiday in the 1990s and a hollow buildup during the Iraq and Afghanistan wars, American military capabilities have declined independently and relatively to adversaries like China, Russia, and Iran,” the report said.

These adversaries are “closing the technology gap” with the United States, the report added.

The size of the U.S. Navy fleet and the total number of Air Force squadrons have dwindled by more than half since the end of the Cold War. Of the 54 squadrons, less than half are combat ready.

Additionally, several Air Force planes have been in use for more than two decades, including the B-52 long-range bomber, the A-10 Warthog, and the F-15 Eagle fighter jet.

“These older planes are already vulnerable when operating against advanced adversary aircraft and air defense systems such as the Chinese J-20 stealth fighter and the Russian S-400 surface-to-air missile system,” the report said.

Russia plans on delivering the S-300 variant of the anti-aircraft system to Iran by next year, which will not result in added sanctions on Tehran due to a loophole in the recent nuclear deal between the Islamic government and world powers. Russian forces are also allying with Iran to help prop up Syrian President Bashar al-Assad and target rebel groups in Syria, including some backed by the United States.

Gen. Mark Welsh, head of the U.S. Air Force, told Fox News in May that the “gap has closed” between the capabilities of America’s military and its adversaries.

“China and Russia are two good examples of countries who will be fielding capability in the next three to five years; if they stay on track, that is better than what we currently have in many areas,” Welsh said.

“Fighter aircraft in the next three to five years that have more capability than what we currently have sitting on the ramp,” he continued. “The F-35 will stay a generation ahead of them. F-22 will, too. Everything else we have will not stay ahead. The gap has closed.”

U.S. ground forces have also reduced their presence around the world amid budget cuts. The Army has decreased its forces in Europe by 35 percent since 2012 and has resorted to using British helicopters to complete training exercises. The cuts come as Russia continues to support separatists in the conflict in eastern Ukraine, which has claimed more than 8,000 lives since last April.

“We have to figure out how you make 30,000 feel like 300,000,” Lt. Gen. Ben Hodges, the Army’s commanding general in Europe, told the New York Times in reference to America’s shrinking presence in Europe since the Cold War.

The number of U.S. military forces stationed overseas has declined by nearly 200,000 since the end of the Cold War, according to the report.

The Department of Defense is also spending less money on actual combat activity, the report notes. Civilian workers and contractors at the Pentagon now outnumber the 1.36 million active-duty personnel in the military.

A smaller and less prepared U.S. military has failed to deter aggressors overseas, as evidenced by Russia’s recent interventions and China’s militarization of the South Chia Sea, the report said.

“If American political leadership continues to underfund and overuse the military, it will not result in a less ambitious foreign policy,” it said. “It will result only in greater risk to American national interests.”