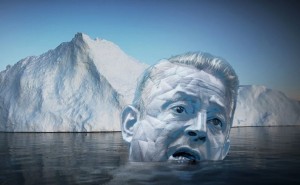 The IPCC’s call to phase out fossil fuels is economic nonsense and ‘morally outrageous’ for the developing world.

On Friday, the UN published its landmark report into climate change, which claimed with “95 per cent” certainty that global warming is man-made.

The Intergovernmental Panel on Climate Change’s report, compiled by 259 leading scientists, warned that without “substantial and sustained reductions” of greenhouse gas emissions, the world will experience more extreme weather.

However, critics have questioned the scientists’ use of computer forecasting, which, they say, has produced fatalistic scenarios that fail to take into account fully that atmospheric temperatures have barely changed in the past 15 years.

The Intergovernmental Panel on Climate Change, which published on Friday the first installment of its latest report, is a deeply discredited organization. Presenting itself as the voice of science on this important issue, it is a politically motivated pressure group that brings the good name of science into disrepute.

Its previous report, in 2007, was so grotesquely flawed that the leading scientific body in the United States, the InterAcademy Council, decided that an investigation was warranted. The IAC duly reported in 2010, and concluded that there were “significant shortcomings in each major step of [the] IPCC’s assessment process”, and that “significant improvements” were needed. It also chastised the IPCC for claiming to have “high confidence in some statements for which there is little evidence”.

Since then, little seems to have changed, and the latest report is flawed like its predecessor.

Perhaps this is not so surprising. A detailed examination of the 2007 report found that two thirds of its chapters included among its authors people with links to the World Wildlife Fund (WWF) and there were many others with links to other ‘green’ activist groups, such as Greenpeace.

In passing, it is worth observing that what these so-called green groups, and far too many of the commentators who follow them, wrongly describe as ‘pollution’ is, in fact, the ultimate in green: namely, carbon dioxide – a colorless and odorless gas, which promotes plant life and vegetation of all kinds; indeed, they could not survive without it. It is an established scientific fact that, over the past 20 years, the earth has become greener, largely thanks to increased atmospheric carbon dioxide.

Be that as it may, as long ago as 2009, the IPCC chairman, Dr Rajendra Pachauri – who is a railway engineer and economist by training, not a scientist, let alone a climate scientist – predicted that “when the IPCC’s fifth assessment comes out in 2013 or 2014, there will be a major revival of interest in action that has to be taken. People are going to say: ‘My God, we are going to have to take action much faster than we had planned.’” This was well before the scientific investigation on which the latest report is allegedly based had even begun. So much for the scientific method.

There is, however, one uncomfortable fact that the new report has been – very reluctantly – obliged to come to terms with. That is that global warming appears to have ceased: there has been no increase in officially recorded global mean temperature for the past 15 years. This is brushed aside as a temporary blip, and they suggest that the warming may still have happened, but instead of happening on the Earth’s surface it may have occurred for the time being in the (very cold) ocean depths – of which, incidentally, there is no serious empirical evidence.

A growing number of climate scientists are coming to the conclusion that at least part of the answer is that the so-called climate sensitivity of carbon – the amount of warming that might be expected from a given increase in atmospheric carbon dioxide (caused by the use of fossil fuels: coal, oil, and gas) – is significantly less than was previously assumed to be the case.

It is no doubt a grudging acceptance of this that has led the new report to suggest that the global warming we can expect by the end of this century is probably rather less than the IPCC had previously predicted: perhaps some 2.7F (1.5C) What they have not done, however, is to accept that the computer models on which they base all their prognostications have been found to be misleading. These models all predicted an acceleration in the warming trend throughout the 21st century, as global carbon dioxide emissions rose apace. In fact, there has been a standstill.

The true scientific method is founded on empirical observation. When a theory – whether embedded in a computer program or not – produces predictions that are falsified by subsequent observation, then the theory, and the computer models which enshrine it, have to be rethought.

Not for the IPCC, however, which has sought to obscure this fundamental issue by claiming that, whereas in 2007 it was 90 per cent sure that most of the (very slight) global warming recorded since the Fifties was due to man-made carbon emissions, it is now 95 per cent sure.

This is not science: it is mumbo-jumbo. Neither the 90 per cent nor the 95 per cent have any objective scientific basis: they are simply numbers plucked from the air for the benefit of credulous politicians and journalists.

They have thrown dust in the eyes of the media in other ways, too. Among them is the shift from talking about global warming, as a result of the generally accepted greenhouse effect, to ‘climate change’ or ‘climate disruption’. Gullible journalists (who are particularly prevalent within the BBC) have been impressed, for example, by being told now that much of Europe, and in particular the UK, is likely to become not warmer but colder, as a result of increasing carbon dioxide emissions interfering with the Gulf Stream.

There is nothing new about this canard, which has been touted for the past 10 years or so. Indeed, I refer to it explicitly in my book on global warming, An Appeal to Reason, which first came out five years ago. In fact, there has been no disruption whatever of the Gulf Stream, nor is it at all likely that there could be. As the eminent oceanographer Prof Karl Wunsch has observed, the Gulf Stream is largely a wind-driven phenomenon, and thus “as long as the sun heats the Earth and the Earth spins, so that we have winds, there will be a Gulf Stream”.

So what is the truth of the matter, and what do we need to do about it?

The truth is that the amount of carbon dioxide in the world’s atmosphere is indeed steadily increasing, as a result of the burning of fossil fuels, particularly in the faster-growing countries of the developing world, notably China. And it is also a scientific fact that, other things being equal, this will make the world a warmer place. But there are two major unresolved scientific issues: first, are other things equal?, and second, even if they are, how much warmer will our planet become? There is no scientific basis whatever for talking about ‘catastrophic climate change’ – and it is generally agreed that if the global temperature standstill soon comes to an end and the world is, as the IPCC is now suggesting might well be the case, 1.5ºC warmer by the end of the century, that would be a thoroughly good thing: beneficial to global food production and global health alike.

So what we should do about it – if indeed, there is anything at all we need to do – is to adapt to any changes that may, in the far future, occur. That means using all the technological resources open to mankind – which will ineluctably be far greater by the end of this century than those we possess today – to reduce any harms that might arise from warming, while taking advantage of all the great benefits that warming will bring.

What we should emphatically not do is what Dr Pachauri, Lord Stern and that gang are calling for and decarbonise the global economy by phasing out fossil fuels.

Before the industrial revolution mankind relied for its energy on beasts of burden and wind power. The industrial revolution, and the enormous increase in prosperity it brought with it, was possible only because the West abandoned wind power and embraced fossil fuels. We are now – unbelievably – being told that we must abandon relatively cheap and highly reliable fossil fuels, and move back to wind power, which is both unreliable and hugely costly.

This is clearly an economic nonsense, which would condemn us to a wholly unnecessary fall in living standards.

But what moves me most is what this would mean for the developing world. For them, abandoning the cheapest available form of energy and thus seriously abandoning the path of economic growth and rising prosperity on which, at long last, most of the developing world is now embarked, would mean condemning hundreds of millions of their people to unnecessary poverty, destitution, preventable disease, and premature death.

All in the name of seeking to ensure that distant generations, in future centuries, might be (there is no certainty) slightly better off than would otherwise be the case.

Not to beat about the bush, it is morally outrageous. It is just as well that the world is unlikely to take the slightest notice of the new IPCC report.

Nigel Lawson is a British journalist and a former Member of Parliament and a former member of Margaret Thatcher’s cabinet. This article was published in the Telegraph (London).