Climate Models Have Been Wrong About Global Warming For Six Decades

Climate models used by scientists to predict how much human activities will warm the planet have been over-predicting global warming for the last six decades, according to a recent working paper by climate scientists.

“Everyone by now is familiar with the ‘pause’ or ‘slowdown’ in the rate of global warming that has taken place over the past 20 years of so, but few realize is that the observed warming rate has been beneath the model mean expectation for periods extending back to the mid-20th century—60+ years,” Patrick Michaels and Chip Knappenberger, climate scientists at the libertarian Cato Institute, write in a working paper released in December.

Michaels and Knappenberger compared observed global surface temperature warming rates since 1950 to what was predicted by 108 climate models used by government climate scientists to predict how much carbon dioxide emissions will warm the planet.

What they found was the models projected much higher warming rates than actually occurred.

“During all periods from 10 years (2006-2015) to 65 (1951-2015) years in length, the observed temperature trend lies in the lower half of the collection of climate model simulations,” Michaels and Knappenberger write, “and for several periods it lies very close (or even below) the 2.5th percentile of all the model runs.” 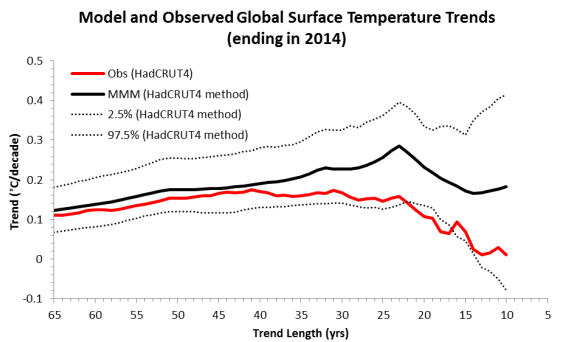 To further bolster their case that climate models are over-predicting warming rates, Michaels and Knappenberger looked at how climate models fared against satellite and weather balloon data from the mid-troposphere. The result is the same, and climate models predicted way more warming than actually occurred. 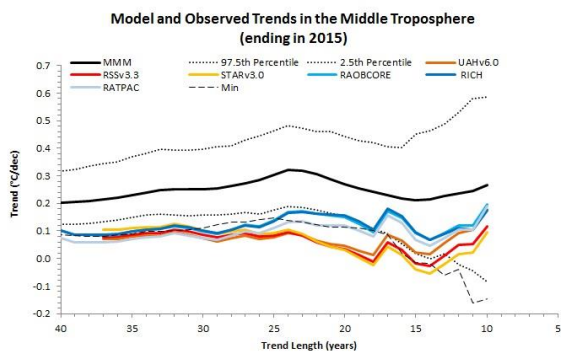 “This is a devastating indictment of climate model performance,” Michaels and Knappenberger write. “For periods of time longer than about 20 years, the observed trends from all data sources fall beneath the lower bound which contains 95 percent of all model trends and in the majority of cases, falls beneath even the absolute smallest trend found in any of the 102 climate model runs.”

“The amount of that over-prediction comports well with a growing body of scientific findings and growing understanding that the sensitivity of the earth’s surface temperature to rising atmospheric greenhouse gas levels… lies towards (and yet within) the low end of the mainstream assessed likely range.”

Satellite temperatures, which measure the lowest few miles of the Earth’s atmosphere, show there’s been no significant global warming for the last two decades despite rapidly rising carbon dioxide levels in the atmosphere.

The so-called “hiatus” in warming has sparked an intense debate among climate scientists over what’s caused warming to disappear. Dozens of theories have been put forward as to why global warming has stalled, but no one has cracked the case.

Michaels and Knappenberger, however, suggest the “hiatus” and the previous decades of overblown temperature predictions point to a huge flaw in climate science: the climate isn’t as sensitive to CO2 as previously thought.

Climate scientists typically put climate sensitivity at 3 degrees Celsius, but a slew of new studies suggest that’s way too high an estimate based on how much warming has been observed in recent decades. One estimate put together by the U.K.-based Global Warming Policy Foundation last year found climate sensitivity may be as low as 1.75 degrees Celsius — almost half what mainstream climate models use.