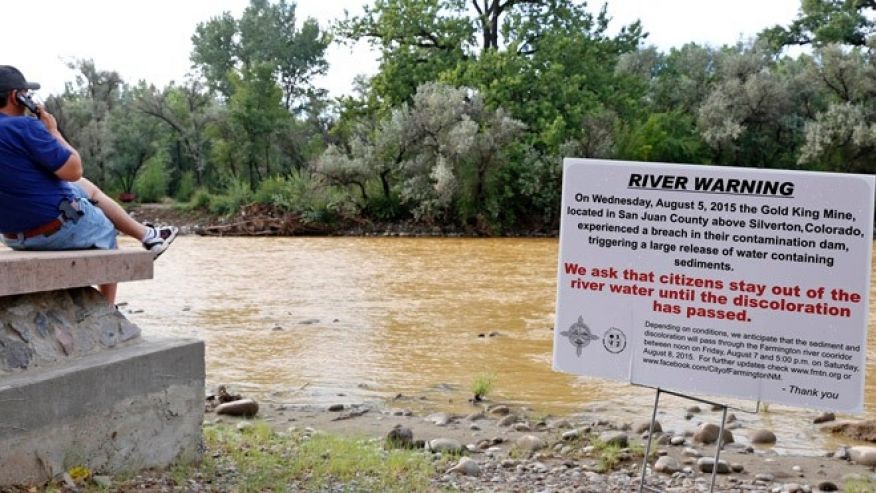 A warning sign from the city is displayed in front of the Animas River as orange sludge from a mine spill upstream flows past Berg Park in Farmington, N.M., Saturday, Aug. 8, 2015. About 1 million gallons of wastewater from Colorado’s Gold King Mine began spilling into the Animas River on Wednesday when a cleanup crew supervised by the Environmental Protection Agency accidentally breached a debris dam that had formed inside the mine. The mine has been inactive since 1923. (Alexa Rogals/The Daily Times via AP) (AP/The Daily Times)

Grace: (noun) An act or instance of kindness, courtesy or clemency. Mercy, pardon.

Here in northwest Colorado we feel like we’re at the epicenter of federal policy actions with regard to land and the environment. When you think of the war on coal, we are the bullseye. The irony is that we are the true stewards of the air, water and land. On a sunny day the sky is deep blue and we love it.

As a retired Control Room Operator at one of the largest coal-fired power plants in the U.S., I know firsthand how much time, effort and money go into keeping things clean. We hunt. We fish. We ski. We have a vested interest in maintaining the environment.

And yet we can never do enough to satisfy the EPA. EPA has been on mission creep since its inception in 1970. And somewhere in the intervening years between then and now, a line was crossed. The line between good common sense solutions and heavy-handed job crushing regulations. Somewhere along the line, EPA quit being the “good guys” and became the enemy of average citizens and the U.S. economy.

And now, last week here in Colorado, EPA created one of the worst environmental disasters in United States history. Three million gallons of toxic waste were dumped into the Animas River and is working its way to Lake Powell in Arizona. Last I heard, 500 gallons per minute were still leaking into the river. You can’t raft, fish, swim or drink. Let me say up front that our regional EPA administrator, Shaun McGrath is a man of honor. He came forward and took responsibility. I’ve met Shaun and he’s one of the good guys.

My harshest criticism is reserved for EPA Administrator Gina McCarthy. It took six days for her to publicly acknowledge the toxic spill and apologize for it. My impression of McCarthy is that she is an intelligent, arrogant, ideologue, who is hell-bent on fundamentally transforming the United States of America by regulation. Thousands of them. A death march to January of 2017

McCarthy should have dropped what she was doing last weekend to come along side our senators to survey the damage.

It won’t happen, but I believe that McCarthy should step down as EPA Administrator. EPA needs a very serious overhaul. It’s a bipartisan problem and it has taken decades to reach this crisis point.

It’s my sincere hope that no one becomes ill as a result of the toxic spill and that the Animas River can become healthy and vibrant again very soon.

It is also my hope that southwest Colorado’s economy remains strong.

It would be wonderful if, as a result of the spill, the EPA learned about grace. Receiving it and giving it.

EPA needs to step back and re-evaluate how it conducts business. Somehow they need to find their way back across the line, leaving job crushing regulations behind and rediscovering common sense rules that work and still protect the environment.

How ironic, that the very agency entrusted with protecting our water, created its own Love Canal.