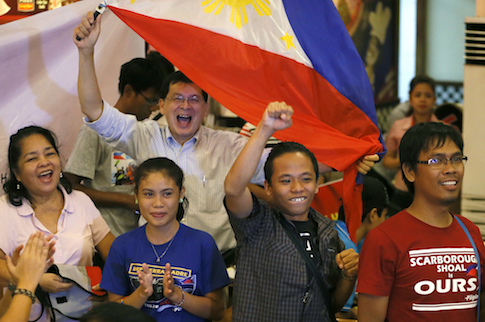 A United Nations tribunal on Tuesday ruled unanimously against China’s history-based claim to sovereignty over 90 percent of the South China Sea.

The ruling by the Permanent Court of Arbitration in The Hague legally nullifies a multi-year effort by China to take control of the strategic Southeast Asian waterway by making historical claims and occupying disputed terrain.

The arbitration proceedings were sought by the Philippines government, which opposes China’s takeover of several of the Spratly Islands, small islands and reefs located in the southern part of the sea near the Philippines.

A key part of the tribunal’s ruling dismissed China’s so-called “nine-dash line,” an ill-defined border containing some 90 percent of the South China Sea. Beijing had asserted the zone is Chinese maritime territory.

The court said that while Chinese ships and fishermen, along with those of other regional states, used islands in the South China Sea in the past, “there was no evidence that China had historically exercised exclusive control over the waters or their resources.”

“The Tribunal concluded that there was no legal basis for China to claim historic rights to resources within the sea areas falling within the ‘nine-dash line,’” the court said in a statement.

As part of its takeover bid, China has been building up some 3,200 acres of island terrain in the sea and recently began deploying military facilities and forces, including missiles and aircraft, on the islands in a bid to solidify its claims.

The Pentagon, after years of restraint, in October began challenging Chinese efforts at regional hegemony by resuming naval freedom of navigation operations and reconnaissance overflights.

In Beijing, Chinese supreme leader Xi Jinping rejected the ruling. According to the official Xinhua news agency, Xi said China would not accept any proposal or action by the court, and said that the islands in the South China Sea have been China’s since ancient times.

The Obama administration played down the ruling in an apparent bid to avoid upsetting Beijing. Administration comment was limited to a statement from State Department spokesman John Kirby and background comments by senior officials. The Pentagon declined to comment.

Kirby said the State Department was studying the 500-page decision but called the ruling a legally binding decision and “important contribution to the shared goal of a peaceful resolution to disputes in the South China Sea.”

The court “unanimously found that the Philippines was acting within its rights under the convention in initiating this arbitration” and that it is “final and legally binding on both China and the Philippines,” he added.

“In the aftermath of this important decision, we urge all claimants to avoid provocative statements or actions,” Kirby said.

U.S. and Philippines armed forces on Monday launched the annual large-scale exercises known as Balikatan, or “shoulder to shoulder,” that are part of the U.S. military and diplomatic pivot to Asia.

Chinese Defense Ministry spokesman Yang Yujun on Tuesday warned in response to the ruling that the military would protect the country’s national sovereignty, security, maritime rights, and interests.

The Pentagon is on alert for any Chinese military aggression in the South China Sea, a Pentagon official said. One possible action could be the establishment by China of an air defense identification zone as part of efforts to step up sea control.

A Chinese military spokesman said June 30 that the creation of such a zone would be based on “whether China is facing security threats from the air, and the level of the threat.”

Other potential action could be for China to seize a grounded Philippines freighter near Second Thomas Shoal in the Spratlys. The Philippines navy has been using the rusting ship that ran aground in 1999 as a military outpost.

The complicated legal opinion for the first time sets out under international law precisely how islands, reefs, and rocks in the sea determine the exclusive economic zones of regional states as set out in the Law of the Sea Convention. The convention set up the arbitration tribunal.

The United States has signed the convention but not ratified it over security concerns related to sovereignty issues.

The unfavorable ruling was partly the result of China’s refusal to take part in the arbitration. Beijing insisted the court did not have jurisdiction over the sea and insisted the illegal dispute should only have been resolved through bilateral China-Philippines talks.

The court rejected China’s position noting that the convention setting up the court permits a ruling on issues even when one party does not participate.

China’s activities since the arbitration process was initiated in 2013 also undermined the court’s efforts to resolve the dispute, by building on the Spratlys and damaging the ecology of the region.

“The Tribunal noted that China has (a) built a large artificial island on Mischief Reef, a low-tide elevation located in the exclusive economic zone of the Philippines; (b) caused permanent, irreparable harm to the coral reef ecosystem and (c) permanently destroyed evidence of the natural condition of the features in question,” the court said.

“The Tribunal concluded that China had violated its obligations to refrain from aggravating or extending the parties’ disputes during the pendency of the settlement process.”

In Manila, Philippines Foreign Affairs Secretary Perfecto Yasay urged “all those concerned to exercise restraint and sobriety,” adding that the decision supported international law and the 1982 UN Convention on the Law of the Sea.

Taiwan, which controls an island in the Spratlys islands, also rejected the court ruling as undermining its claims.

Vietnam welcomed the court’s ruling and said it confirmed Hanoi’s control over both the Paracels and the Spratlys.

“Today’s ruling is clear, unambiguous, and reinforces the international order,” Thornberry said in a statement. “The United States should act to give this ruling weight by continuing our free navigation of the seas with our allies and partners in the region, maintaining a robust and ready naval presence in the area, and demonstrating that we are a reliable ally to countries in the region.”

Last week, Abraham Denmark, the assistant defense secretary for East Asia, testified before a joint House hearing of Armed Services and Foreign Affairs subcommittees that the United States is opposing China’s military buildup in the sea.

“Although the United States has noted these developments and expressed our objections to China’s unilateral changing of the strategic landscape of the South China Sea, our primary concern revolves around risk of unintended escalation or conflict among claimants,” Denmark said. “Once completed and outfitted, these facilities will greatly improve China’s capabilities to enforce its maritime and territorial claims, and project power further from China’s shores.”

“Furthermore, the construction of hangars, anti-aircraft guns, and fuel and water underground storage facilities would support extended deployments of multiple aircraft and ships,” he said.

Former State Department official John Tkacik, a specialist on China affairs, said the ruling is a major setback for Chinese hegemony over the southern areas of the sea but may not affect Chinese claims to the Paracels, in the northern part, where China has faced off against Vietnam.

“The tribunal went out of its way to nullify all China’s (and Taiwan’s) claims to large, 200-nautical mile exclusive economic zones saying that none of China’s landforms even qualify as ‘islands,’ so China cannot make any maritime claims in the southern South China Sea whatsoever,” Tkacik said.

Additionally, the court dismissed China’s assertion of a historical claim to the Spratlys.

“It’s a total loss for China,” Tkacik said. “And it should teach them that if they want to prevail in international legal actions, they should darn well put together a legal team and make their case to the judges.”

Fanell said as a career intelligence officer he is worried about the risk to U.S. and allied forces from some type of Chinese military response.

“Given Beijing’s response to the [court] ruling, we should expected the PLA navy and their maritime militia to respond aggressively at sea, to include events such as ramming incidents in the Spratly Islands and even a blockade of Second Thomas Shoal,” he said.

China also could begin building fortifications on Scarborough Shoal, he said, adding that Beijing could also step up military provocations in the East China Sea against Japan or take economic actions.

The tribunal was made up of five legal experts. They included Judge Thomas A. Mensah of Ghana, Judge Jean-Pierre Cot of France, Judge Stanislaw Pawlak of Poland, Prof. Alfred H.A. Soons of the Netherlands, and Judge Rüdiger Wolfrum of Germany. Judge Mensah was president of panel.