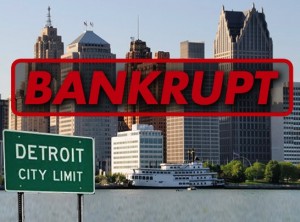 If there’s an iron rule in economics, it is Stein’s Law (named after Herb, former chairman of the Council of Economic Advisers): “If something cannot go on forever, it will stop.”

Detroit, for example, can no longer go on borrowing, spending, raising taxes and dangerously cutting such essential services as street lighting and police protection. So it stops. It goes bust.

Cause of death? Corruption, both legal and illegal, plus a classic case of reactionary liberalism in which the governing Democrats — there’s been no Republican mayor in half a century — simply refused to adapt to the straitened economic circumstances that followed the post-World War II auto boom.

Corruption of the criminal sort was legendary. The former mayor currently serving time engaged in a breathtaking range of fraud, extortion and racketeering. And he didn’t act alone. The legal corruption was the cozy symbiosis of Democratic politicians and powerful unions, especially the public-sector unions that gave money to elect the politicians who negotiated their contracts — with wildly unsustainable health and pension benefits.

When our great industrial competitors were digging out from the rubble of World War II, Detroit’s automakers ruled the world. Their imagined sense of inherent superiority bred complacency. Management grew increasingly bureaucratic and inflexible. Unions felt entitled to the extraordinary wages, benefits and work rules they’d bargained for in the fat years. In time, they all found themselves being overtaken by more efficient, more adaptable, more hungry foreign producers.

The market ultimately forced the car companies into reform, restructuring, the occasional bankruptcy and eventual recovery. The city of Detroit, however, lacking market constraints, just kept overspending — $100 million annually since 2008. The city now has about $19 billion in obligations it has no chance of meeting. So much city revenue has had to be diverted to creditors and pensioners that there is practically nothing left to run the city. Forty percent of the streetlights don’t work, two-thirds of the parks are shut down and emergency police response time averages nearly an hour — if it ever comes at all.

Bankruptcy, which will radically cut payments to bondholders and retirees, is the only chance to start over. Yet, if a Detroit bankruptcy succeeds, other cities will be tempted to follow suit. Dozens of other large urban areas have similarly massive pension and debt obligations, with commensurately denuded services and exorbitant taxes — leading to a vicious cycle of depopulation that makes everything worse. Detroit has lost more than 60 percent of its population since 1950.

The moral hazard increases if the federal government steps in to help. The Obama administration is therefore firmly opposed to any “bailout,” recognizing both the political toxicity of the word and the fiscal consequences of a Detroit precedent that invites other cities to line up with a tin cup. Washington cannot afford a nationwide federal bailout of insolvent cities.

However, under pressure from the public-sector unions, whose retirees will necessarily be victimized, the administration will likely offer “assistance” — which implies whatever kind of non-cash payments, indirect funds from other ongoing federal programs and enterprise-zone tax subsidies that it can get away with.

But Detroit is an object lesson not just for other cities. Not even the almighty federal government is immune to Stein’s Law. Reactionary liberalism simply cannot countenance serious reform of the iconic social welfare programs of the 20th century. Nancy Pelosi and Harry Reid are pledged to their inviolability. President Obama will occasionally admit that, for example, Medicare cannot go on as is, but then reverts to crude demagoguery when Republicans propose a structural reform, such as premium support for Medicare or something as obvious as raising the retirement age to match increasing longevity.

On the contrary. Obama added one enormous new entitlement (Obamacare) and, in his last State of the Union address, proposed yet another (universal preschool).

None of this is inevitable. In Wisconsin, Republicans showed that they recognize the perils of unconstrained government growth and will take on the unchecked power of government unions. Democratic Detroit, on the other hand, has for 50 years conducted a contrary experiment in myopia and the most imprudent passivity.

It doesn’t take a genius to see what happens when the entitlement state outgrows the economy upon which it rests. The time of Greece, Cyprus, Portugal, Spain, the rest of insolvent social-democratic Europe — and now Detroit — is the time for conservatives to raise the banner of Stein’s Law and yell, “Stop.” You can kick the can down the road, but at some point it disappears over a cliff.

Charles Krauthammer writes for the Washington Post and appears on Fox News.