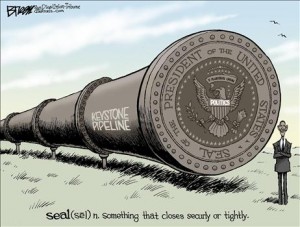 The decision to yet again delay the final permit for the popular Keystone XL pipeline was made not in the White House or at the State Department, but in a posh private residence in the Sea Cliff neighborhood in northwestern San Francisco. It was there on February 19 that former vice president Al Gore and Senate Majority Leader Harry Reid made the pilgrimage to Tom Steyer’s home to kiss the ring of the hedge fund-billionaire turned super-donor, in exchange for $400,000 that night and a promise of $100 million more to come. Steyer’s sole demand? Stop the pipeline.

There were six Senate Democrats present: Reid, Sheldon Whitehouse of Rhode Island, Patrick Leahy of Vermont, Ben Cardin of Maryland, Jeanne Shaheen of New Hampshire, and Mark Udall of Colorado. All had voted against the pipeline in a test vote offered as a budget amendment last year, although 17 Democrats voted for the bipartisan measure.

They were also joined by one aspiring Democratic senator, Rep. Gary Peters of Michigan. Peters voted against the bipartisan Northern Route Approval Act, H.R. 3, which would require the presidential permit to be issued. The bill passed the House 241 to 175 last May, but Reid has refused to allow the Senate to consider it.

On March 10, with the group who huddled in Sea Cliff taking the lead, Democrats headed to the Senatefloor to sing for their supper. They spoke all night about global warming but refused to offer any legislation to address it. They hardly sought media coverage, and the only audience that mattered was Steyer, who tweeted his approval: “I applaud the 28 senators that stood #Up4Climate last night.”

The following week, Steyer’s spokesman made clear that he demanded more than talk for his $100 million life raft to struggling Democratic senate candidates. The quid pro quo was made explicit, and public. “If we’re collectively going to put $100 million into this cycle, how much will go into key races depends on Keystone,” said top Steyer political hand Chris Lehane.

A week ago, Steyer got exactly what he asked for when the State Department (which had famously promised action before the end of 2011 on this permit application originally submitted in 2008) punted a decision until after the 2014 elections. “This is rotten eggs for TransCanada and good news on Good Friday for those who oppose Keystone,” Steyer boasted.

The crassly political decision by the Obama administration flies in the face of the standard President Obama personally laid out for the pipeline just last year, when he said: “Our national interest will be served only if this project does not significantly exacerbate the problem of carbon pollution,” that is, greenhouse gas emissions. “The net effects of the pipeline’s impact on our climate will be absolutely critical to determining whether this project is allowed to go forward.”

Keystone XL passed that test with flying colors; indeed, by Obama’s standard approving the project immediately should be imperative, because the State Department determined that denying the permit would increase greenhouse gas emissions 28 to 42% because the alternative transport options of rail and tanker are less efficient.

Why then is Steyer so insistent? It could be because he invested in Kinder Morgan, which is building a competing pipeline – although he has promised to divest that stake. Or it could be because of his green energy investments. But most likely it is because Steyer is a true believer and his hardened opposition to the pipeline has become impervious to evidence or argument.

Regardless, Sean McGarvey, president of North America’s Building Trades Unions, asked the key question: “Why does President Obama continue to side with radicals instead of the middle class?”

McGarvey continued: “It’s ironic that at the same time billionaire conservatives are coming under increasing scrutiny and criticism by the left for their involvement in politics, there is nary a word about the political spending by liberal billionaires that negatively impact the job prospects and livelihoods of working class Americans.”

The pithiest explanation came from Terry O’Sullivan, general president of the Laborers’ International Union of North America: “It’s not the oil that’s dirty, it’s the politics.”

Now the Democrats have given Steyer precisely what he wants: midterm Senate elections whose outcome will determine the fate of the Keystone XL pipeline.

They have done so at their own peril.

Yes, $100 million buys a bunch of TV ads. But every vote for a Senate Democrat is now a vote to ratify this corrupt bargain, keep Harry Reid in power, and stop the Keystone XL pipeline from being built. That’s likely to hurt Democrats more in November than Steyer’s money helps them.

Phil Kerpen is president of American Commitment.  This story was published in USAToday.