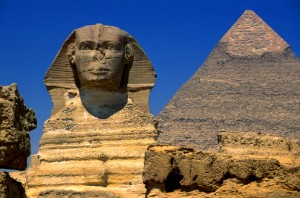 Whoever strives to attain absolute powers is condemned to eternal insecurity.  The rulers of Egypt were and are no exceptions.  For this reason, the country’s current national misery lies both in its present and its past.  For millennia, successive empires reduced the people to abject slavery.  The 19th and 20th centuries respectively, saw monarchs and military strongmen ruling as despots over an increasingly divided people desiring either more Westernization or re-Islamization.  The long rule of Muhammed Ali’s dynasty corrected none of the fundamental evils of the Ottoman Empire.  The cruelty and hypocrisy of Gamal Abdel Nasser’s military dictatorship, the oscillation of Anwar Sadat between the Soviet Union and the United States, and between secularism and the Muslim Brotherhood, and the cynical corruption of the Mubarak era, all contributed to the gradual moral debasement of the Egyptian people.

Since, without exception, successive military and civilian governments performed poorly, religion’s appeal increased with every disappointment.  As Sayyid Qutb, the father of Islamic fundamentalism, advanced from romantic nationalism and mainstream Islamic beliefs to religious-based terrorism, the lack of economic growth, unemployment, inadequate basic social services and decent education pushed a sizable number of Egyptians gradually toward the Muslim Brotherhood and membership in a variety of terrorist organizations both at home and abroad.

In spite of the myth of “the blessed popular revolution” of January 25, 2011, the fundamentals of the Egyptian government have remained by and large unchanged.  The military is well organized and still in control.  The Muslim Brotherhood and an assortment of Islamist groups are seriously handicapped by incompetence and reduced to mass demonstrations, media campaigns, systematic intimidation and sporadic violence.  The Supreme Council of the Armed Forces (SCAF) presents itself in its traditional role as the guarantor of political and social stability.  Meanwhile, the Muslim Brotherhood and its Islamist allies are condemned to hover between their professed respect for democracy and their actual intent of establishing a totalitarian religious state.  Hopelessly suspended over the cliff of overwhelming popular demand for more freedom and their absolutist agenda, the Islamists increasingly appear to occupy the equivalent of a political no man’s land.  Thus, for the foreseeable future, the military will continue to retain the upper hand over the situation.

The election of the Muslim Brotherhood’s candidate Muhammed Mursi to the presidency by the narrowest margin possible is overshadowed by the dissolution of the recently elected Parliament and the announcement that members of the Constitutional Commission will be appointed by the SCAF.  To add insult to injury, the Muslim Brotherhood declared its candidate the winner of the presidential elections even before the competent commission was able to finish tallying the votes.  Thus, every recent development toward “democracy” only added new faults to the old ones.  The coercive nature of Muhammed Mursi’s victory and the political and legal restrictions on the newly elected representative bodies clearly undermined the tenuous foundations and stability of the emerging political order.  The result is a situation showing all the characteristics of mutual political insincerity.  Muhammed Mursi was declared president to avert the mob-induced descent into anarchy.  On the other hand, peremptorily, he was stripped of all meaningful powers by the military.  Muhammed Mursi is president only by title but not in reality.  The political order that proceeds from these principles is hypocritical and will share the fate of its predecessors.  The cohabitation of the military and the Muslim Brotherhood is in the long run non-viable and, therefore, only possesses the rudimentary features of factuality.

Where does all this leave Egypt?  It leaves both government and society in a vacuum.  The underdeveloped political system excludes the possibility of a “Turkish solution” in which the Islamist government, the secular military and the professional judiciary jointly moves toward a stable balance among these competing forces.  The chances that a “Pakistani solution” will lead to stability are non-existent.  Unlike in Pakistan, the Egyptian military cannot justify its political role as a counter weight to a hostile power comparable to India.  The “Indonesian solution” is also impossible, because of the militant nature of the Muslim Brotherhood.  Unless the military and the Muslim Brotherhood can provide increased prosperity to the people, the current regime is doomed to failure.

Is there a way out of this seemingly insoluble conundrum?  Perhaps.  Most importantly, the military is not as homogenous as it used to be.  It represents a wide range of society and better educated, due to the demand of manning the increasingly sophisticated military equipment.  By the same token, the Muslim Brotherhood has become more diverse and pluralistic.  If the military as well as the Muslim Brotherhood would recognize the limits of their powers and refrain from stunting the growth of the political system and from trying to impose an exclusive national ideology on the Egyptian people, they will be rewarded with increased prosperity.  If both would stand behind progress toward a republican form of government, the economy could grow within a stable political and legal environment.  However, political moderation, economic freedom and structural reforms would be of little assistance unless the two dominant political forces understand that the future lies in enduring peace in the Middle East and in solid cooperation with the rest of the world, including the United States and the European Union.  Only then could Egypt extricate itself from its self-imposed political, economic, social and ideological miseries.