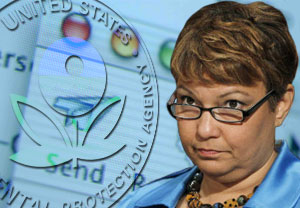 President Barack Obama and, for that matter, most of America seem woefully ignorant about a scandal unfolding at the U.S. Environmental Protection Agency. As hard as it is to believe, outgoing Administrator Lisa Jackson actually appears to have had agency personnel create a fictitious employee by the name of “Richard Windsor” so that Jackson could appropriate the Windsor’s email address for her own purposes.

We’re not talking about some alias to be used for personal correspondence but a totally false identity in whose name official business was allegedly conducted created specifically to avoid federal record-keeping and disclosure requirements. And none of this would ever have been uncovered were it not for the courage of a still anonymous whistleblower and the Competitive Enterprise Institute’s Christopher Horner, an attorney with the legal smarts and experience needed to unravel it all.

Earlier this week, thanks to Horner’s good work, the EPA was supposed to produce the first installment of some 12,000 secret, previously undisclosed emails. Not because it wanted to but because a federal court order required it to.

Under the order, the EPA was to provide the first installment of 3,000 e-mails with three additional installments of 3,000 e-mails to follow. Rather than provide the required emails, however, EPA’s cover letter accompanying its production of emails said it “produced more than 2,100 emails received or sent” by Jackson on an official alias e-mail account.

All fine, well and good – except that not one of those emails was from “Richard Windsor’s” account. Not one. Yet it is certain the account exists because Horner found three Windsor emails using other means. Instead the EPA provided such absurdly silly and unresponsive e-mails as the daily news briefs published by the Washington Post, and EPA national news clippings, a pathetic attempt to avoid a contempt citation that came only after a week’s worth of unsuccessful attempts to push the official response date down the road.

A pattern exists: the EPA creates a fake e-mail account for its administrator to avoid scrutiny; it doesn’t produce any of the fake e-mails even though they are required by law to do so; when specifically required by court order, the EPA seeks endless delays; and, when the delaying tactics prove fruitless, EPA fails to provide either the number or the type of e-mails required.

To put it simply, the agency is trying to run out the clock, hoping against hope that people will lose interest and move on to something else.  This, in our judgment, must not be allowed to happen.

The point of this scheme was to evade public accountability, to conduct official government business under the table, outside of the public eye. When Congress and others asked for Ms. Jackson’s EPA correspondence and email, the “Richard Windsor” e-mails would fall outside that request and, eventually, be destroyed allowing official EPA business to be conducted secretly. That falls well short of conducting business in the open and in a transparent fashion. It also falls well short of the standards required by federal law.

If this were merely a matter of an official “alias” – e.g. [email protected] instead of her “official” email name, it would be no big deal. But the “Richard Windsor” identity is not an alias: it is a totally fake persona obviously created to evade record-keeping and disclosure requirements.  It may not seem it on its face, but it an issue so serious that anyone who received a “Richard Windsor” email or corresponded with “Richard Windsor” – knowing it was Lisa Jackson and not reporting it, should at the very least be barred from succeeding her as administrator of the EPA.

“Despite EPA’s ‘everyone does it’ line — the lesser-known, somewhat inconsistent subtitle to ‘most transparent administration, ever’ — Richard Windsor appears to be the first false identity assumed to hide a senior federal official’s public records,” Horner says. “One reason for this might be that it’s against the law. The readiness with which we already know other administration officials, including lawyers, accepted the practice suggests Windsor wasn’t the only such false identity Obama officials have created to subvert federal record-keeping and disclosure laws.”

Yes, America, this e-mail scandal is worse than originally believed. Far worse. And if “everyone does it” in this Administration as the EPA has claimed, President Obama needs to answer some questions as well.  And the United States Senate, which has slew of presidential nominees to confirm in the next few months, has the obligation to start asking.

George Landrith is president of Frontiers of Freedom, a Virginia-based public policy organization. Peter Roff is a senior fellow at FOF.