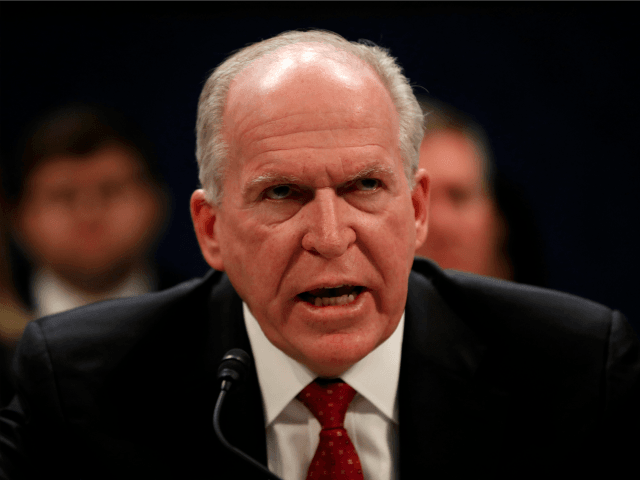 Brennan tweeted his response: “My principles are worth far more than clearances. I will not relent.”

Among his many left-leaning defenders, Democratic Sen. Richard Blumenthal had by far the most absurd response, calling it an “illegal” violation of the First Amendment.

Huh? A security clearance is not a right, otherwise all of us would have it. It’s a privilege and, as with all privileges conferred by the government, it is subject to revocation if the person who has it abuses it.

Sadly, Brennan didn’t just abuse it as a private citizen by leveraging his access for lucrative TV gigs in which he did little other than trash the president and mislead the public.

There’s also ample evidence he abused his security clearance by violating the law while acting as the CIA’s chief, a far more serious charge, in our opinion.

In 2014, he flat-out denied hacking into computers used by the Senate Intelligence Committee, which was at the time investigating the CIA’s use of harsh interrogation measures against terrorists.

After the computer break-ins were proven beyond a doubt, Brennan apologized but refused to acknowledge wrong-doing by the CIA. Despite calls for his dismissal even by Democrats, President Obama stood by his man. Brennan stayed.

But this wasn’t the last time Brennan’s CIA spied on U.S. citizens. Far worse than spying on Congress was the CIA’s involvement in the 2016 election, which increasingly appears to be not just out of bounds, but outright illegal.

As USA Today reported earlier this year, “Glenn Simpson, founder of the Fusion GPS research firm that hired former British agent Christopher Steele, told investigators that the FBI had shared the existence of ‘a human source from inside the Trump Organization’ in a September 2016 meeting with Steele.”

“Shared,” as in exploited along with the CIA. So the CIA, which by law cannot spy on U.S. citizens on U.S. soil, seems to have partnered in spying on Trump.

Based on recent bizarrely angry comments, Brennan has a near pathological hatred of Trump. A growing pile of evidence suggests he co-ran a spying operation intended to smear Trump as a stooge of the Russians to help Hillary Clinton win the presidency.

It failed, but that’s still criminal behavior. And the bogus investigation by Special Counsel Robert Mueller of Trump’s alleged “collusion” with Russia continues.

Brennan shouldn’t be in the clear. The Senate should fully investigate the CIA’s role under Brennan in trying to subvert our democracy. It’s time the American people find out what really happened in the last election.

And, for the record, no one took away Brennan’s First Amendment rights. To say otherwise is either stupidity or extreme disingenuousness.

Yet that’s the new talking point. Even disgraced former Director of National Intelligence James Clapper claims Brennan’s loss of his security clearance is an “infringement” of his free speech rights. Others say Trump has “silenced” Brennan.

Hogwash. No one has taken his right to speak away from him. He’s free to tweet, give speeches, show up on TV, host conferences, write books and rage-filled op-eds to his heart’s content. He just can’t have privileged access to the nation’s secrets when he does so. He doesn’t deserve it.

As a side note, Brennan should have never been approved as CIA director in the first place. He admits to voting Communist at least once in his life, a sign of extremism and poor judgment that shouldn’t be rewarded with the most powerful spying post in our government.

That’s now even more obvious, based on his behavior while serving as a high-level official at the CIA. He was at times erratic, to be kind, overtly political and at other times wholly incompetent and deceitful. The latter includes his helping the Obama White House to lie about the Sept. 11, 2012 attack on a U.S. diplomatic post in Benghazi, Libya.

As for the others who took part in spying on Trump, used their security clearances for political purposes, lied to Congress and the public, or merely profited from from knowing the nation’s secrets as high-level “advisers” or TV talking heads, they too should also have their clearances lifted.

American taxpayers pay well over $60 billion a year to have 17 separate intelligence agencies collect secrets. It’s in the national interest. Those secrets are not the private property of spy-agency bureaucrats.

The stewards of those secrets have a sacred responsibility not to abuse their privilege. Brennan did, and for that he lost his privilege. It’s that simple.