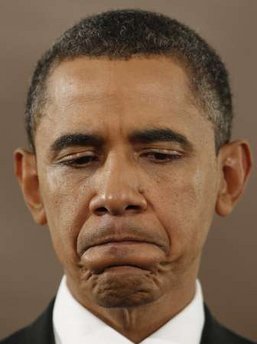 President Obama has done next to nothing to build confidence in government.

It’s happened by this point in every modern two-term presidency: If we weren’t sick of the guy to start with, we certainly are by now. What once seemed like roguish charm, or bracing surety, or nuanced intelligence, has curdled into self-indulgence, or arrogance, or passivity. Voters punish the president in the midterms; congressmen investigate him; political journalists, eager to cultivate sources in the coming campaigns, save all their nice adjectives for the presidents-in-waiting, and their aides.

But none of that is going to stop me from piling on, too. If a few things break Barack Obama’s way, history may well judge his presidency quite successful. As presidencies recede, we tend to focus on a few big achievements or failures, and Obama might eventually be seen to have staved off a depression; to have established a national health-care safety net; to have patiently set relations with China and Iran on a sounder footing (for details on the latter, see Robert D. Kaplan’s dispatch on page 17). Yet there’s one area where Obama has clearly failed so far: he’s done next to nothing to build confidence in government itself. His lack of obvious interest in doing so has been baffling. Republicans—at the national level, anyway—run against the government, of course, and any screwup only supports their case. For Democrats the situation is rather different, as Bill Clinton understood. With greater passion even than the Tea Party, his top aides used to call the bureaucracy their enemy; they saw their role as battling the agencies to get action, often via executive order. During a symposium at the Clinton Library in Little Rock, Arkansas, in November, Bruce Reed, who was Clinton’s chief domestic-policy adviser, observed that the default in Washington is to do nothing. “Executive actions were a way to make sure that the agencies were always working,” Reed said. “We wanted to keep the pedal to the floor.” That’s why Clinton was able to stage a comeback after the Republicans shut down the government. Republicans offered Obama a similar opening by shutting the government down again in fall 2013. At almost the same moment, the president rolled out the digital exchange for his cornerstone initiative. Fate could not have contrived a more dramatic opportunity to prove government’s efficacy. Instead, only six people in the country were able to sign up for health care the first day, and, though the system now works and shows signs of controlling costs, its image has never recovered. In that instance, Obama held the central element—the quality of the exchange itself—in his own hands. Though that can’t be said of all the other ways the government has stumbled on his watch, a pattern of inattention, if not disregard, is unmistakable, from the failure of the Minerals Management Service to check on oil platforms in the Gulf of Mexico, to the sloppy efforts to sort out what to do about children illegally crossing the border. As James Fallows reports in our cover story, Obama did show some interest in one major government dysfunction, the structural problems of the military. He commissioned a farsighted thinker on defense, former Senator Gary Hart, to gather experts and prepare a proposal. Hart submitted his report—and never heard another word about it from the White House. Republicans have exerted even less leadership here. The Pentagon is the one department upon which they would lavish more money, while showing even greater indifference than Democrats to the result—which, as Fallows shows, is a mounting pile of defeats. And yet, as the politicians say, this government could once send a man to the moon … Funny thing: in this issue, you can also find evidence of the government accomplishing an astonishing feat. With little notice, NASA has helped keep a colony in space for 5,200 days now. Virgin Galactic may have suffered a tragic setback in its pursuit of commercial space travel, but NASA has so far sent 135 astronauts back and forth to the International Space Station without a hitch. We may be quarreling again with the Russians down here, but up there the two governments work hand in hand. It can all seem a bit circular: not only does the spaceship whip around the Earth every 92 minutes, but the astronauts spend most of their time maintaining the craft and their own health. Still, Charles Fishman’s story suggests, this mission is evidence that, somewhere in the bureaucracy, someone is still dreaming big: the Space Station is a crucial stepping-stone toward traveling among the planets.