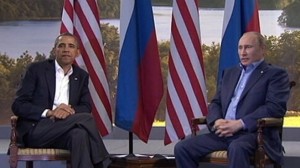 On February 23, five days before Russia invaded Ukraine, National Security Adviser Susan Rice appeared on Meet the Press and shrugged off suggestions that Russia was preparing any kind of military intervention: “It’s in nobody’s interest to see violence returned and the situation escalate.” A return to a “Cold War construct” isn’t necessary, Rice insisted, because such thinking “is long out of date” and “doesn’t reflect the realities of the 21st century.” Even if Vladimir Putin sees the world this way, Rice argued, it is “not in the United States’ interests” to do so.

It was a remarkably transparent case of pretending the world is what we wish it to be, rather than seeing it as it is.

On February 28, Russian troops poured into Ukraine. As they did, Secretary of State John Kerry spoke to Foreign Minister Sergei Lavrov, his Russian counterpart. Kerry briefed reporters after their talk, plainly unaware of the developments on the ground. Kerry said that Russia wants to help Ukraine with its economic problems. Lavrov had told him “that they are prepared to be engaged and be involved in helping to deal with the economic transition that needs to take place at this point.”

Hours later, television screens across the world displayed images of Russian soldiers infiltrating Crimea and Russian artillery rolling through Sevastopol. Obama administration officials told CNN’s Barbara Starr that the incursion was not “an invasion” but an “uncontested arrival” and that this distinction was “key” to understanding the new developments.

But euphemism can’t alter reality. So, President Obama delivered a statement: “The United States will stand with the international community in affirming that there will be costs for any military intervention in Ukraine.” The White House wasn’t quite ready to lead the international community in a response to an intervention that was underway, but with the snarl of a puppy, the president announced we would “stand with” others if the uncontested arrival somehow turned into real military intervention. (Thirty minutes after his warning, no doubt meant to convey toughness and resolve, Obama appeared at a Democratic National Committee pep rally and declared the opening of “happy hour.”)

Four days later, with Russia in effective control of Ukraine’s Crimean peninsula, Vladimir Putin held a press conference—a rambling series of claims and statements that sometimes contradicted each other and often contradicted reality. Putin maintained, for instance, that there were no Russian troops on the ground in Ukraine, and that the Russian-speaking soldiers who often identified themselves as Russian soldiers were probably local defense groups who may well have bought their uniforms from military surplus stores.

Where others saw the agitprop of an emboldened authoritarian, the White House chose to see hope. Administration officials seized on one sentence of his blather and expressed optimism. “Regarding the deployment of troops, the use of armed forces so far, there is no need for it.  .  .  . Such a measure would certainly be the very last resort,” Putin said. Obama national security officials saw this claim—which came days after Russian troops had been deployed—as evidence that Putin was looking for an “off-ramp.” And soon we had a name for this new Obama approach to the crisis: “de-escalation.”

For five years, the Obama administration has chosen to see the world as they wish it to be, not as it is. In this fantasy world, the attack in Fort Hood is “workplace violence.” The Christmas Day bomber is an “isolated extremist.” The attempted bombing in Times Square is a “one-off” attack. The attacks in Benghazi are a “spontaneous” reaction to a YouTube video. Al Qaeda is on the run. Bashar al-Assad is a “reformer.” The Iranian regime can be sweet-talked out of its nuclear weapons program. And Vladimir Putin is a new, post-Cold War Russian leader.

In the real world, it was a pen pal of the late jihadist Anwar al-Awlaki who opened fire on soldiers at Fort Hood. The Christmas bomber was dispatched from Yemen, where he was instructed by Al Qaeda in the Arabian Peninsula. The Times Square bomber was trained and financed by the Pakistani Taliban. Benghazi was a deliberate attack launched by well-known terrorist groups. Al Qaeda is amassing territory and increasing its profile. Assad is a brutal dictator, responsible for the deaths of more than 100,000 Syrians. The Iranian regime is firmly entrenched as the world’s foremost state sponsor of terror and remains determined to lead a nuclear state. And in Russia we face a Cold War throwback willing to use force to expand Russian influence.

And Vladimir Putin, it turns out, is who we thought he was. Unfortunately, so is Barack Obama.

Stephen F. Hayes is a senior writer for  The Weekly Standard.