“In Eastern Europe and around the world, memorials, boulevards, and plazas are renamed for Ronald Reagan — because they see him as their liberator.” 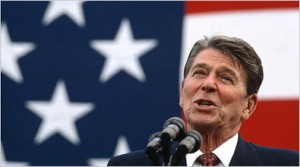 Presidential greatness is determined by making an enduring impact – by changing the course of history for the better. By this standard, few are Ronald Reagan’s equal.

He changed the way Americans viewed themselves and the way the world viewed America.

When he took office, most academics believed that America was a nation in decline. Conventional wisdom said communism might be contained for a time, but eventually they would bury us.

Most intellectuals believed that the United States would eventually lose the Cold War and that communism was the unavoidable wave of the future. The economic news wasn’t any better.

Ronald Reagan accepted none of this. He believed America’s best days lay ahead.  And he set out to prove it.  He did not mark time – he led a revolution.

His ideas and leadership transformed the United States — economically, militarily and morally.  He lowered taxes, reduced burdensome regulations and unleashed the entrepreneurial spirit in America.  Americans again were proud to be Americans.

But Ronald Reagan’s influence did not stop at our borders.  President Reagan transformed the world as well.  He predicted that Marxism would be banished to the ash heap of history and that freedom and democracy would expand and march on.

And then he set out to make it happen.

Yet, many opposed him and he had to fight against conventional wisdom.  He was ridiculed for referring to communism as the “Evil Empire.”

Yet, undeterred, President Reagan stood in front of the great symbol of Soviet repression, the Berlin Wall, and demanded, “Mr. Gorbachev tear down this wall.”

Many in government thought the only way to deal with communist regimes was to appease them.  Their underlying fear was that Kruchev was right – that they would someday bury us.

Reagan knew better.  Rather than hoping to merely co-exist, he planned to defeat communism.  When asked what his strategy was on the Cold War, he replied, “We win. They lose.” But he didn’t just say it. He made it happen.

His most strident critics reviled him as a warmonger, yet he defeated Soviet communism without war.

And in Eastern Europe and around the world, memorials, boulevards, and plazas are renamed for Ronald Reagan — because they see him as their liberator.  And who can blame them?

It is said that you can judge a nation by the heroes it honors.  It reflects well on America that we honor Ronald Reagan.

Excerpt of remarks by George Landrith, president of Frontiers of Freedom, at the 2012 Ronald Reagan Gala. Click here for his full remarks.