Freedom Centers Constitutional and Political Freedom Giving up on Obamacare? ...

Giving up on Obamacare?

The Affordable Care Act has been a disaster for Americans and for the party that imposed it on America. 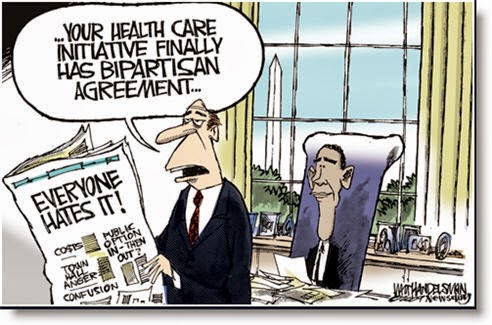 I grew up in a Democratic family. I have been a registered Democrat since age 18, a Democratic candidate for statewide office in Colorado and a party precinct captain in that caucus state. I’ve volunteered for numerous Democratic candidates and contributed to party causes and campaigns. The 2014 election results were extremely disappointing for me, but hardly a surprise.

I voted for Barack Obama in 2008, then lost my job in the Great Recession. I was lucky; my brother lost his job and his house. I survived on part-time jobs while paying out-of-pocket for my health insurance.

I voted for President Obama again in 2012, then received a cancellation notice for my health insurance. This was due to ObamaCare, the so-called Affordable Care Act. However, I couldn’t afford anything else.

Midterm elections in the second term of a presidency are difficult on the president’s party, and the Obama administration’s crisis-of-the-month headlines weren’t helpful. Ultimately, though, ObamaCare was the catalyst for my party’s midterm thumping.

ObamaCare is a failure. For anyone who thinks this is a misprint because no Democratic activist would make such a comment, let me add that it is too big, too complicated and too expensive. Without a public option within its network of exchanges, ObamaCare is a giant blank check to the insurance companies that pushed it through Congress. It punishes responsible consumers like me and treats younger individuals as fools who are expected to pay the bills while not paying attention.

Now we learn in videos that came to light this week that Jonathan Gruber, MIT economist and a key architect of the Affordable Care Act, proudly relied on his perceived “stupidity of the American voter” as the basis for designing ObamaCare. Such comments, along with the program’s notoriously dysfunctional website and false assurances that people can keep their previous health plans, are insults to every citizen regardless of party.

Contrary to Medicare, which was quickly accepted at a time of economic vitality as a meaningful complement to Social Security, ObamaCare was the sequel to an overpriced economic stimulus package that didn’t stimulate very much. Those least affected by the recession benefited the most from the stimulus. I think that’s called “trickle-down economics” when Republicans do it, and the economy continues to struggle for good jobs and a real recovery. ObamaCare is part of the problem, not a solution.

For most Democrats in Congress, Medicare was originally a model for health-care reform. Single-payer, universal coverage was the favored approach. Then Republicans let loose the “socialized medicine” boogeyman and Democrats panicked.

Fearful that doing nothing was worse than doing the wrong thing, Democrats gave up on Medicare for the masses and opted for a drastic alternative. ObamaCare is an outrageous combination of private-market inflation, government bureaucracy, excessive mandates and a ridiculously delayed implementation schedule. When the thing finally kicked in, it hit hard—and there is plenty more pain on the way.

Worst of all, ObamaCare looks and feels exactly like what it is: a health-care plan devised by lawyers and corporate executives rather than true health-care providers. Democrats are top-heavy with attorneys, and this hurts the party on many issues.

If Hillary Clinton is looking for an immediate opportunity to distance herself from the Obama administration, she should promise to appoint a licensed health-care professional, such as a physician or registered nurse, as her secretary of Health and Human Services if she is elected president. I know she hasn’t announced her candidacy, but the time has come to stop playing coy.

We Democrats need to get over ourselves, start anew on a national health-care policy, and return to our progressive principles. We claim to be the party of the underdogs, but on ObamaCare we simply catered to a different set of fat cats.

We resent Republicans who act morally superior and pretend to have a monopoly on patriotism, but an elitist attitude doesn’t look any better on us when we refuse to admit that ObamaCare is broken beyond repair. Measurable outcomes and actual effectiveness are the honest indicators of a successful program, not good intentions or high hopes.

We say that we are the party of the people, but “the people” too often become a singular, monolithic concept for us. We speak for the people, don’t you know, because we can decide what is best for them so they really don’t need to speak for themselves.

The people decided otherwise on Election Day. I hope my party is listening. When the next Congress convenes in 2015, Democrats need to work with the new Republican majority, repeal ObamaCare, override a presidential veto if necessary, and start from scratch on health-care reform.

Mr. Beu, a nonprofit professional and former hospital insurance coordinator, currently works as a counselor at a social-services agency in Denver.