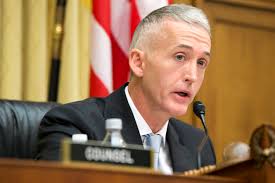 by Chris White • The Daily Caller

House Republican Trey Gowdy wants to know why a scientist with the National Cancer Institute withheld evidence from a government agency showing that a widely used herbicide does not cause cancer.

Gowdy, a South Carolina congressman who chairs the House Oversight Committee, noted in a letter Tuesday to the National Institute of Health (NIH) that NCI scientist Aaron Blair was the researcher who reviewed a separate study showing no evidence glyphosate causes cancer.

“The committee is concerned about these new revelations, especially given Dr. Blair’s apparent admission that the AHS study was ‘powerful,’ and would alter IARC’s analysis of glyphosate,” Gowdy wrote, referring to Blair’s decision to omit the research, which resulted in the International Agency for Research on Cancer (IARC) concluding in 2015 that the herbicide probably was a carcinogen.

His letter asked NIH for evidence laying out Blair’s decision to keep this separate study out of the IARC assessment. The conclusion had an impact on Monsanto, a large agribusiness that produces the weed killer Roundup, which contains glyphosate.

Monsanto is fending off waves of lawsuits from people who claim they’re suffering from cancer because of their contact with the herbicide – many of the plaintiffs have used IARC’s findings to bolster their claims.

Monsanto is trying to keep glyphosate off European lists of possibly carcinogenic chemicals. The European Chemical Agency (ECHA), which regulates chemicals on the market in Europe, ruled in March that “the available scientific evidence did not meet the criteria to classify glyphosate as a carcinogen.”

Gowdy’s concerns come after Reuters reported in June that Blair made the decision to hide the study because he believed that if the buried research were ever uncovered and included on the official record, then it probably would have reversed the IARC’s conclusion.

Other Republican lawmakers have voiced concern for the way the study was handled. Sen. Jim Inhofe of Oklahoma, for instance, sent a letter earlier this month to the Department of Health and Human Services requesting the agency make public the study showing glyphosate is a non-carcinogenic.

Blair is not the only researcher to be accused recently of tampering with important data. Internal investigators at Duke University obtained evidence showing that former lab technician Erin Potts-Kant falsified or fabricated data for medical research reports. Potts-Kant told investigators that she faked data that wound up being “included in various publications and grant applications.”

She worked in the laboratory of academic Michael Foster, who received a grant from the Environmental Protection Agency in 2007 to determine whether exposure to airborne particulates can impair lung development in newborn mice. Potts-Kant used a machine helping researchers gauge the lung function of mice to gain insight on human respiratory ailments like asthma.