Even after accounting for education and job category, men were paid more than women

Hillary Clinton’s State Department paid men $16,000 more on average in annual salary than women, according to data from the Office of Personnel Management (OPM).

The data, which is organized by calendar year, shows that men were paid more than women in each year that Clinton was heading the department as secretary of state. 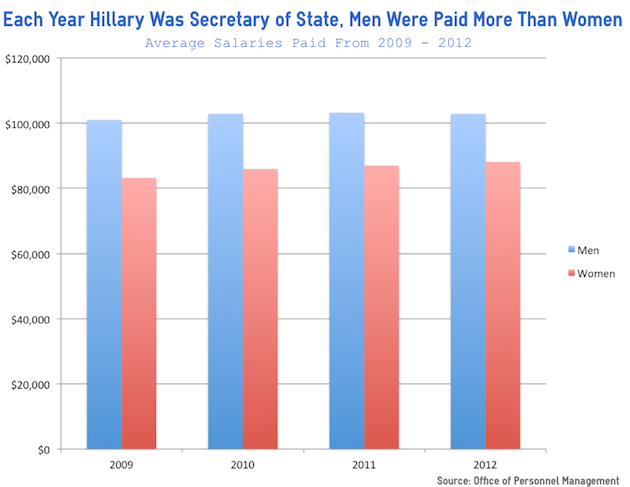 The average annual difference in pay between men and women over the four years was $16,416, according to the OPM data.

Men were paid more, even after accounting for similar ranks in education. For example, in 2009, the average salary for women working in the State Department with a bachelor’s degree was $87,561, while men with the same qualifications were paid $98,752. 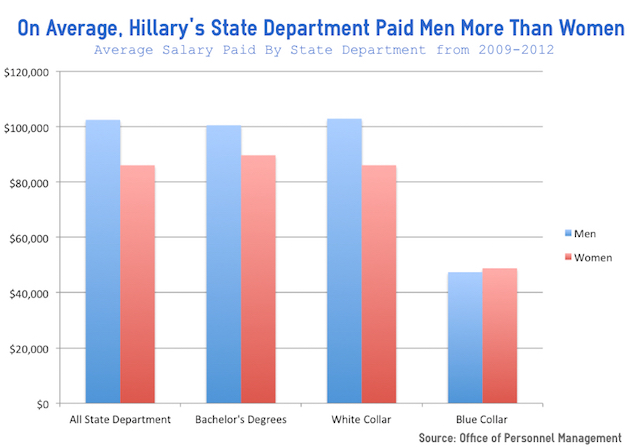 The State Department also employed more men in higher ranks than women. According to the database, there were 152 more men listed as supervisors in 2009 than women.

According to Clinton’s campaign page, she has made it part of her platform to demand equal pay for women. “Hillary Clinton continues to argue that the deck is stacked for those at the top, making it harder for families to get ahead and stay ahead, especially women,” it reads.

While the average annual gender pay gap was $16,416 in the State Department, that difference was much less when looking across all government.

When evaluating all federal civilian employees, women earned an average salary of $70,566 from 2009 through 2012, while men received an average of $78,477. Men earned $7,911 more on average than women, less than half of the difference seen in the State Department.

Neither the Clinton campaign nor the State Department responded to requests for comment.