How a Presidency Falls Apart

This is the way a presidency comes apart — not with a bang but a series of whimpers. 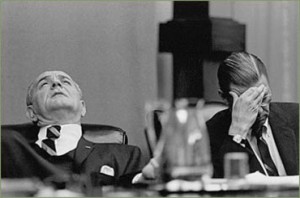 In 1968, it was called the credibility gap. Lyndon Johnson was no longer able to make it seem we were winning the war in Vietnam. Not that he hadn’t tried. But after years fighting there, the sad truth was beginning to out. The president and all the president’s men weren’t able to convince the country that they knew the way to victory there, or even a draw. All our commanders in the field seemed able to do was provide more body counts, even while Ho Chi Minh and his comrades in Hanoi were sending more and more bodies to fill their ranks in the South.

LBJ was a big man with big hopes and dreams and ambitions, but the war was swallowing his Great Society, and his own presidency. He would lose the trust of the American people, and without it no president can succeed.

A few years later, it would be Richard Nixon who gave up after the drip-by-drip revelations that added up to Watergate and a devastating loss of trust in an American president.

Jimmy Carter faced much the same downward spiral in public confidence as he proved powerless in the face of an economic malaise that would overwhelm his presidency. At the end, he was reduced to donning a sweater, turning the thermostat down, and blaming Arab oil sheikdoms for his — and the country’s — seemingly intractable problems.

Americans are not inclined to accept apathy as a substitute for action. Any more than they may accept Barack Obama’s excuses in place of a clear agenda for his second term.

Now the details of the September 11 attack on our consulate at Benghazi begin to come out, one by one, each raising more suspicions than the last.

A month has passed since what at first was described and largely dismissed as a series of spontaneous riots and assaults on our legations across the Middle East. Those were protests mainly against a stupid anti-Muslim video, we were told. But that explanation began to fray as soon as it was offered, and there’s not much left of it by now.

Now what happened at Benghazi appears more of a deliberate attack by a terrorist group urged on, or even unleashed by, a message from al-Qaida’s current chieftain — Ayman al-Zawahiri — just before the attack on our consulate there. Was that warning ignored? Or just dismissed as part of the inevitable fog of war that descends over any battlefield?

Yet the warning from al-Qaida was relayed to Washington, even to the White House situation room. It was picked up by the Associated Press. There’s doubtless more to come about the attack in Benghazi, and about how poorly we were prepared for it.

For now, the country has been left waiting and wondering. Especially about a president’s credibility, his greatest asset in any struggle. How explain Washington’s lethargy? You can almost hear the White House wishing this news story would just go away, but it doesn’t, day after day.

American foreign policy has suddenly come to the center of the presidential campaign because that policy is unraveling. What happened at Benghazi has become both the symbol and culmination of its failure. Things that are working well don’t attract that much attention and continuing interest.

This administration’s failure to protect our people in Benghazi may be the one undisputed fact — and judgment — to come out of all the different, ever changing versions of what happened at Benghazi on September 11, 2012.

We the people deserve, and increasingly demand, an explanation. The president has found time to criss-cross the country as the campaign ends, appearing at rallies to deliver speech after speech. But there is no sign he plans a White House press conference to explain what happened at Benghazi and, perhaps more important, didn’t happen. Why were we caught so unprepared after so many warnings?

This is the way a presidency comes apart — not with a bang but a series of whimpers. When a presidency winds down, it seems to do so all of a piece — the great plans and stirring phrases fade away into a general malaise. The poli-sci types should have a name for it: presidential entropy.

For now the president seems to be just playing out the clock, sticking with his talking points even as they grow less and less credible, hoping to preserve a lead he once enjoyed. There’s no doubt public trust in his administration has eroded, but how far? We’ll know November 7.

Pulitzer Prize-winning Paul Greenberg is the editorial page editor of the Arkansas Democrat-Gazette.