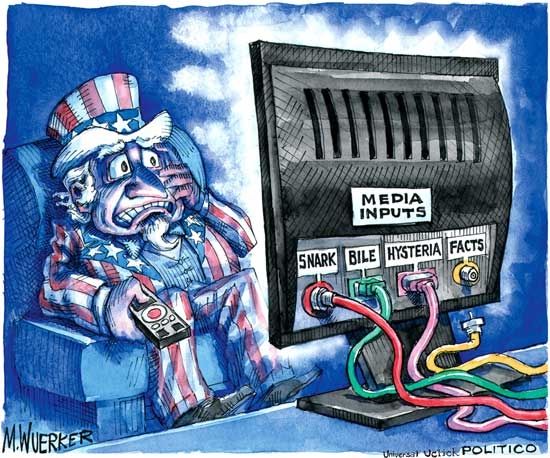 The job of newspapers was once to “comfort the afflicted and afflict the comfortable.” Today, that job seems to be to give voice to liars and shout down the truth.

You really cannot blame Democrat voters in America for fleeing in droves the fetid airwaves of MSNBC and CNN, which have suffered a collapse in ratings last week as viewers learned they have been steadily and spectacularly lied to for the past two years by the so-called “mainstream” media about the so-called Russian collusion “story.”

Examples abound of pundits and reporters from once-respected newspapers and cable “news” outlets leveling outlandish charges about this twisted fantasy of collusion between President Trump and the Kremlin. Equally alarming are the endless examples of these same “news” outlets airing and publishing outright lies told by politicians hellbent on destroying Mr. Trump.

It is a sad fact in our broken world: politicians lie. The whole point of the so-called “Fourth Estate” — that unofficial, quasi-fourth branch of government — is to mercilessly hound politicians from their comfortable lairs of mendacity.

Unless, apparently, those politicians are lying about Mr. Trump and spinning fairy tale yarns about prostitutes in Moscow hotel rooms, secret liaisons in Prague that never happened, and chance bar meetings in the Seychelles.

No one has been given more airtime and ink to spread his lies than Rep. Adam Schiff, California Democrat, chairman of the House Intelligence Committee and chief prevaricator. That anyone this dishonest is allowed to hold a position of such importance and power in Congress tells you all you need to know about Washington these days.

It also explains how a vulgar outsider and political novice like Donald Trump won the election in 2016.

Sure, Mr. Schiff should step down from the committee chairmanship. He also should be stripped of all security clearances by Democratic leadership.

But the lying politicians are not the only ones deserving our contempt and scorn. Merchants of lies in the media deserve even more contempt and scorn. The New York Times and The Washington Post led the way. Dunces at CNN and MSNBC trotted right behind.

Used to be that reporters took enormous pride in the depth of their skepticism. They would talk about how finely tuned their “BS-detectors” are. They had a nose for when somebody was peddling lies.

All that evaporated in the Age of Trump, when anything goes — so long as it slimes the president.