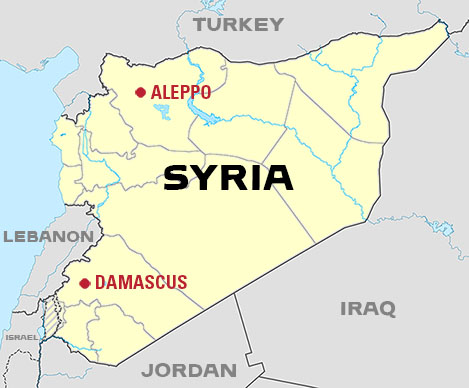 The history of the 20th and 21st centuries’ Syria has provided the most convincing proof that the intellectual maturity of a state’s alternating leaderships as well as its people depends to an overwhelming degree on their understanding of the inherent incompatibility of excepted societal morality based on customs and traditions, and of political immorality maintained by gross despotism.

The roots of the current civil war that started in the beginning of 2011, go way back to the mid-9th century when a man by the name Ibn Nusayr declared himself the “BAB” – the “gateway to truth.” Proclaiming his teachings to be the only true religion, Ibn Nusayr preached a Muslim Holy Trinity of the Prophet Muhammad, his cousin and son in law Husayn Ibn Ali, and Salman al-Farisi, a freed Persian slave of Muhammad’s. In addition, he elevated Ali to a Jesus-like incarnation of divinity. Moreover, borrowing further from Christianity, he made the symbolic presentation of bread and wine an integral part of religious services, in which the wine represents Allah himself. To add more heretic insult to multiple Muslim religious injuries, the Nusayris, also called Alawis or Ansaris, celebrate almost all Christian festivals and holidays by worshiping most of the Christian saints. Finally and most egregiously for all faithful Muslims, Ibn Nusayr denied the five pillars of Islam listed in the famous Hadith of the angel Gabriel, and rejected the Shari’a in its entirety.

Such fundamentally heretic deviations from both Sunni and Shi’a Islam earned the Nusayris/Alawis/Ansaris in the 14th century a fatwa from the religious and legal scholar Ibn Taymiyyah, in which he branded them “more heretical than the Jews and the Christians, even more so than many polytheists.” Thus, the Alawis have been persecuted by both the Sunni and the Shi’a communities with equal brutality. Indeed, throughout their troubled and bloody historical coexistence, lay an ever present fear and existential catastrophe. As a result, Syria has become the quintessential battleground not only of religious and sectarian warfare, and zero-sum political conflicts for absolute power, but of terrorism as well as religion-based political fanaticism.

Following World War I, Syria’s history has moved linearly, but in reality regressed circuitously. First, the Sunni majority was replaced by France with the rule of the Alawi minority. A brief reversal back to Sunni rule occurred between 1946 and 1963, when independence from the French mandate restored the Sunni majority to power. Yet the wheel of political fortune changed again, when the Ba’ath coup d’etat elevated the Alawi-dominated military to power. Having disposed of his only rival, Salah Jadid, who led the coup d’etat, the Alawi General Hafiz ibn Ali ibn Sulayman al-Assad seized power in 1971. Sunni revolts and uprisings under the political and spiritual leadership of the Muslim Brotherhood against Assad’s cruel despotism followed in fairly regular intervals. Equally regularly, these attempts at restoring Sunni dominance were brutally crushed by Assad’s Alawi dominated military.

Recently, what has begun as an unarmed protest in 2011 against the senseless murder of a few teenagers, has rapidly escalated into a full-blown civil war with religious and ethnic overtones, and the direct and indirect involvement of state and non-state combatants supporting or opposing the Assad regime. The result has been devastating. According to various estimates, between 500,000 and 600,000 Syrians have been killed, over a million injured, and over 12 million – half of Syria’s prewar population – have been displaced either internally or externally.

Meanwhile, the Obama and the Trump administrations alike have espoused policies that have been an incoherent jumble of direct and indirect interventions on behalf of shady and discombobulated armed groups with diametrically opposed objectives to alternately adopting the Saudi, the Turkish, and the Russian views vis-a-vis the Syrian quagmire. Both administrations have been guilty of the same political miscalculation, namely, confusing the Middle Eastern feudal mentality with the minuscule and disunited Syrian middle-class’s desire to overthrow the existing despotic regime, and the concomitant establishment of a politically and economically more equitable and more democratic political order.

Repeated peace initiatives from the UN-facilitated Geneva meeting between the Assad regime and the numerous opposition groups in June 2012 to the Russia- sponsored January 2018 Sochi talks over the future of Syria have not led to either a military ceasefire or any political transition. The combined support of Russia, Iran, and Turkey have clearly gave militarily the upper hand to the Assad regime over its opposition. Yet, propping up militarily the Assad regime will not provide a satisfactory long-term solution for Syria. Surely, the Alawi-dominated despotism cannot survive in its current form. Russia’s President Vladimir Putin knows that. However, changing the present political constellation will certainly invite new violent challenges, because the opposition is fragmented and lacks a charismatic personality who could unite the various and heterogeneous military organizations. Yet, Syria’s problems run deeper than the fate of the Assad regime. Chief among these problems is the non-existence or the weakness of the barely functioning political institutions. Moreover, military superiority will never translate to political stability. Under the uneasy cooperation of Russia, Turkey, and Iran, Syria will continue to face bloody chaos and protracted instability.

For these reasons, President Trump’s decision to withdraw the small contingent of American military forces from Syria is the right one. More than the so-called experts and the top military brass he understands that the reigning Assad regime will not be able to deny its political essence, which is continual despotism of a small Alawi minority over the Sunni majority, comprising 90% of the country’s population. Clearly, Syria has been reduced to a giant ruin. Neither Russia, nor Turkey, nor Iran has the financial and economic wherewithal to reconstruct Syria. Only the United States of America with its European allies and Saudi Arabia and the United Arab Emirates possess the power to rebuild the completely devastated country.

Under these circumstances, patience is the most effective strategic position. Once all the participants will fight each other to a standstill, could the United States of America and its allies return and lead the onerous task of the complete reconstruction of Syria’s political, financial, economic, and social institutions. In this future scenario, Russia, Turkey, and Iran cannot and will not play any meaningful role.