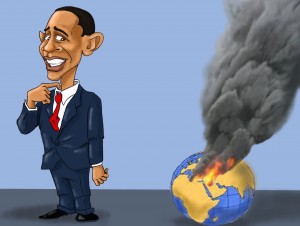 One of the things we were promised back in the 2008 election campaign was that under a Democratic administration America would be better liked and more influential in the world. Forget those dumb cowboys in the Bush/Cheney administration whose brash style grated on foreign sensibilities: Smooth, Europhile Democrats would win over the world, ushering in an era of peace and good feeling.

So, as Sarah Palin might say, how’s that hopey-changey stuff workin’ out for ya?

Not so great, as it turns out. Things got off on the wrong foot right away with Secretary of State Hillary Clinton’s botched “reset” with Russia — even the “reset button” was improperly labeled, owing to a translation error that substituted the Russian word for “overcharge.” The whole reset attempt was, at any rate, the product of wishful thinking. And it soon became clear to most observers that Russia under Vladimir Putin viewed itself as a rival, not an ally, of the United States. Russia even announced its withdrawal from a major arms-control agreement. In fact, although Mitt Romney was mocked for calling Russia our greatest “geopolitical foe” last year, that’s looking pretty spot-on today as Putin lines up behind Syrian President Bashar Assad and frustrates the United States in numerous settings across the globe. Not much of a reset here.

Then there’s our relationship with the British. Under previous administrations going back to World War II it was a “special relationship.” Now it’s … not so special. Even back in 2009, Obama treated the British rudely, leading one British pundit to ask: “Does Obama have it in for Britain?” More recently — even as British troops were dying alongside Americans in Afghanistan — Obama snubbed the British by remaining neutral on the Falkland Islands. Well, not quite neutral: In another bout of “smart diplomacy,” Obama tried to call the Falklands by their Argentine name — Las Malvinas — but blew it, calling them instead the Maldives, an entirely different set of islands located half a world away. Can someone buy this guy a globe?

Now Obama wants to do something about Syria, and — while the Russians do their best to interfere — the British have decided that they’re not going along this time, thank you. It’s the first time a British prime minister has lost a war vote since 1782. Now Obama — having boxed himself in with his off-the-cuff “red line” remarks from last year — has changed tack and decided that he, too, will consult Congress after all.

Perhaps he’s hoping to lose that vote, as well, so that at least he can blame Congress for whatever happens next. But the real question is how we got in this situation to begin with. And the answer is, through a series of unfortunate decisions ranging from Obama’s 2009 Cairo speech, which ignited the Arab Spring uprisings, through the mishandling of Libya and Benghazi, to his unscripted, and unthought-out, “red line” remarks.

Say what you will about George W. Bush’s diplomacy, but he nurtured relationships with our most important allies — like Britain — and managed to put together a huge multinational coalition for his own foray against an Arab dictator suspected of having chemical weapons. Obama’s diplomatic efforts — championed by Hillary Clinton and, now, John Kerry — are looking more and more inept by comparison: So far, our only ally in the proposed Syria venture is France, maybe.

But that’s what happens when your diplomacy is a failure. Our friends are avoiding us, our foes aren’t afraid of us, and it’s looking more and more like nobody in charge knows what they’re doing. It’s enough to make you look back fondly on the smooth, capable diplomacy of the Jimmy Carter era. Alas, we have over three years of this left. One can only hope that we, and the world, will not pay too high a price for the ineptitude at the top.

Glenn Harlan Reynolds is professor of law at the University of Tennessee and the author of The New School: How the Information Age Will Save American Education from Itself. He blogs at InstaPundit.com.