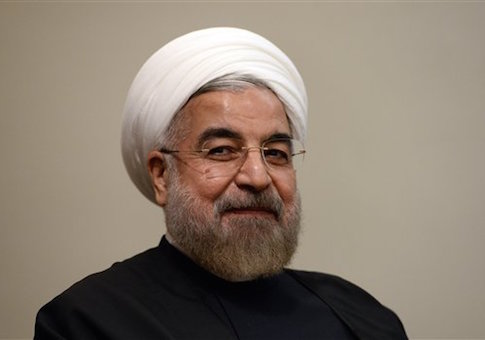 Iran continues to hide key work it undertook on nuclear weapons development while perfecting ballistic missile technology that could carry such a weapon, according to a new report from a senior Israeli military official that has fueled calls from Trump administration insiders and Congress to nix the deal ahead of a May deadline.

Significant flaws in the original nuclear deal reached by the Obama administration with Iran has enabled Iran’s ballistic missile program and permitted the Islamic Republic to obfuscate ongoing work on nuclear enrichment and possible weaponization technologies, according to Jacob Nagel, the former head of Israel’s National Security Council.

Loopholes in the original agreement have allowed Iran to continue working on advanced nuclear centrifuges that can enrich uranium—the key component in a nuclear weapon—at least 15 to 20 times faster than original models of these devices, according to Nagel, who is serving as a visiting fellow at the Foundation for Defense of Democracies, or FDD.

As the Trump administration pursues a last minute bid to address these loopholes with European allies, Iran’s refusal to discuss the issue has fueled calls from administration allies and some on Capitol Hill for the deal to be scrapped in May, when President Trump will be forced to again provide Iran with sanctions relief or walk away from the agreement.

The report comes as Iranian leaders claim that discussions about its ballistic missile program are off the table. Meanwhile, Iran has announced new space technology tests, which have long been believed to be a cover for the development of long-range ballistic missile technologies.

Iran has used the nuclear deal to claim “its right to enrichment,” according to Nagel, who recently published a report outlining flaws in the deal that have been raising concerns among Israeli and U.S. officials.

“After restrictions regarding the stockpile [of nuclear materials] and enrichment level expire, Iran may use nuclear submarines and maritime propulsion tankers as pretexts to stockpile highly enriched uranium,” according to Nagel.

Combined with Iran’s ongoing ballistic missile work, Iran’s research into advanced nuclear practices could enable it to develop a working nuclear weapon without detection under the deal.

“Iran continues to develop and test short- and medium-range ballistic missiles, as well as testing a space-launch vehicle that may facilitate the development of intercontinental ballistic missiles,” according to Nagel. “Between July 2015 and January 2018, Iran launched 23 ballistic missiles, including 14 nuclear-capable missiles in violation of United Nations resolutions banning such activity.”

Many of the deal’s flaws can be traced back to a portion of the agreement known as Section T, which is supposed to provide assurances that Iran is not engaging in any activities that would contribute to the design or development of a nuclear explosive device.

Monitoring of such activity is flawed and incomplete due to restrictions written into the deal that prevent international nuclear inspectors from accessing key Iranian sites. The issue is further complicated by the ease of covering such activity in smaller sites across Iran that may not be known to inspectors.

One senior foreign policy adviser who works closely with the White House on these issues and has viewed the report told the Washington Free Beacon that without a major fix to the deal with European allies, Trump will abandon the deal.

“The Iran deal was built to whitewash past Iranian nuclear weapons work and then, after a few years, allow Iran to conduct unlimited civilian nuclear work, all the way to being a screw’s turn away from a nuclear weapon,” said the source, who was not authorized to speak on record.

“In the meantime everyone knew Iran would keep pushing the envelope and even cheating, so they made parts of the deal like Section T politically and diplomatically unenforceable,” the source said. “Along with ballistic missile loopholes, there are the flaws that Trump is demanding get fixed or he’ll withdraw from the deal on May 12.”

A State Department official told the Free Beacon that talks with European allies about tightening the deal are ongoing, but have yet to produce a concrete agreement.

“We have discussed the areas the president identified in January where he wants to see improvements—including ensuring Iran never comes close to developing a nuclear weapon and addressing our concerns with the sunset dates, taking strong action if Iran refuses IAEA [International Atomic Energy Agency] inspections, and preventing Iran from developing or testing a long-range ballistic missile,” the official said. “There is broad agreement on the areas that need strengthening, but how that’s done in each of the three areas is the subject of our negotiations.”

In his latest report, Nagel outlines numerous areas where the deal could be strengthened in order to cut off Iran’s pursuit of nuclear technology and arms.

This includes “anywhere, anytime” inspections at all civilian and military sites anywhere in Tehran. This has long been a sticking point, with Iranian officials repeatedly declaring that military sites are off limits.

A full account of Iran’s previous weaponization activities also must be written into a new agreement, according to Nagel. This would include a list of all military facilities that may have been used for such work.

“The termination of restrictions on Iranian nuclear activity is fast approaching,” according to Nagel. “Washington and its allies must fix the fatal flaws of the nuclear deal and prevent Iran from becoming a threshold nuclear state.”

“The fixes that are necessary to rectify the problems with the JCPOA are significant,” he writes. “Superficial and cosmetic amendments or efforts to paper over the flaws will only exacerbate the long-term problem. There is an urgent need to fix the nuclear deal, and prudence dictates that nations must have a ‘Plan B’ should current efforts fail to prevent Iran from continuing down the nuclear weapons path.”