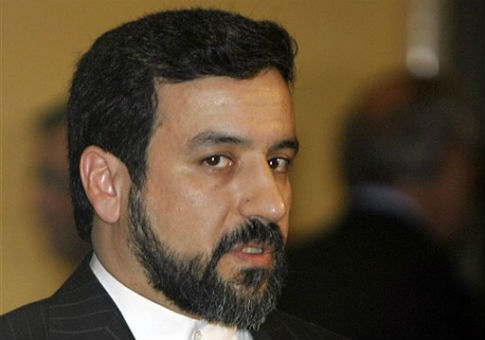 A senior Iranian official who led the negotiations with world powers that led to the recent nuclear deal said that the Islamic Republic will continue to import and export arms freely across the globe without restriction, according to recent comments flagged by the CIA’s Open Source Center.

Abbas Araghchi, Iran’s deputy foreign minister, said that he insisted during the negotiations that Iran be able to purchase and ship military hardware at any time and from any place, according to the comments made on state-controlled television.

Araghchi vowed “to buy weapons from wherever possible, and [said that Iran] is to provide weapons to whomever and whenever it considers appropriate,” according to a translation of his comments made by the Open Source Center.

The issue of Iran’s ability to purchase and move arms has emerged as a key concern among critics of the Obama administration’s deal. As part of the agreement, Iran will allowed to import and export weapons.

Araghchi claimed that the deal goes further. Iran will not adhere to any current restrictions of its arms trade, he said.

This could complicate efforts by Western nations to rein in Iran’s rogue behavior in the Middle East and elsewhere. Iran has played a central role in arming militias in Yemen and in backing President Bashar al-Assad in Syria. The terror group Hezbollah is also a top recipient of Tehran’s financial and military support.

“When they [the P5+1] said that they were not going to lift weapons and missiles sanctions, or at least not immediately, we explicitly told them that there could be no agreement because we will not sacrifice our national security for anything,” Araghchi was quoted as saying during the interview with an Iranian television network.

“With regards to our national security, our defense systems, and our missiles systems, we are not even willing to negotiate, let alone compromise,” Araghchi claimed he told the global powers in the negotiating room.

Araghchi went on to insist that “if you want to have an agreement in which sanctions imposed on us for weapons and missiles will continue, then we will not agree.”

This demand “was made clear to the other party,” according to the Open Source Center’s analysis.

Critics of the nuclear deal have also raised concerns about other parts of the deal that will allow Iran to continue work on ballistic missiles and nuclear enrichment.

Senior Iranian officials have also declared in recent days that no American inspectors will be permitted to enter any Iranian nuclear site. No inspectors—American or otherwise—will be allowed to enter Iran’s military sites, these officials claimed.

Javad Zarif, Iran’s foreign minister, said in a recent interview that the United Nations version of the nuclear deal—which was recently approved by the Security Council—leaves all restrictions on Iran’s ballistic missile program as “non-binding.”

“The next redline was refusal to allow inspection or refusal to accept any restrictions in the defence and missile spheres, which has been fully achieved through the deal. This is even stipulated in a UNSC resolution in an acceptable form, and this has been reported to the Supreme Leader’s office,” said Zarif on Iranian radio, referring to Ayatollah Ali Khamenei.

“Through severe resistance of the [Iranian] negotiating team, the opposite party fully abandoned its previous request of the inspection and verification of the missile programme and tests,” Zarif claimed, according to a translation of his remarks made by the BBC.

Michael Rubin, a former Pentagon adviser and expert on rogue regimes, expressed concern that less than a week after the deal was announced, Iran is already challenging U.S. claims about what the agreement does.

“It’s embarrassing enough when the supreme leader and Revolutionary Guards suggest less than full acceptance of the nuclear deal, but the agreement isn’t even a week old and already Iran’s chief negotiator is contradicting Secretary of State John Kerry,” Rubin said. “Call it the Tehran two-step: one step forward, and two back. The only interesting thing is how Kerry and crew are going to rationalize Araghchi’s statements.”

Rubin said the deal is becoming more problematic as the world learns more details about it.

“This nuclear accord will not bring peace; rather, it has simply opened the floodgates to murder and mayhem on a scale the region hasn’t seen in decades,” Rubin said. “The Iranians are basically saying they will provide rocket-propelled grenades and explosively-formed projectiles anytime, anywhere. Only when they say anytime, anywhere, they actually mean it.”