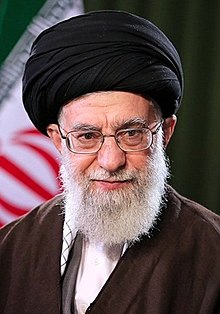 Iranian Supreme Leader Ayatollah Ali Khamenei is calling on America to “make guns illegal” in light of deadly shootings that have taken place across the United States, according to comments made by the Iranian leader over the week.

Khamenei, who has instructed his government to spend billions of dollars on military hardware and ballistic missiles, lashed out at the United States over the weekend, calling on America to ban all guns in light of a series of domestic shootings.

“No one dares apply the clear solution to the promotion of guns and homicide in America. What’s the solution? It’s to make guns illegal,” Khamenei wrote on Twitter.

In a sweeping thread that touched on gun violence and the homicide rate in America, Khamenei criticized the U.S. “gun lobby” and called on America to ban weapons.

“In U.S., 100s are killed every week by homicide for no crime,—no reason—not at the hands of police, as US police brutality is a separate issue,” the Iranian leader wrote. “The accessibility of guns leads to homicide; it’s created problems for a country like U.S., everyone admits, fears, & is concerned about it.”

Khamenei also accused U.S. lawmakers of corruption and of kowtowing to the gun industry, which has lobbied against certain restrictions on firearms.

“Gun companies are so powerful that House representatives and U.S. senators don’t dare pass prohibition of guns, and U.S. president doesn’t dare speak out, rise against it,” he wrote. “This is corruption.”

“Corruption means domination of a mafia greedy for power & wealth, in a way that the big political & military system like U.S. won’t dare stand up for prohibition of guns—which is clearly positive,” the leader added. “This is due to lack of spiritual ideals, leading western societies to this point.”

Khamenei’s call comes on the heels of a series of protests across Iran in which dissidents took to the streets to rally against what they viewed as the Khamenei government’s own corruption.

The protestors criticized Iranian leadership for spending billions of dollars it received as a result of the landmark nuclear agreement on weapons and foreign military intervention in the Middle East, including in Syria, Yemen, and elsewhere.