Iran’s pursuit of the bomb: Sanctions have failed 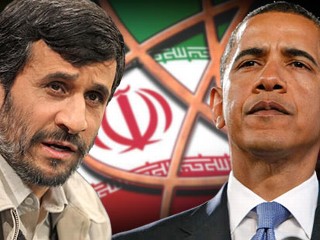 Economic sanctions on Iran have failed in their “principal objective” of preventing Tehran from obtaining nuclear weapons, according to a nonpartisan study by the Congressional Research Service (CRS).

Sanctions “have not stopped Iran from building up its conventional military and missile capabilities, in large part with indigenous skills,” according to the report, which was released earlier this week.

Western economic sanctions on Iran, which President Obama’s administration says are the toughest in history, have not been able to stop Tehran from clandestinely shipping weapons to the embattled regime of Syrian President Bashar al-Assad, which continues to slaughter opposition forces and citizens alike in a bloody conflict that has spanned over a year.

“Iran is also judged [to be] not complying with U.N. requirements that it halt any weapons shipments outside its borders, particularly with regard to purported Iranian weapons shipments to help the embattled Asad [sic] government in Syria,” the report states.

The study complicates arguments made by the Obama administration and others who maintain Western sanctions have brought Iran to the brink of economic collapse, possibly forcing it to abandon its clandestine nuclear enrichment program.

“The CRS conclusions demonstrate the error of Obama administration claims that their Iran policy is working,” Elliott Abrams, former adviser for President George W. Bush, told the Washington Free Beacon. “Sanctions hurt Iran’s economy, but that is not our goal; forcing change in their nuclear program is the goal and sanctions have not achieved it.”

Sanctions have not deterred Iran from behaving erratically, Abrams said.

“Iran continues its nuclear weapons program, supports terror, builds missiles, and most recently is supporting the Assad regime’s murderous policy in Syria,” Abrams said. “The sanctions have failed to deter the Iranian regime from any of this pernicious and dangerous activity.”

CRS, a nonpartisan organization, states clearly in its report that sanctions are not working as intended.

“The principal objective of international sanctions—to compel Iran to verifiably confine its nuclear program to purely peaceful uses—has not been achieved to date,” states the report, authored by CRS’ Kenneth Katzman, a specialist in Middle East affairs.

“Despite the imposition of what many now consider to be ‘crippling’ sanctions, some in Congress believe that economic pressure on Iran needs to increase further and faster,” the report notes.

The report examines over nearly 80 pages U.S. efforts to sanction Iran. It concludes that sanctions have failed to force Tehran to abandon its nuclear program, which continues mostly unimpeded, despite increasingly strong measures.

“There is a consensus that U.S. and U.N. sanctions have not, to date, accomplished their core strategic objective of compelling Iran to verifiably limit its nuclear development to purely peaceful purposes,” the report states.

Intelligence evidence indicates that Iran has increased its capability to enrich uranium to levels close to those sufficient for a nuclear bomb.

Foreign policy experts suspect the Iranian regime is insulated from the crippling economic effects of sanctions, including the recent collapse of Iran’s currency, the rial.

“Tehran likely has sufficient foreign exchange reserves to last well beyond the date that Iran will become a threshold nuclear power, which according to [Israeli Prime Minister Benjamin] Netanyahu is in the spring or summer of 2013,” Mark Dubowitz, executive director of the Foundation for Defense of Democracies (FDD), told the Free Beacon, citing studies performed by FDD.

“Even when facing imminent economic collapse, that meltdown would need to occur at least six months—and preferably much longer—before Iran reaches the nuclear threshold,” Dubowitz explained. “That would possibly allow time for the economic shock to cascade through the political system with the hope of convincing Iran’s leadership to change course. But that’s still a big assumption that economic collapse could break the supreme leader’s nuclear will.”

It also remains unclear if economic sanctions have directly set back Iran’s nuclear program in a significant way, according to CRS.

“A related issue is whether the cumulative sanctions have directly set back Iran’s nuclear efforts by making it difficult for Iran to import needed materials or skills,” the report notes.

Iran continues to increase its influence in the Middle East despite the sanctions regime, the report states.

“Sanctions against Iran have not, to date, clearly reduced Iran’s influence in the Middle East or its strategic capabilities in the Persian Gulf region,” the report notes. “Iran continues to financially and militarily support militant movements in the Middle East, including the exportation of arms to some of these movements, and to Syria.”

In addition to shipping arms to rogue regimes and terrorist groups, Iran is stockpiling ballistic missiles and domestically produced drones, some of which are capable of launching attacks on U.S. interests in the Persian Gulf.

Even the human rights situation in Iran has deteriorated.

“U.S. and international sanctions have not, to date, had a measurable effect on human rights practices in Iran,” the report states.

Some insiders argue that the Obama administration must alter its goal of pushing Iran to the bargaining table. They maintain that regime change is the only solution.

“It doesn’t take a CRS report to tell us what we already know—Iran is pursuing nuclear weapons capabilities despite current sanctions,” said one Iran sanctions expert on Capitol Hill who requested anonymity. “It’s time to accept the basic truth that the objective of sanctions moving forward should be regime change from inside Iran, and that is an achievable objective.”

Adam Kredo is senior writer for the Washington Free Beacon.