‘Irreversible’ Arctic Ice Loss Seems To Be Reversing Itself 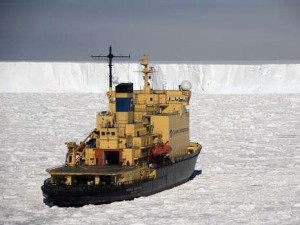 For years, scientists have been warning the Arctic was in a “death spiral” and could soon be ice-free during the summertime and shrink to unprecedented levels due to man-made global warming. Such ice loss could be “irreversible,” some scientists claimed.

But new research from the Scripps Institution of Oceanography says that predictions of an ice-free Arctic are based on “oversimplified” theories. Scripps researchers, who were co-funded by the Navy, found that the Arctic sea ice may be “substantially more stable than has been suggested in previous idealized modeling studies.”

“We found that two key physical processes, which were often overlooked in previous process models, were actually essential for accurately describing whether sea ice loss is reversible,” Scripps climate scientist Ian Eisenman, co-author of a new study refuting claims the Arctic is in a “death spiral,” said in a statement.

“Our results show that the basis for a sea ice tipping point doesn’t hold up when these additional processes are considered,” echoed Till Wagner, also a Scripps scientist. “In other words, no tipping point is likely to devour what’s left of the Arctic summer sea ice. So if global warming does soon melt all the Arctic sea ice, at least we can expect to get it back if we somehow manage to cool the planet back down again.”

“If the associated parameters are set to values that correspond to the current climate, the ice retreat is reversible and there is no instability when the climate is warmed,” according to Eisenman and Wagner’s study.

Eisenman and Wagner’s study comes after the Arctic hit its lowest maximum sea ice extent on record during February. This was followed by the Arctic having its lowest ice extent for March on record, according to the National Snow and Ice Data Center. Indeed, Arctic sea ice has been declining at a rate of 2.6 percent per decade since 1979.

Scientists and climate pundits have already predicted this year’s Arctic summer sea ice extent will be the lowest on record, following poor winter extent. This has only bolstered claims that the Arctic could soon be ice free.

“Summertime Arctic sea ice is not long for this world,” lamented Joe Romm, a climate scientist and editor for the liberal blog ThinkProgress. “Because of Arctic amplification, the Arctic warms twice as fast (or more) than the Earth as a whole does.”

Romm goes on to cite a February study claiming that Arctic ice is losing its thickness and becoming more susceptible to warmer weather — meaning it’s melting a lot faster. The study, published in the journal The Cryosphere found that “annual mean ice thickness has decreased from 3.59 meters [11.8 feet] in 1975 to 1.25 m [4.1 feet] in 2012, a 65% reduction.”

It wasn’t long ago that David Barber, Canada’s Research Chair in Arctic System Science at the University of Manitoba, warned there was almost no multi-year ice left in the Northern Hemisphere.

“We are almost out of multiyear sea ice in the northern hemisphere,” he told Canada’s Parliament in 2009. “I’ve never seen anything like this in my 30 years of working in the high Arctic … it was very dramatic.”

Arctic sea ice extent that year was at its third-lowest extent on record, behind 2007 and 2008, and experts were saying there would be no polar ice during the summer by 2030 for the first time in one million years.

“I would argue that, from a practical perspective, we almost have a seasonally ice-free Arctic now, because multiyear sea ice is the barrier to the use and development of the Arctic,” Barber said.

But such predictions have fallen flat, as the Arctic has seen a resurgence of multi-year ice since 2009.

NSIDC and European satellite data show that multi-year sea ice made a big comeback in 2013 and 2014 — increasing from 2.25 to 3.17 million square kilometers during that time and making up 43 percent of the north pole’s ice pack.

“Global sea ice is at a record high, another key indicator that something is working in the opposite direction of what was predicted,” Dr. Benny Peiser, director of the Global Warming Policy Forum, told the U.K. Express in January.

“Most people think the poles are melting… they’re not,” he said. “This is a huge inconvenience that reality is now catching up with climate alarmists, who were predicting that the poles would be melting fairly soon.”