Freedom Centers Constitutional and Political Freedom It’s the Law and Most Americans Oppose It ...

It’s the Law and Most Americans Oppose It 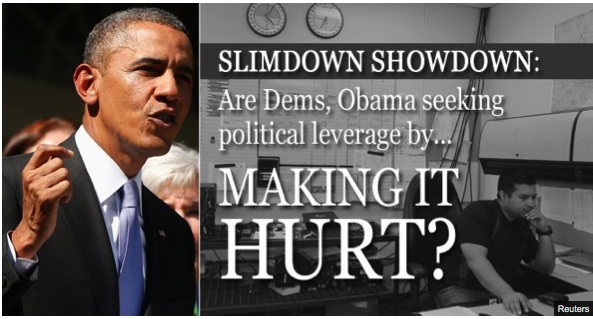 More than three and a half years after the Democrats passed Obamacare into law, the overhaul’s exchanges — its East German–like government marketplaces — finally, sort of, open for business. The Democrats fully expect their fellow Americans to be so excited about buying government-approved insurance through these government-run exchanges that they’re choosing to shut down the government rather than delay the individual mandate for a year. Better to shut down the government, it would seem, than let Americans freely decide — even for a year — whether or not to buy Obamacare-based insurance.

Alas, the individual mandate’s penalties will be low enough, and the cost of insurance under Obamacare will be high enough, that most people — especially younger, healthier people — will likely decide that the Obamacare fine beats the Obamacare product. But the Democrats need to get as many people to buy Obamacare-based insurance as possible, and they know that the individual mandate will often be the key to making — or coercing — the sale. So funding for the rest of the federal government can wait. Such is the strange state of play as we enter the last quarter of 2013, and hence the first quarter of the new fiscal year.

Perhaps even stranger, yet not altogether surprising, is the Democrats’ new favorite line of argument about Obamacare — namely, that it’s the law and therefore not only Republicans but all Americans should just deal with that. The clear implication is that the American people are powerless to act, through their elected representatives, to repeal laws they don’t like. This, of course, is ridiculous.

Here’s a quick question: If 95 percent of all polls across three and a half years, and 100 percent of polls in the past six months, had shown support for Obamacare — with a supermajority of polls showing double-digit support — do you think the mainstream press might mention that with some regularity?

Jeffrey H. Anderson is executive director of the newly formed 2017 Project, which is working to advance a conservative reform agenda. This article was also published at National Review Online.