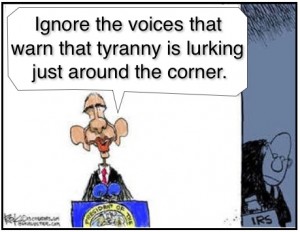 No more expressions of concern for systematically violating the constitutional rights of American citizens.

Just end it. Move on. Pretend it never happened.

And why not? After all, President Obama won reelection, his base hates the Tea Party anyway (and believes conservatives deserve any punishment they get), and the media had moved on to covering national catastrophes – like lane closures in New Jersey.

So it was time to end the pretense.

Earlier this week, the Wall Street Journal reported that the FBI did not expect to file any criminal charges in connection with the IRS’s admitted, systemic, multi-year targeting of conservative nonprofits for improper scrutiny.

To be clear, the FBI made this decision without interviewing even a single one of the American Center for Law and Justics’s 41 targeted clients. And we’re not alone. Other Tea Party attorneys report their clients weren’t interviewed either.

Put simply, the FBI leaked its conclusions in a criminal investigation without even interviewing the victims of the potential crime.

It’s inexcusable, but hardly surprising. After all, just days before the FBI leaked its determinations, the news broke that the Department of Justice attorney in charge of the investigation was a longtime, significant donor to President Obama.

She began her cycle of donations on January 30, 2008 – early in the primary season and just days after then-Senator Obama defeated Hillary Clinton in the South Carolina primary. Her donations totaled nearly $7,000 over the years – putting her in the top tier of financial contributors to President Obama’s campaigns.

Moreover, this partisan attorney came from the DOJ’s civil rights division, its most partisan division.

Reviewing the timeline, it’s easy to see how quickly the Obama Administration reversed course from public contrition and damage control to aggressive anti-conservative spin – and now to burying this scandal.

On May 10, 2013, the IRS’s Lois Lerner admitted to systematic targeting, blamed lower-level employees, and apologized on behalf of the IRS.

On May 14, with the media in full cry (for the first time in the Obama Administration), Attorney General Holder announced a criminal investigation, and the next day President Obama condemned IRS misconduct.

In June, FBI Director Mueller was unable to even identify the lead investigator of the investigation. By July – only two months later – the IRS scandal transformed from a source of outrage to a “phony scandal,” with the President openly dismissing its significance in public statements.

In the months since, the message from the White House has been the same: Move along. Nothing to see here.

And throughout, our clients waited – patiently – for the phone to ring. And it didn’t ring until late December, more than seven months after Lois Lerner’s apology.

Then, before the first interview could be arranged, the news broke of the partisan investigator followed quickly by the news that the results were predetermined.

Representatives Darrell Issa and Jim Jordan are correct. It’s time to investigate the investigators. The Department of Justice’s Inspector General should launch his own investigation, and that investigation should answer a few, key questions:

Why didn’t the FBI interview the victims of the potential crime before making its determinations?

Why did the lead attorney’s record of partisan giving create an appearance of a conflict of interest within the meaning applicable federal regulations and local bar association rules?

How was the investigation conducted?

Did its conduct mirror that of other investigations, or was it cursory and conclusory – with a predetermined outcome?

Regardless of what ultimately happens in the criminal investigation, the Obama Administration is mistaken if it thinks it can use its considerable resources and executive discretion to insulate itself from accountability.

It may be able to appoint partisan investigators within the DOJ, stonewall congressional investigators (for now), and intensify efforts to publicly sweep this unlawful targeting scheme under the rug, but it still faces civil litigation and accountability before a federal judge.

Our ACLJ lawsuit on behalf of 41 clients in 22 states is ongoing.

Discover looms in the case, and we will get to the bottom of one of the most significant – and consequential – political scandals in recent American history.

Justice may be delayed, but it will not be denied.

Jay Sekulow is Chief Counsel of the American Center for Law and Justice. This article was published at FoxNews.com.